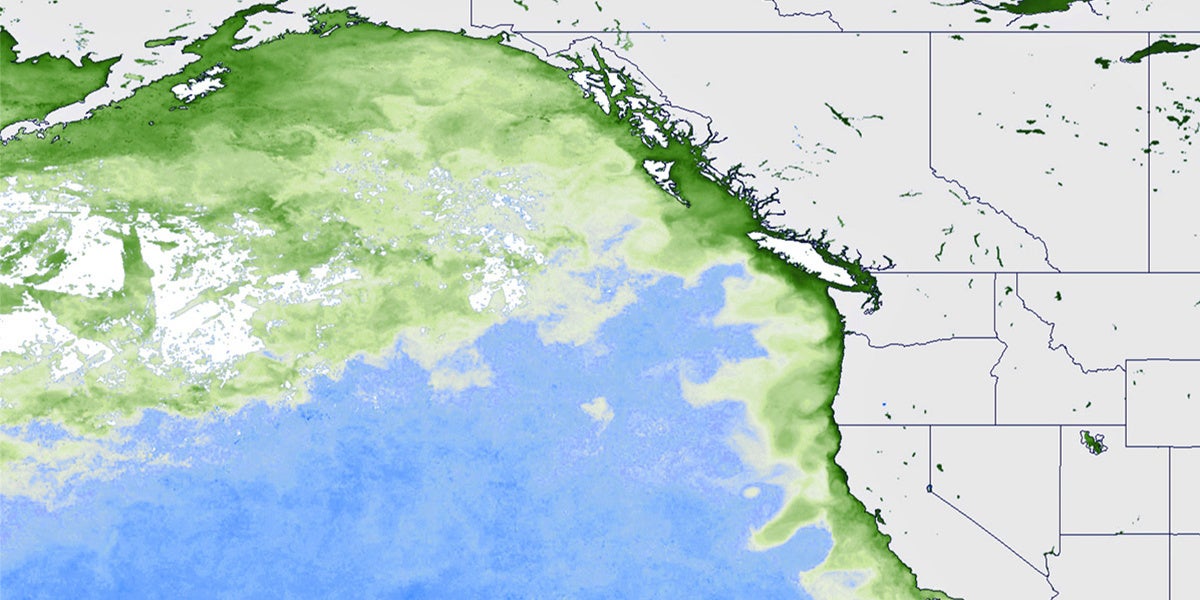 Record-setting bloom of toxic algae in North Pacific in 2015. NOAA

It’s not just land-based heatwaves that have become
more intense and frequent. Marine heatwaves are similarly on the rise as a direct result of warming oceans, according to a new international study.

These bursts of ocean heat can have
widespread effects on underwater ecosystems, marine life and coastal communities.

As a
press release for the study detailed, a 2011 marine heatwave in Western Australia shifted ecosystems from being dominated by kelp to being dominated by seaweed. That shift remained even after water temperatures returned to normal.

Then in 2012, a marine heatwave in the Gulf of Maine caused an increase in lobsters but resulted in a crash in prices that seriously hurt the industry’s profits.

Warm waters in the North Pacific from 2014-2016 led to fishery closures, mass strandings and harmful algal blooms along coastlines. In 2015, the U.S. West Coast’s mysterious “blob” of water, up to 4°C warmer than the surrounding Pacific, became tied to unusual weather across the country.

Another
intense marine heatwave in 2016 off Tasmania led to disease outbreaks and impacted the region’s oyster and salmon industries.

“Our research also found that from 1982 there was a noticeable acceleration of the trend in marine heatwaves,” said lead author Dr. Eric Oliver, a researcher at Dalhousie University in Canada.

“While some of us may enjoy the warmer waters when we go swimming, these heatwaves have significant impacts on ecosystems, biodiversity, fisheries, tourism and aquaculture. There are often profound economic consequences that go hand in hand with these events.”

The heatwave that is causing the large-scale degradation of the seagrass in our study https://t.co/kYxkX4INx6 is also clearly visible in the data of this new and important read from @NatureComms https://t.co/X5UByPWyw7

The researchers combined satellite data with a century-long range of datasets, taken from ships and various land-based measuring stations, to determine the trend of intensifying marine heatwaves. They eliminated natural warming variables caused by the El Niño Southern Oscillation, the Pacific Decadal Oscillation and the Atlantic Multidecadal Oscillation to come to their conclusion.

“With more than 90 percent of the heat from human-caused
global warming going into our oceans, it is likely marine heatwaves will continue to increase. The next key stage for our research is to quantify exactly how much they may change,” she said.

“The results of these projections are likely to have significant implications for how our environment and economies adapt to this changing world.”