L.A. Neighborhood Learns About Methane Blowout a Week After It Happened 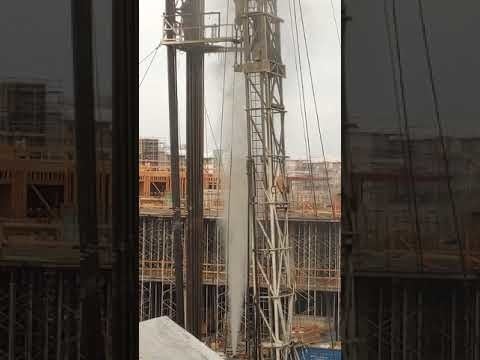 Residents, lawmakers and environmentalists from a seaside community in Los Angeles County are questioning why it took a whole week for government officials to inform them of a well blowout that sprayed natural gas and other fluids nearly 60 feet into the air for several minutes.

On Jan. 11, hotel construction workers in a populated area in Marina del Rey dug into an abandoned, 1930s-era oil well, causing an eruption of mainly methane, heavy abandonment mud and water. Video footage shows the fluids shooting high into the sky, and a worker rappelling away to avoid injury. The oil well was last sealed in 1959 and was in the process of being re-sealed before the release.

But government officials did not notify the public about the incident for at least a week, LAist reported, prompting major concern from local residents and L.A. City Councilman Mike Bonin, who said on Facebook that “the site is immediately across the street from the homes of several hundred City residents I represent.”

“I am particularly concerned at the lack of notification to neighbors, and at continued risks of leaks due to a potential lack of structural integrity of the well, which state officials said was a ‘serious concern.’ This incident also raises concerns about other old and abandoned wells in the area,” he added.

On Jan. 18, the California State Department of Oil Gas & Geothermal Resources (DOGGR) issued an emergency order to bring the well under control, to permanently plug the well and to investigate why it occurred.

The statement noted that the Jan. 11 blowout was a threat to life, health, property and natural resources.

“Because of the serious concerns about the structural integrity of the well and the sensitive location of the well, efforts to secure the site and properly plug and abandon the well must be undertaken without delay,” DOGGR stated.

The Los Angeles County Department of Public Health issued an incident update on Jan. 23 that said DOGGR learned of the incident on the afternoon of Jan. 11 and that “the leak was quickly contained and first responders reported from the scene that there was no continuing methane release.”

“The well currently is emitting no gas and there is no emergency impacting public safety,” the update stated.

Still, residents, lawmakers and environmentalists are wondering why state and local government officials failed to notify residents as soon as the leak was discovered.

The public costs of oil extraction are huge and long-term. We must move quickly toward a future free of fossil fuel, and we must end neighborhood oil drilling even faster. h/t @LAist https://t.co/STz5lZSaxk

Briana Mordick and Damon Nagami of the Natural Resources Defense Council (NRDC) are demanding accountability and transparency from DOGGR and other responsible state and local agencies, especially since DOGGR was one of the agencies that dealt with the infamous 2015 Aliso Canyon gas leak that impacted thousands of residents of near Porter Ranch and caused significant environmental damage from methane pollution.

“People living near oil and gas operations have a right to know what’s happening in their communities,” Mordick and Nagami wrote.

“California is home to some of the densest urban oil and gas drilling anywhere in the U.S., with homes, schools, parks, and beaches located in some cases just tens of feet from oil and gas wells,” they continued. “Nearly five and half million people in California live within one mile of an oil and gas well. It’s also home to more than 140,000 plugged and abandoned wells, like the one in Marina Del Rey.”

“Whether it is their production or their use, they threaten our environment and our safety,” he wrote “That is why I support aggressive measures to transition to 100 percent renewable energy sources, why I support the STAND-LA effort to impose a safe buffer from fossil fuel extraction and sensitive uses such as schools and residences, and why I am calling for additional investigation of this incident and greater assurances that my constituents are safe.”

We call on our elected officials and regulators to fully investigate this incident and decommission these dangerous wells and infrastructure that are threatening the safety and health of our community! #ShutItALLDown@MayorOfLA @MikeBoninLA @GavinNewsom pic.twitter.com/omuNNMocwS