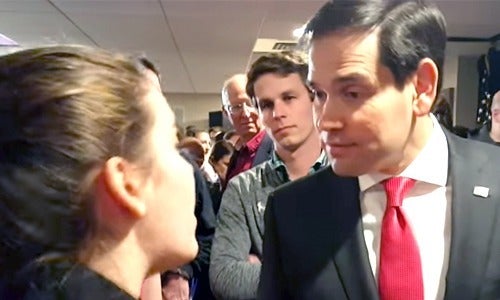 When asked by Annika Barth, a New Hampshire resident and freshman at American University, if he would support a Department of Justice (DOJ) investigation on all that Exxon knew about climate change, Republican presidential candidate Marco Rubio referred to the investigation as “nothing but a left-wing effort to demonize industries in America.”

Contrary to Rubio’s perception, Exxon is not being investigated for their political views, but rather for actively misleading the public and their investors on their extensive knowledge of climate change. A series of investigative reports revealed that as early as the 1970s, Exxon knew that burning fossil fuels caused climate change, but spent millions to sow public doubt around their own research. Just yesterday, in light of these reports, Vermont Gov. Peter Shumlin called on the state’s pension funds to divest their holdings in Exxon.

Now, momentum is growing to prosecute Exxon for their climate lies. New York State Attorney General Eric Schneiderman has launched an investigation to uncover all Exxon knew. All three Democratic presidential candidates, as well as more than 60 prominent indigenous peoples, social and environmental organizations, have called on Attorney General Loretta Lynch to launch an investigation. Sec. of State John Kerry has also supported a DOJ investigation, saying Exxon “stands potentially to lose billions of dollars in what I would imagine would be one of the largest class-action lawsuits in history.” Organizers across the country are urging their state Attorney Generals to launch similar investigations.

To date, Rubio has accepted more than $13,500 in funding from ExxonMobil according to DirtyEnergyMoney.org. That amount doesn’t include donations from Exxon employees, nor any support that the corporation may have already made to Rubio’s presidential campaign or Super PACs supporting his candidacy.