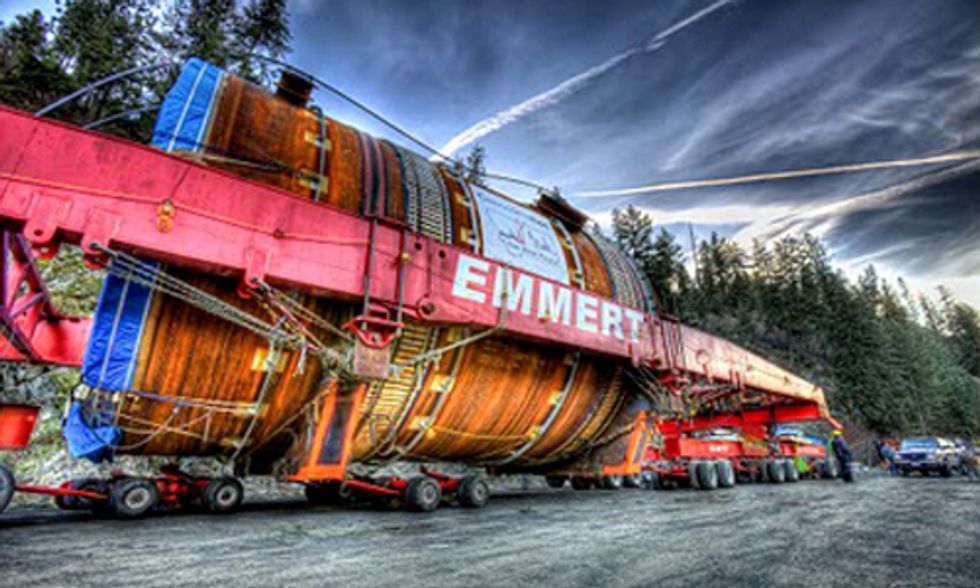 In 1877 Chief Joseph and his Nez Perce Tribe of women, children and warriors were pursued for 1,500 miles across the Northern Rockies as they struggled to reach refuge in Canada. These Native Americans posed no real threat to white settlers, but the pursuit of them was regarded as a path to "progress"—twisted as the concept might have been at the time. After evading, outrunning and outfighting the heavily fortified U. S Army, the Indians were halted just 40 miles short of their safety. The Nez Perce's resistance caught the attention of the public, with many people rooting for the underdogs. Among all the conflicts with Indians, the drama of the Nez Perce has captured the sympathy of Americans perhaps more than any other event.

Now the Nez Perce have again risen to fight along the Idaho-to-Canada route, this time allied with a feisty band of river conservationists bearing the name of Idaho Rivers United.

In order to extract and export oil from the seeping black tar sands of Alberta, energy corporations insisted on shipping "mega-loads" of equipment, some measuring 30 feet wide, three stories high and a football-field in length, consuming two full lanes of highway from Lewiston, Idaho to Canada. Hundreds of loads were expected. The scenic route includes passage along the exquisitely transparent, fish-filled Lochsa River. Idaho's Department of Transportation granted permission to commandeer the highway, but overlooked two significant details: the Indians' treaty rights, along with a Congressional mandate that the U.S Forest Service protect one of America's premier National Wild and Scenic Rivers. The Lochsa ranks among the prestigious twelve streams that were initially designated in this National-Park-like system, which has grown to include our most iconic rivers—the Salmon, Rogue and Allagash among others.

The largest available semi-trucks simultaneously pull and push the rolling industrial behemoths like over-stressed railroad trains and block all traffic in their path. The Indians and river aficionados maintain that the loads infringe on the dedicated values of the Wild and Scenic River and also those of the Reservation. The groups cite public nuisance and safety hazards.

In February 2013, a federal judge ruled that the Forest Service—resisting involvement in the issue—had authority to regulate the mega-loads. After road-blocking protests and the arrest of 28 Indians, further shipments were halted by a court order in autumn 2013, effective until the Forest Service fully considers the problem and its consequences to the scenic corridor that the agency is obligated to protect. For now the loads have stopped rolling, but the long-term outlook for this premier Northwestern river corridor will remain uncertain until further protective measures are taken.

While final evidence will be clear only after Forest Service study is completed, Idaho Rivers United maintains that the Wild and Scenic legislative mandate to "preserve" the river and its "immediate environments ... for the benefit of present and future generations" is incompatible with mega-load intrusions. Nor is this industrialization what the Nez Perce had in mind along their preciously small remnant of original homeland that the Government finally agreed was theirs. Broadening this perspective, American Rivers in April announced that the Lochsa ranked among the top ten "most endangered" rivers in the nation.

American Rivers announced that the Lochsa, a river threatened by mega-loads, ranked among the top ten "most endangered" rivers in the nation. Photo credit: Tim Palmer

The Indians and river guardians have a case. The judge agreed. And even more poignant, their modern story of defense in this sublimely beautiful corridor of conifers and cascading whitewater speaks to a larger crisis we all face in America. Hundreds of miles from the oilfields and the hotly contested pipelines, the march of energy development plods forward. The oil will be burned thousands of miles away to advance consumers' convenience, corporate profits, and the climate crisis that the world's scientists—along with everybody bearing a conscience for the fate of future generations—say we deny at our peril. Here along a brilliant river, in the heart of a cherished homeland, the march of the mega-loads will tell us who, in fact, is dictating the fate of America.

The Nez Perce were confronted by artillery 137 years ago when they simply sought refuge across the border. But now it is they and their river-loving allies who have road-blocked this route to Canada. The tables, for awhile, seem to have turned, giving all of us the opportunity to question what "progress" means in our own day, and to consider where we are bound, the paths we're taking to get there, and the prices we're willing to pay to burn more oil.

Olivia Rosane
Politics
New Zealand could be the first country in the world to require its major financial institutions to report on the risks posed by the climate crisis. Lawrence Murray / Wikimedia Commons / CC by 2.0

Eco-friendly outdoor brand Patagonia has a colorful and timely message stitched into the tags of its latest line of shorts. "VOTE THE A**HOLES," it reads.