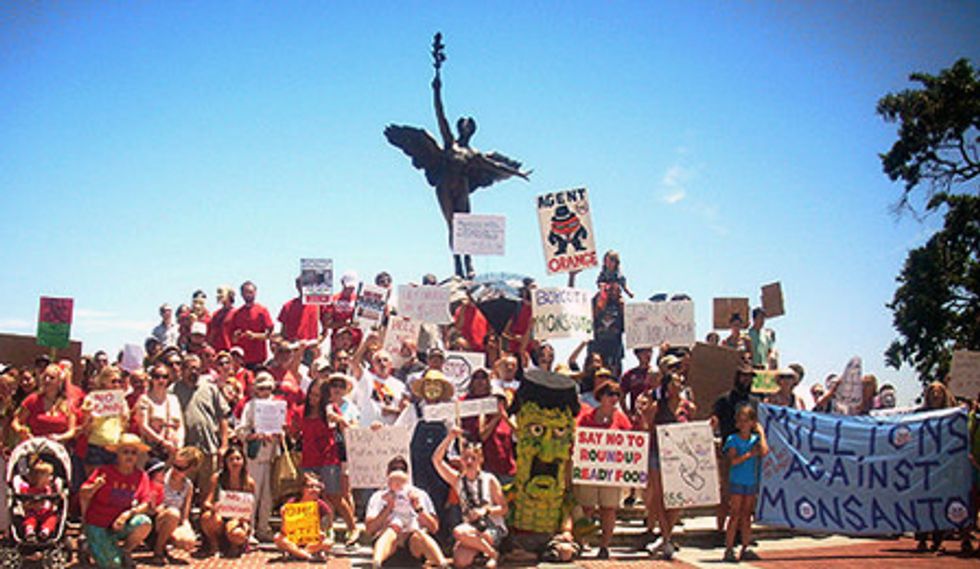 Just 48 hours after the U.S. Senate overwhelmingly rejected an amendment that would allow states to require labeling of genetically engineered (GE) foods, more than 1,000 people filed into the Federal Plaza in Chicago, IL, on May 25 to march against Monsanto, the company whose policies have brought the problem of genetically modified food to the forefront.

The Chi-Nations of the American Indian Community began the demonstration with a hand drum song and round dance.

Julio Gomez and David Bender at the March Against Monsanto in Chicago, IL, on May 25. Photo Credit: People's World

"The world is being introduced to what's been an Indian problem for years. Our heirloom seeds are almost gone, bees are dying off ... our culture is under attack," said Justine Pochel, an active member in the American Indian community and mother of two. "We need to honor our relationship to land and these plants are that connection. These plants are our relatives."

"Traditional culture will be the salvation. Mitakuye Oyasin means [in Lakota] living as one—water, plants, animals, the earth and people are all related. People need to realize we're all connected like a spider web. If one piece of the web breaks than we're all in danger," she replied when asked how to counter Monsanto's aggressive agenda.

Monsanto's opponents say the food system has become more corrupt, highlighting the relationship between the food industry and the federal government.

"What's going on here is this revolving door between government and industrial agriculture. These giant companies are becoming more and more in collusion as they look to corporations to run government," according to Mike Durschmid, one of the march organizers. "It's to the point where the FDA even created a new position, deputy commissioner of foods, to push public policy specifically for Monsanto, a seat being held by former Monsanto attorney Michael Taylor."

Taylor has been accused of developing public policy to fit the needs of his former employer, Monsanto, an accusation that he denies.

"This is an attack on working-class people," according to Anthony Scorzo of the International Brotherhood of Electrical Workers. "With low wages becoming the norm, purchasing non-GMO products is economically unsustainable. Non-GMO products are inaccessible to a majority of the working class so it's basically another form of oppression and division."

GMO stands for genetically modified organism, which means its genetic material has been altered by mutating, inserting or deleting genes through genetic engineering.

Elijah Montress, a state public aid caseworker, has noticed the negative impact of GE foods as many of the clients coming to his office with diabetes and high blood pressure are young people, something that was unheard of 10 years ago. "There's definitely a correlation between the insurance and food industries. People on public aid don't have a choice. When you have less variety of food for a community it hampers their health without them knowing about it. If we were to have a single payer health care system, this problem could be easily addressed."

As a member of the American Federation of State, County and Municipal Employees, Montress sees food safety as an issue that the labor movement should be a part of, "because it needs to grow solidarity ... needs to expand beyond craft and trade. A threat to humanity anywhere is a threat to labor everywhere."

Currently, a bill, SB 1666, is being proposed in the Illinois Senate that will require companies to label foods as GMO. "The main thing is to organize our communities," says Dorschmid, "and get to the people who vote and support policy makers who support SB 1666. We want supporters of SB 1666 to be supported as they push it through state. We need to let them know, we will remember in November."

"This is a march bringing together many different groups," said Earchiel Johnson, a member of the Young Communist League who was among the marchers. "I see anarchists, conservatives, libertarians, liberals and communists and people of all ages and ethnic groups. We are uniting to fight for healthy and safe food. This is what a mass movement against corporate greed looks like."

As the day proceeded, the crowd swelled as demonstrators marching through the streets continued to enter the Thompson Center. At one point the march was seven blocks long, taking two lanes of La Salle with people walking in both the street and on the sidewalk. It is estimated the total turnout was around 2,500 people in Chicago.

This action was part of a movement that spread via social media as people on the West Coast set up event pages in dozens of cities and then invited friends to attend with those friends, in turn, inviting their friends.

Protests took place in 52 countries across the globe against the lack of labeling for GE products and Monsanto's responsibility for the problem.