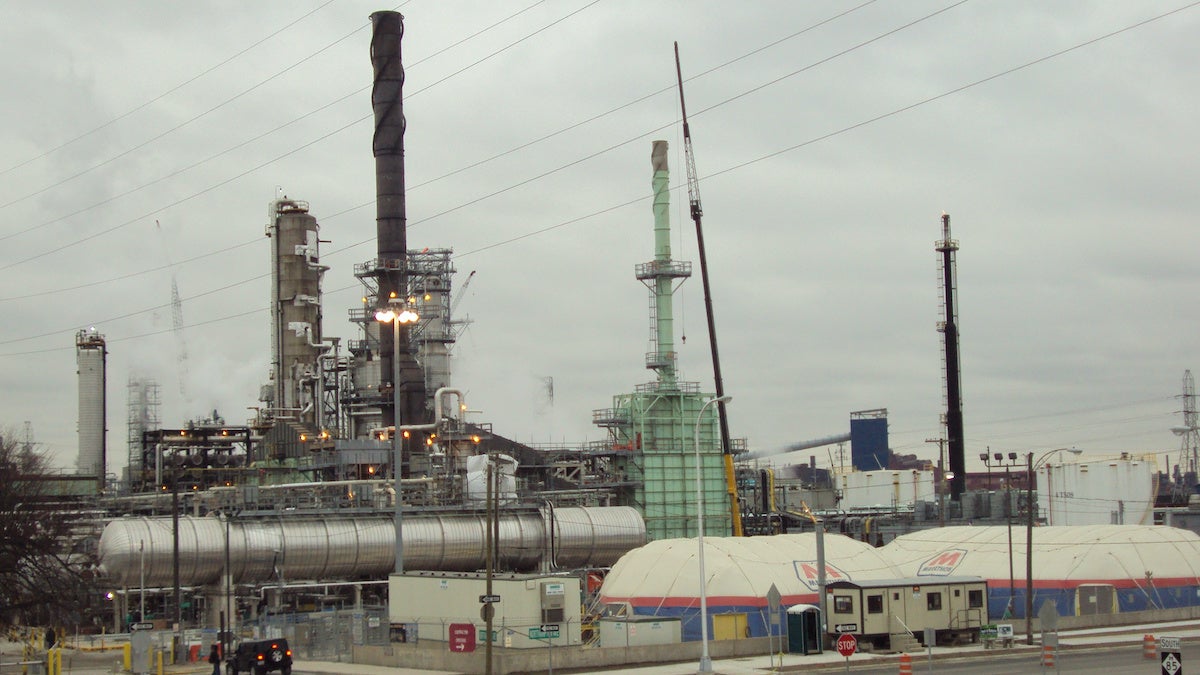 Marathon Petroleum, the largest oil refiner in the country, has a history of air pollution violations impacting low-income and Black and Brown communities. Notorious4life / Wikimedia Commons

By Sarah Thomas and Nathan Heffernan

Fossil fuel companies have reaped millions of dollars in benefits from a stimulus package intended to help struggling Americans and the economy. Among these is Marathon Petroleum, the largest oil refiner in the country, which has a history of air pollution violations impacting low-income and Black and Brown communities.

The CARES Act included several provisions to support businesses, one of which allowed companies to claim an immediate tax refund by deducting current operating losses from income taxes paid in the past five years. As a result of changes to allow the “carryback” of net operating losses, Marathon received 1 million in tax benefits, a sum even greater than their recent 4 million penalty for environmental violations. The Federal Reserve also included Marathon Petroleum in its recent purchase of energy bonds.

Oil and gas companies, like Marathon, are not violating any rules by claiming this tax benefit, but there are significant downsides to using public resources to prop up dirty companies with a history of air pollution violations in the midst of a pandemic that targets the respiratory system. As part of the paycheck protection program, a separate program under the CARES Act, at least billion in taxpayer dollars intended for small businesses have gone to over 5,600 U.S. fossil fuel companies and are being used to save an antiquated industry, rather than investing in a sustainable future that will benefit all Americans.

Democratic lawmakers have warned that this oil bailout is not only taking the funds meant for smaller businesses, but is also forcing taxpayers to pay for the industry’s past mistakes. Senators Brian Schatz and Sheldon Whitehouse wrote that the pandemic “was not the source of the oil and gas industry’s dire financial condition,” and that this bailout “poses both a credit risk and a more profound climate transition risk to taxpayers.”

Marathon Petroleum is just one example of an oil company that was already struggling prior to the COVID-19 outbreak, partly due to their expensive 2018 acquisition of rival refiner Andeavor. Oil companies have been pursuing such mergers in an attempt to generate investor excitement and make up for the structural weaknesses of the oil sector. More specifically, upstream companies have spent billions more on drilling than they receive from selling the produced oil and gas, which creates a condition known as negative free cash flow. Investing in oil stock has had a similarly negative trajectory, as the average U.S. oil producer over the past three years has produced a total return of negative 17%.

A History of Environmental Racism

The acquisition of Andeavor and other refineries has made Marathon Petroleum the largest refiner in the U.S. with a long list of costly penalties. All told, Marathon and its acquired companies have been fined more than .4 billion in environmental, consumer protection and workplace violations since 2000. A significant recent example was its 4 million settlement with the EPA in 2016 to reduce air pollutants in five states: Michigan, Louisiana, Ohio, Kentucky, and Illinois. The EPA announced that the required investments in air pollution controls would “help reduce emissions that can cause respiratory and cardiovascular health impacts, which can disproportionately affect low-income and vulnerable populations.”

Many of Marathon’s refineries have notably high indicators for Environmental Justice Indexes, signifying high levels of air pollution among minority and at-risk groups. For the 1-mile radius surrounding the Detroit, Michigan refinery, the surrounding communities score above the state 90th percentile for diesel particulate matter, air toxics cancer risk, and respiratory hazard index. The Canton, Ohio refinery additionally scores around the 75th percentile in these indexes. The Garyville, Louisiana refinery — located in Louisiana’s infamous “Cancer Alley” — scores in the 99th percentile country-wide for air toxics cancer risk. The Political Economy Research Institute lists Marathon as the 33rd worst air polluter in the nation, with an Environmental Justice Minority Share of 59%, meaning that its refineries disproportionately impact communities of color.

Despite the 2016 EPA settlement, communities living nearby to the refineries continue to face environmental injustices and deadly air pollution. In Southwest Detroit, the predominantly Black zip code 48217, the most polluted area in Michigan, is home to dozens of polluting facilities, including the Marathon Petroleum refinery. This residential area experiences higher rates of asthma and cancer than the rest of the country due to toxic pollution. Community organizers and environmental justice groups have protested the Marathon refinery over the past decade, calling for accountability from the oil giant and buy-outs for their now devalued property.

In September 2019, an alleged vapor leak sparked further protests as Marathon failed to inform residents of the dangers and health impacts of chemicals released. Prior to the September incident, an earlier vapor release in February of 2019 caused residents to complain of “a nauseating stench” and of “vomiting, troubled or labored breathing, and irritated eyes and throats” reported the Metro Times. The September incident prompted U.S. Rep. Rashida Tlaib and the U.S. House Committee on Oversight and Reform in February 2020 to request that the EPA undertake a formal investigation of the chemical leak by Marathon. The facility is the only oil refinery in Michigan, and as Metro Times reports “emits 29 different types of toxins, which waft across neighborhoods and puts residents at an elevated risk of cancer, respiratory disease, asthma, and liver failure.”

The impacts on nearby communities does not stop at environmental health. Marathon and its affiliates have also racked up nearly million in penalties for workplace safety or health violations, according to the Violationtracker website.

The CARES Act bailout to Marathon Petroleum, a significant air polluter, is further concerning given the lobbying ties the fossil fuel giant has with the Trump administration. In May 2020, the House Oversight Committee requested documents from Marathon Petroleum related to its extensive lobbying efforts related to Trump’s rollback of fuel economy standards — a rule change that has already been mired in scandal. In 2018, Gary Heminger, Marathon’s former CEO, told investors the new rule would help sell up to 400,000 more barrels of oil a day. The investigation seeks documents detailing meetings with top officials at the EPA and the Department of Transportation.

While the CARES Act is necessary for stimulating the economy during this crisis, large hand-outs to notorious air polluters must be scrutinized. Air pollution exposure has been linked to increasing incidence and severity of several respiratory infections that are similar to COVID-19. Residential areas surrounding oil refineries such as Marathon Petroleum are often predominantly Black communities, which are already affected disproportionately by the pandemic. The bailout money towards Marathon Petroleum maintains oil refineries that pollute surrounding communities, worsening the health and economic impacts of the Covid pandemic.

Our recovery from this crisis shouldn’t worsen existing public health problems or lock us into higher greenhouse gas emissions. We need a green and just recovery that puts us on a path to the sustainable future we need.

Reposted with permission from Greenpeace.