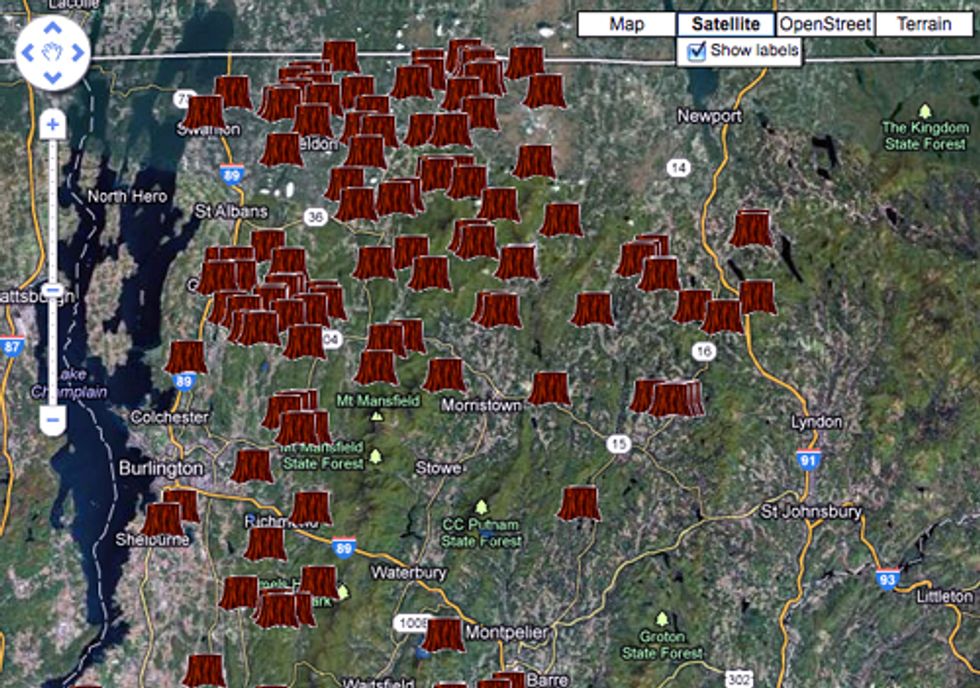 The first and only electronic map tracking logging sites sourcing wood to a biomass energy facility has been released by Energy Justice Network, a Washington, DC-based nonprofit organization with field offices in Vermont, Pennsylvania and Oregon, and Biofuelwatch, an international organization based in Vermont and the UK.

The initial phase of the McNeil Biomass Forest Mapping Project—funded by a grant from the Fund for Wild Nature—maps logging sites in Vermont that provided wood to the McNeil Generating Station in 2010, a 50-megawatt biomass power incinerator in Burlington. The map overlays nearly 150 forest sites logged in 2010—along with several photo galleries—on a satellite map of Vermont using Google Maps.

Each logging site is marked with an icon of a stump with further zooming in revealing a transparent blue polygon outlining the exact location of the cutting. Clicking on the stump brings up relevant data including acreage, town, property owner, logger, forester, date logged and documentation of the associated scans taken from Vermont Fish and Wildlife Department maps.

The McNeil project is integrated into Energy Justice Network’s Dirty Energy Mapping Project which pinpoints the locations of existing and proposed biomass and waste incinerators, nuclear reactors, natural gas and coal-fired power plants in the U.S. and documents grassroots community resistance to those facilities.

Once completed, the McNeil Biomass Forest Mapping Project will map logging for both the McNeil station and the 25-megawatt Ryegate Biomass Incinerator (in Ryegate, Vermont) over a ten year period from 2002-2012 to depict the actual forest footprint of industrial scale biomass energy. The finished project will include dozens of photo galleries showing on-the-ground impacts of biomass energy logging projects.

The maps of the logging operations—scanned from hard copies and replicated by hand using Google Maps—were accessed through the Vermont Department of Fish and Wildlife which has been tasked by the Vermont State Legislature to pre-approve management plans to log forests providing wood to the McNeil and Ryegate biomass power incinerators. Final biomass logging projects are approved by foresters employed by the McNeil facility and its co-owner Burlington Electric Department, with Fish and Wildlife officials rarely making site visits in advance of the logging and never after logging has taken place.

An estimated one-half to two-thirds of the wood fueling the McNeil incinerator is sourced from New York State, where logging sites are neither tracked nor made available to the public, according to the New York State Department of Environmental Conservation. Vermont is the only state in the U.S. requiring that a state agency keep track of forests logged for some biomass energy facilities.

The McNeil biomass incinerator burns an estimated 400,000 green tons of wood per year—seventy-six tons, or thirty cords, of whole-tree chips per hour—along with a small percentage of natural gas, according to Burlington Electric Department. The wood fueling the McNeil incinerator consists of 70 percent trees and woody materials cut directly from the forest, 25 percent from “residues” (wood chips and bark from local sawmills) and 5 percent from recycled wood. Along with tree tops and limbs (which contain the highest level of nutrient content of any part of the tree), the McNeil facility burns whole trees, as has been documented in this photograph.

McNeil sources its wood from “integrated harvest” logging operations, which typically involves “whole-tree” logging and includes clearcuts up to twenty-five acres, housing developments, and forest “thinning.” Whole-tree logging is more intensive than traditional logging since it removes the nutrient rich tree tops and branches from the forest which could otherwise provide habitat, prevent erosion and enrich forest soils. Along with wood for the incinerator, these “integrated harvests” also provide lumber, paper pulp and firewood. Some trees that could be used for furniture, paper pulp, particle board, firewood, mulch, compost (and occasionally lumber) are instead burned for electricity at less than 25 percent efficiency—effectively wasting three out of four trees.

“For the first time we’re showing the direct impact on forests from biomass incineration,” said Aaron Kreider, web developer for Energy Justice Network and lead designer of the mapping project. “Can you imagine what the impact of McNeil will be during its entire lifetime? Can you imagine what could happen to our forests if we convert dozens of large coal plants to biomass?”

At twenty-six years old, Burlington’s McNeil Generating Station is one of the nation’s longest operating biomass power incinerators. The incinerator is sited adjacent to the low-income, ethnically-diverse Old North End neighborhood, 200 yards from the nearest residence. McNeil is Vermont’s largest polluter, according to Planet Hazard.com.

In a recent controversy, the City of Burlington, Vermont’s Draft Climate Action Plan reported only a fraction of the carbon dioxide (CO2) smokestack emissions from McNeil—hindering the city’s efforts to accurately measure and reduce its carbon footprint, according to critics. The 50-megawatt facility is jointly owned by Burlington Electric Company, Green Mountain Power and Vermont Public Power Supply Authority.

More than 200 electricity-generating, wood-burning biomass power incinerators currently operate in the U.S., with another 200 proposed, according to Forisk Consulting. Though more and more of these facilities are being built across the nation—due, in large part, to generous federal and state “renewable” energy subsidies and incentives—the ecological footprint of existing industrial-scale biomass energy facilities has yet to be adequately assessed.

“Even as forest protection is increasingly recognized as one of the best defenses against climate change—while also critical to protecting water, soils and biodiversity—governments are putting into place policies and subsidies to cut and burn forests the world over for ‘biomass’ electricity and heat,” said Rachel Smolker of Biofuelwatch, an international organization based in the U.S. and UK. “They falsely refer to this as ‘clean, green and renewable,’ but it is a total disaster in the making.”

The McNeil Biomass Forest Mapping Project will make the logging operations for the McNeil and Ryegate biomass incinerators transparent and accessible to industry, government, media, scientists and members of the public, allowing for the documentation of actual, on-the-ground impacts associated with forest biomass energy. The ultimate goal of the project is to provide a model for a comprehensive, national assessment of the total forest footprint of industrial-scale biomass energy facilities to gauge current and future ecological impacts.