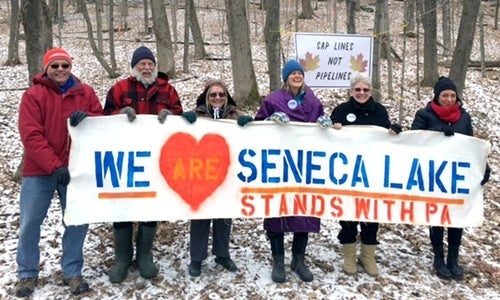 The civil disobedience movement of which I’m a part, We Are Seneca Lake, opposes the transformation of a beautiful upstate New York lakeshore into a giant storage depot for natural gas from out-of-state fracking operations.

To that end, whenever possible, we like to lend a hand to those who are also fighting out-of-state fracking operations, including pipelines.

So on Friday, six Seneca Lake defenders drove across the border to stand with our brothers and sisters in Susquehanna County, Pennsylvania who oppose the seizure, via eminent domain, of the Holleran-Zeffer maple grove and its transformation into a 120-foot-wide right-of-way for the proposed 128-mile-long Constitution Pipeline. 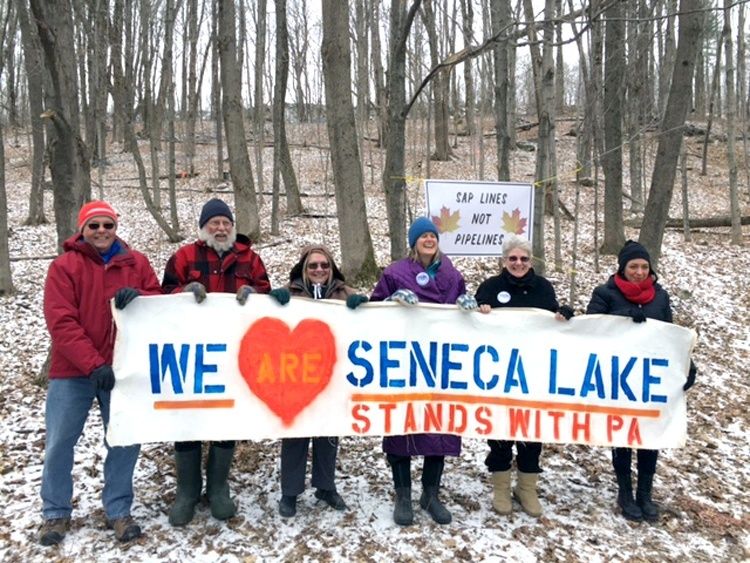 This pilgrimage is one that many others have made before us ever since Jan. 29 when the Federal Energy Regulatory Commission (FERC) issued a partial Notice to Proceed with tree-cutting along the Pennsylvania portion of the pipeline, which will carry natural gas from the fracking fields of northeastern Pennsylvania into Schoharie County, New York—and, from there, throughout New England, Canada and possibly to overseas markets.

After visiting the maple grove, we attended the court hearing where Judge Malachy Mannion of the U.S. District Court in Scranton was ruling on whether the five defendants were guilty of contempt of court for obstructing tree cutting on their property and whether his previous order allowing the tree-cutting to make way for a shale gas pipeline could be challenged in court.

Accompanying us on yesterday’s road trip was our beloved videographer, Bob Nilsson.

Nilsson had a particularly dramatic day. First, en route to the maple farm, while filming a chainsaw-wielding group of tree cutters on a nearby property, he was charged by one of them and nearly punched out. 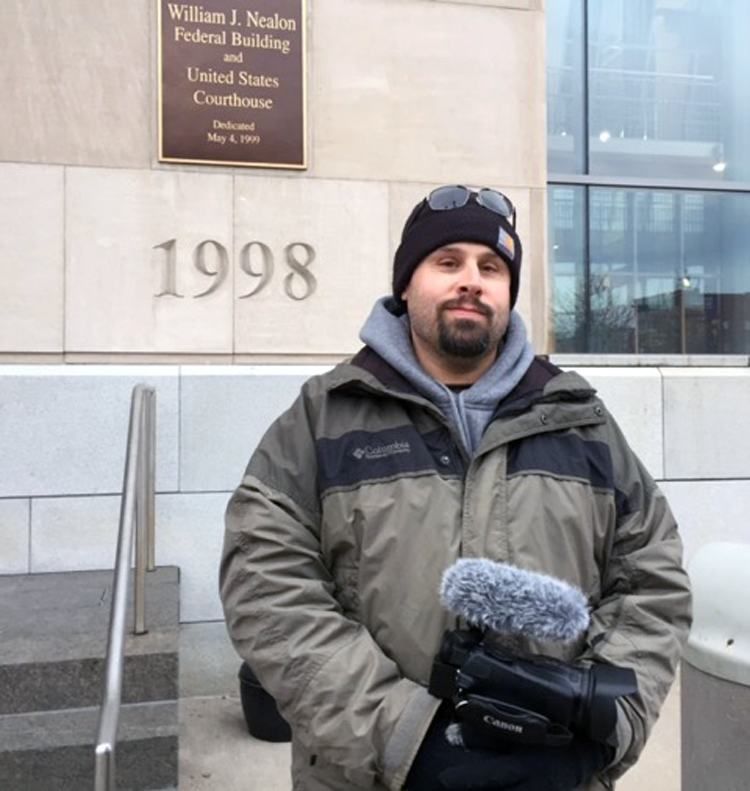 This is Bob Nilsson, videographer for We Are Seneca Lake. Note: his name is Bob. Not “Jeff.” Photo credit: Colleen Boland

Then, later that afternoon, while Nilsson was seated in the back of the courtroom in Scranton, a witness under oath wrongly fingered him as “Jeff,” an individual who was alleged to have participated in obstructing a tree-cutting crew in the Holleran-Zeffer maple grove on Feb. 10.

The witness—retired state trooper Monty Morgan who now works security for the pipeline company—claimed that he recognized the gray sweatshirt and goatee.

From up on his bench, Judge Mannion sized up our videographer’s clothing and facial hair.

“My name is Bob Nilsson.”

But that single case of mistaken identity may ultimately have helped to play a role in the final verdict of that hearing. The lawyer who argued the case for the defense, Mike Ewall of Energy Justice Network, went on to demonstrate that Morgan could identify none of the defendants among those who were said to have prevented workers from cutting trees in recent weeks. (Energy Justice Network is the only staffed organization in northeast Pennsylvania supporting landowners facing eminent domain).

Ruling that the lawyers for pipeline company, Oklahoma-based Williams Partners, had inadequate proof of identity, the judge dismissed the contempt of court citation against the five defendants. The five had stood accused of flaunting the judge’s previous order to allow the tree cutting—which itself upheld the decision of FERC when it denied a stay on cutting the family’s maple trees earlier this month. The pipeline right-of-way requires the destruction of 200 maples on this farm alone—roughly 80 percent of the family’s sugaring trees.

“We consider this a victory because the judge found insufficient proof of contempt,” Ewall told me after the hearing ended. “Constitution Pipeline Company is threatening this family’s livelihood for a pipeline that may never be built. They still don’t have FERC’s permission to construct, yet they bully and intimidate landowners while offering paltry compensation for taking their land.”

Megan Holleran, 29, a family spokeswoman, agreed: “This is the best outcome that we could have hoped for.” She seemed visibly relieved at the ruling, noting that her mother was one of the defendants. “We still have hope that the Constitution pipeline company will wait to cut trees until they have construction permission. We will continue to ask for that.” 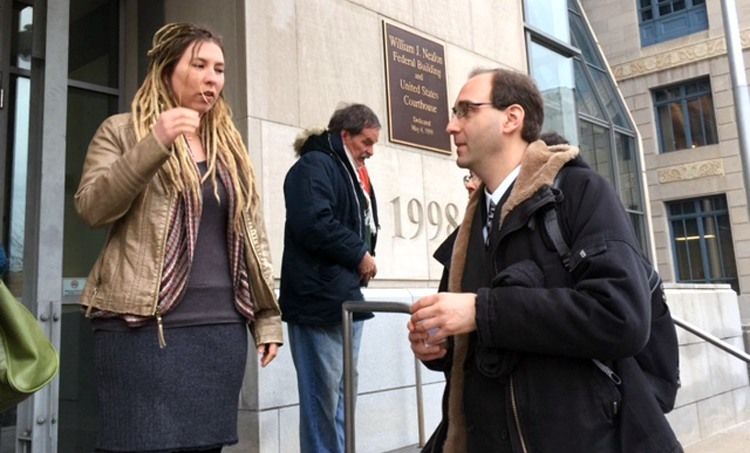 At the U.S. District Court in Scranton, family spokeswoman Megan Holleran speaks with the landowners. attorney, Michael Ewall after the hearing that found insufficient evidence to charge five of her family members with contempt. Photo credit: Colleen Boland

But, for those who support maple sap lines over gas pipelines, the Holleran family’s triumph over the contempt charge was the only good news of the day—and could prove a Pyrrhic victory in the end.

The maple trees themselves were put on the literal chopping block.

Judge Mannion reaffirmed his earlier decision to grant eminent domain status to the pipeline company and made clear in his ruling that, from here on out, he will direct U.S. marshals to “arrest and detain people interfering with tree cutting” and that “violations of this order may result in other penalties,” including the costs of additional security and the costs to the pipeline company for delays.

Further, he warned the landowners that they have “an affirmative duty” to remove people from their land who intend to obstruct the tree cutting—or they themselves will be compelled to pay such costs. 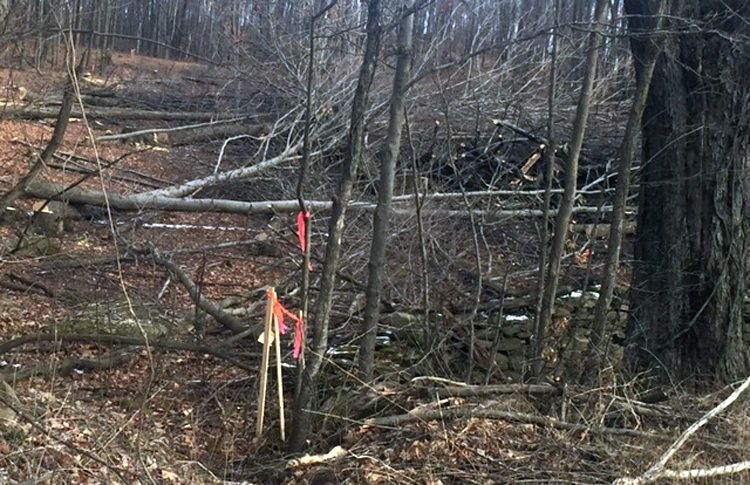 In other words, the property owners cannot stop their trees from falling and have no right to tell the FERC-approved tree cutters to get off their land even if …

As the federal judge in a federal courthouse made clear yesterday, with me and an ill-treated videographer bearing witness, the rule of law dictates that the trees must fall.