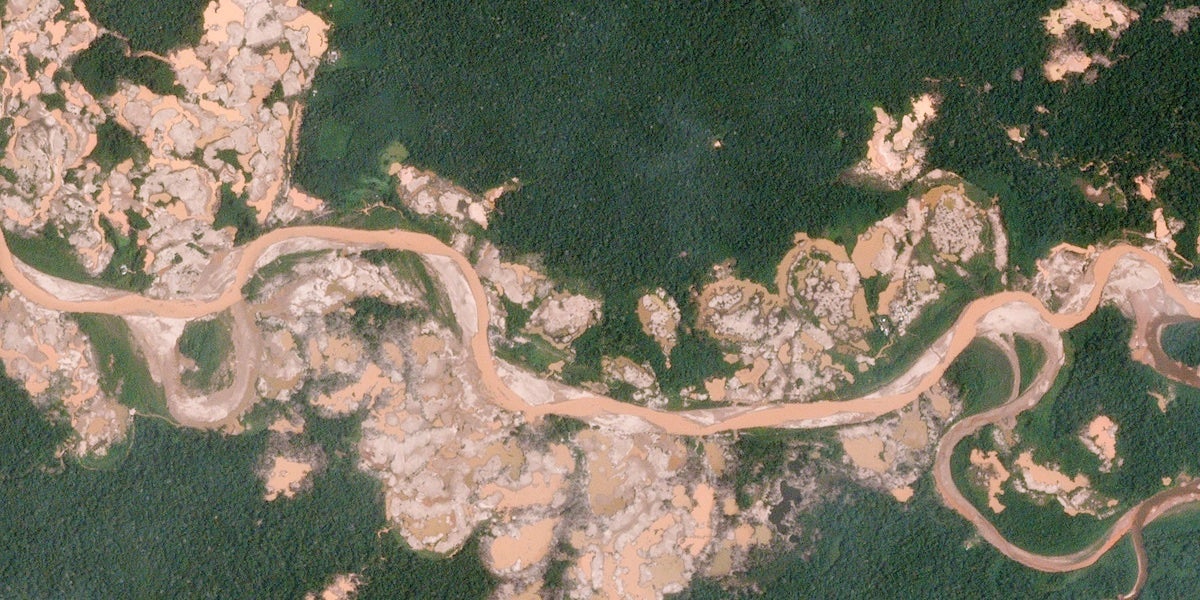 A
first-of-its-kind map has unveiled widespread environmental damage and contamination of the Amazon rainforest caused by the rise illegal mining.

The survey, released Monday by the
Amazon Socio-Environmental Geo-Referenced Information Project (RAISG), identifies at least 2,312 sites and 245 areas of prospecting or extraction of minerals such as gold, diamonds and coltan in six Amazonian countries—Bolivia, Brazil, Colombia, Ecuador, Peru and Venezuela. It also identified 30 rivers affected by mining and related activities.

“The scope of illegal mining in the Amazon, especially in indigenous territories and protected natural areas, has grown exponentially in recent years, with the rise in the price of gold,” said Beto Ricardo, head of the RAISG, in an accompanying
report about the map. The map is a compilation of primary information from RAISG partners, analysis of satellite images and news stories published in the six countries up to 2017.

“The problem is worse than at any other time in history,” Alicia Rolla, one of the coordinators at RAISG, told the
New York Times. “We wanted to give visibility to the enormity of an issue that doesn’t respect borders.”

Of the 245 identified extraction areas, 110 sites were in Peru’s Madre de Dios region—ground zero of the country’s gold rush, and home of the massive and rapidly expanding “La Pampa” illegal gold mine. This formerly lush Amazonian department contained the “most pronounced degradation caused by gold prospecting,” the report said.

Small-scale gold mining operations involves the use of mercury to separate gold from grit. When the toxic metal is released into the soil or bodies of water, it can enter the food chain and lead to health problems for local and indigenous communities, as Reuters noted.

“Illegal mining can kill us,” Agustin Ojeda, an indigenous leader of Venezuela’s Shirian people, said in the RAISG report.

“The mining wells allow for the reproduction of mosquitoes that bring diseases, such as malaria. The effect of mercury on water isn’t taken seriously either. It not only contaminates water but also the fish we eat,” he explained.

According to the RAISG report:

“In Peru, preliminary results from a study by CINCIA reveal that
mercury levels in fish are 43 percent higher in wells abandoned by gold mining than in areas where there is no gold prospecting. Samples of fish were collected in seven lakes in the abandoned mining areas of Maze, Tambopata, Madre de Dios and Inambari. In addition, fish samples were collected in two lakes or riverside lagoons and a river in the Manu National Park, as a control area with no mining activity.”

Nilo D’Avila, campaigns director at Greenpeace Brazil, told the
Guardian that the RAISG map confirmed his own research showing garimpo—or artisanal mining for gold and other minerals in Amazon forests and rivers—is increasing.

One of the affected most affected by mining is Yanomami territory, which extends between Brazil and Venezuela. It contained 55 illegal mining sites in protected areas, the map showed.

The map was released just weeks before Brazil’s president-elect,
Jair Bolsonaro, takes office next month. Environmental groups have raised concerns about what his presidency could mean for the future of the Amazon, as Bolsonaro has promised to open more of the rainforest to development.

“Illegal mining is a serious threat to the Amazon rainforest and the indigenous peoples who call it home,” Moira Birss, spokeswoman for Amazon Watch told Reuters.

“This report provides important new data and clearly demonstrates the scope of the problem, and as such is a call to action to regional governments and the companies that purchase the illegally-mined minerals to take bold, concrete action to stop the destruction.”

#Brazil’s New Environment Minister Is Bad News for the #Amazon and the #Climate https://t.co/CHrUQsAHMD @ClimateCentral @ClimateGroup