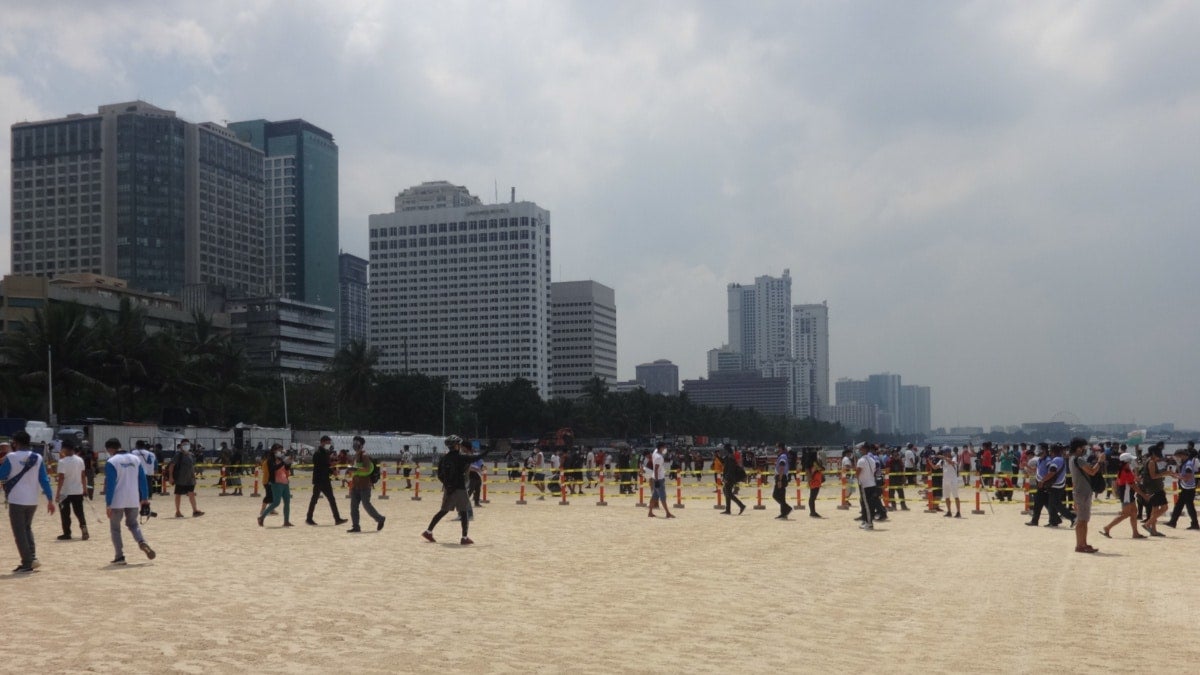 Locals check out the new stretch of artificial beach in Manila Bay, Philippines on Sept, 19, 2020. patrickroque01 / Wikimedia Commons / CC by 4.0

The beach, however, is anything but clean, environmentalists say.

The white sand is actually crushed dolomite sourced from a mine in Cebu, in central Philippines.

Using sand made from dolomite rock in such a project is highly uncommon, experts say. The large majority of sand beaches worldwide are made up of quartz and feldspar, while dolomite sand is commonly used in road construction.

“I have never come across any beach nourishment with dolomite sand,” said Arnaud Vander Velpen, who’s the monitoring and innovation lead in UNEP/GRID-Geneva’s Department on Sand Monitoring and Governance.

While UNEP/GRID-Geneva generally supports finding alternative sources of sand so as not to disrupt ecosystems in rivers and oceans when extracting them, Vander Velpen stressed it was vital to use sand which closely matches the makeup of the native sand to protect beach fauna.

“If you change the core characteristics of the native sand, the original sand, you need to do an environmental impact assessment (EIA) to find out how it’s going to impact the ecosystem and nearby ecosystems,” he told DW.

But according to Torres, such an assessment was not done in Manila.

Beautification Stunt Instead of Proper Cleanup?

Manila Bay’s waters are heavily polluted by oil and trash from nearby residential areas and ports. A huge “No swimming” sign warns visitors to stay away from the ocean.

Philippines’ Department of Environment and Natural Resources (DENR) has denied dolomite sand poses any risk to human health and the ecosystem.

However, scientists of the University of the Philippines have come forward disputing the DENR’s claims. A statement by the Institute of Biology said that using crushed dolomite did not address any of the rehabilitation phases and instead was “even more detrimental to the existing biodiversity as well as the communities in the area,” pointing to the case of water birds. “The dumping of dolomite in Manila Bay has effectively covered part of the intertidal area used by the birds thereby reducing their habitat.”

At peak migration season, Manila Bay is home to 90 aquatic bird species, including species of international conservation concern that are facing a very high extinction risk in the wild.

Authorities should focus on protecting and conserving biodiversity, the Institute of Biology added. “Rehabilitating mangroves is an example of a nature-based solution that is cheaper and more cost-effective than the dolomite dumping project,” the scientists said.

Moreover, the Marine Science Institute has warned that prolonged inhalation of finer dust particles of dolomite could “cause chronic health effects,” leading to discomfort in the chest, shortness of breath and coughing.

They also warned dolomite sand grains would erode during storms and be carried out to sea, essentially being washed away.

Environmentalists say covering up the beach doesn’t address the real issues of the bay. Torres and others believe the best way to clean up Manila Bay is not to add anything, but rather remove trash and pollution.

“There have been studies saying much of the waste comes from already collected waste — so these are open dump sites along the coast that get washed up because of the rain,” Torres said.

She criticized the authorities for continuing to push reclamation projects she says are at odds with each other. These projects will affect large areas of mangrove forests, she said, and experts warn that this, in turn, exacerbates coastal erosion.

“If you’ve removed the areas that helped trap the sand, like mangrove forests, then the likelihood increases that you will have to nourish a beach. Same as building right up to the waterfront,” said Vander Velpen of UNEP/GRID-Geneva.

Plenty of Sand in the Sea?

The question of Manila’s contentious white beach echoes larger questions about sand mining worldwide. Global sand consumption has tripled over the past two decades, UNEP/GRID-Geneva has found. A huge chunk of it is now taken up by construction.

“Many operate on the assumption that natural sand is endless in its supply,” said Vander Velpen.

Sand scarcity is a concern shared by Stefan Schimmels of Forschungszentrum Küste who’s done extensive research on shore nourishment to stop coastal erosion. And as climate change and rising sea levels are threatening coasts, demand for sand will grow even more.

A large study, the Strategies and Tools for Environment-Friendly Shore Nourishments as Climate Change Impact Low-Regret Measures (STENCIL project), focused on the German island of Sylt, a popular vacation spot.

About 1 million cubic meter of sand per year is used to maintain the coastal area of Sylt, STENCIL project head Schimmels said. That’s about 100 million 10-liter buckets of sand.

When sand was extracted off the coast of Sylt, underwater craters were formed. “You can still detect these craters even decades later,” Schimmels told DW.

“Also when you add a couple of meters sand onto the beach — you essentially bury all things that do creep and fly,” he said. “How quickly will they recover?” Schimmels said more research was needed as there was still too little known about long-term effects on the environment.

As for Manila’s artificial white sand, it looks like some might have already been blown away by a recent storm. DENR claims it wasn’t washed away, but said that grayish sand, stones and other material had simply piled up over the dolomite sand. People in Manila have tweeted photos showing how the storm has ravaged the beach.

Authorities have been called tone-deaf for spending around 389 million pesos ( million) on a beach nourishment project in the middle of a raging pandemic.

An image of cake iced with the words “It really hurts – that’s [worth] 389 million pesos?” has since gone viral.

The environmental activist now also worries that she might be labeled a terrorist for speaking out under the Philippines’ controversial new anti-terrorism law. She says she could be arrested for inciting fear when talking about environmental dangers.