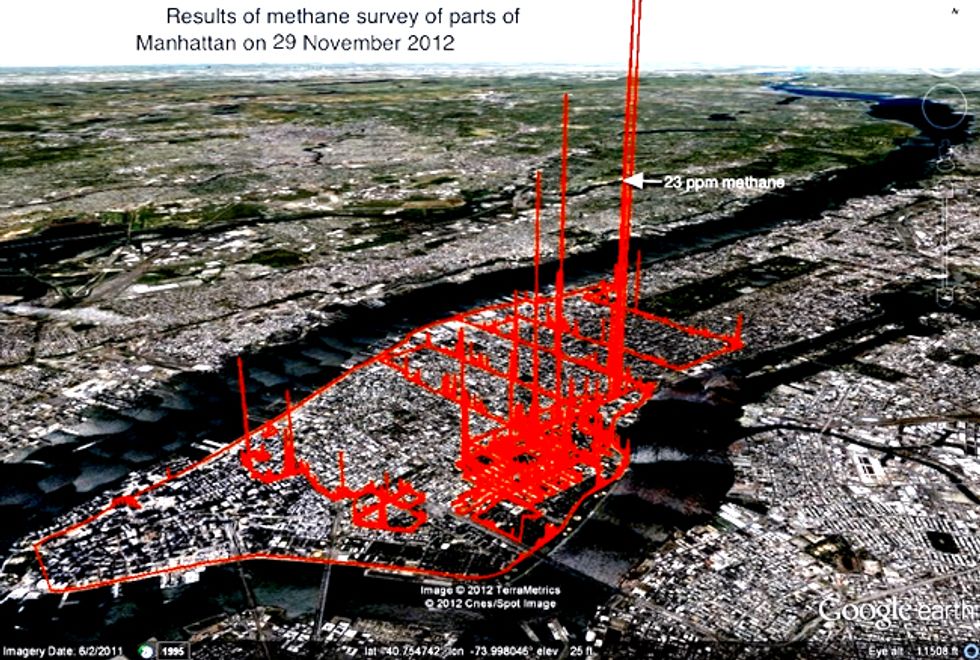 The preliminary report indicates Manhattan sits in a cloud of elevated levels of methane. The extended report reviews existing estimates and estimating procedures of methane emissions by industry, government and other sources (including the Environmental Protection Agency/Gas Research Institute 1996 method). Based on those reviews DCS concludes that those estimates are so inaccurate as to be almost useless—in fact, misleading.

The actual measurements in this report, added to measured production losses and estimated transmission losses, shows a total gas loss above five percent. This number is well above the critical benchmark level of less than 3.2 percent, at which level natural gas no longer retains an advantage over other forms of fossil fuels with regard to climate change. Since natural gas is 93 percent methane, and methane is more than 20 times more potent a Greenhouse Gas (GHG) than CO2, the level of leakage shows natural gas should not be considered a "bridge fuel."

"The methane leakage in the system serving NYC through ConEd is likely already at a level where the methane leaked has as much, or more, climate impact as the remaining approximately 95 percent of the gas that is actually usefully burned by consumers in NYC," said Dr. Bryce Payne, one of the authors of the Gas Safety, Inc. study.

This report takes a simple innovative approach using actual measurements that concludes there is no advantage to natural gas over coal or oil. The authors developed a rapid assessment method based on actual methane measurements and meteorological data that was used to generate an estimate of total methane emissions in Manhattan. This emissions estimate made it possible to assess the relative impact of gas service in Manhattan, most importantly in the broader context of GHG and climate change.

In addition, there are other issues, including the extra cost to consumers of loss of product, damage to trees and other organisms, danger of explosion and toxicity to underground workers, and the public health threat of constantly escaping natural gas evidenced by elevated methane levels. (Remember, natural gas is a mixture of mostly methane, but also varying quantities of BETX, PAH, other VOCs, H2S, CO2 and radioactive radon and radon decay products).

There is an increasing awareness of methane as a potent greenhouse gas and its role in climate change. Because natural gas generates less carbon dioxide when burned, it has been considered a cleaner energy source than other fossil fuels. However, to look at the emission levels from burning alone is to hide natural gas' total greenhouse impact. Since methane leaks into the atmosphere during extraction, transport and delivery to the consumer, what was once assumed to be a small footprint is, in reality, a very significant gas carbon footprint.