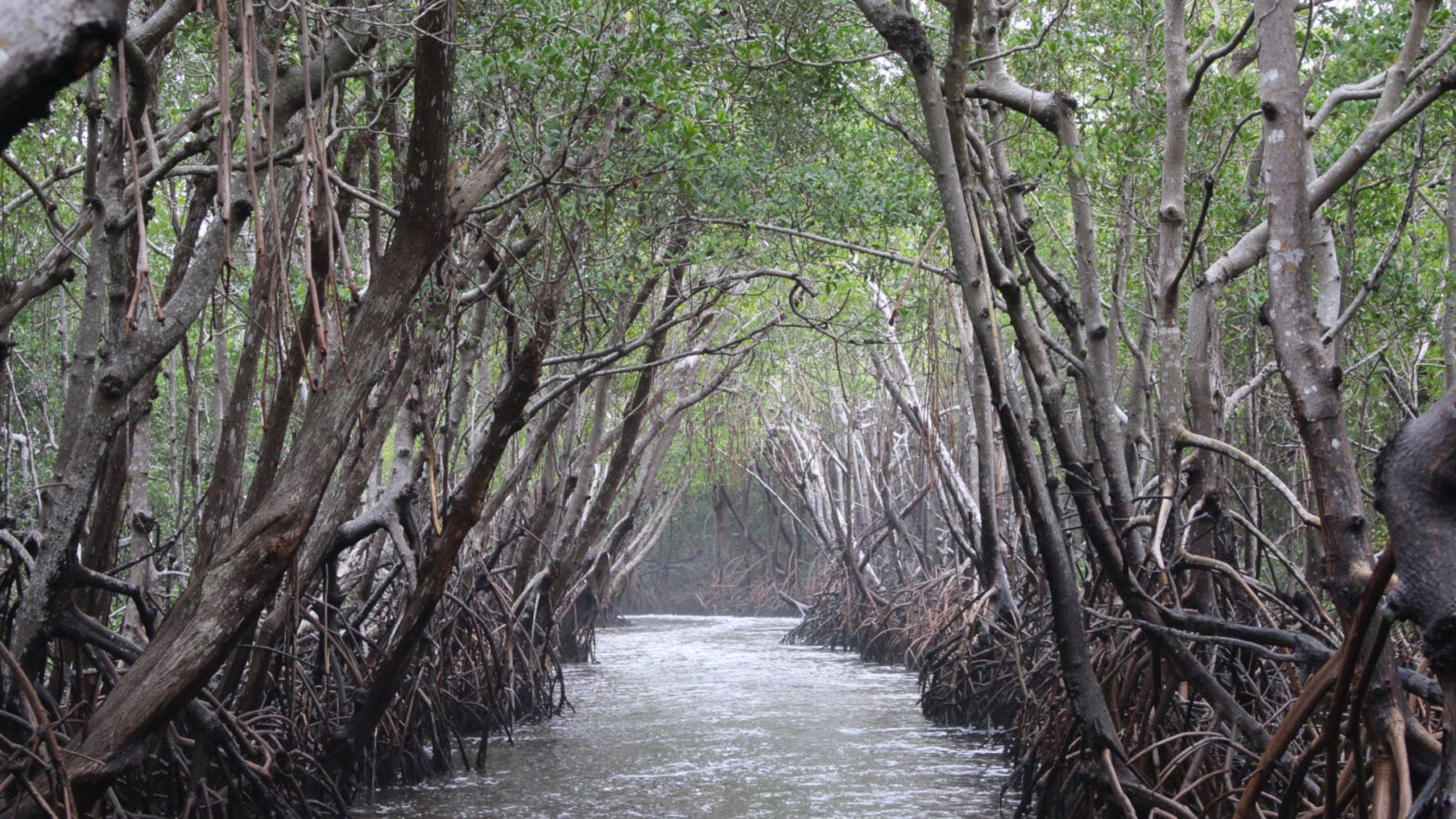 Mangroves in the Everglades. Daniel Hartwig / CC BY 2.0

During a trip to Cuba’s Gardens of the Queen a few years ago, I found myself around small mangrove islands in an area called Boca Grande. Floating on clear, calm water, my travel group and I kicked over tall seagrass beds and rays camouflaged in the sandy flats. Fish of all kinds and sizes hung out among the tree roots, including huge cubera snappers. An hour stretched into two, this enormous saltwater aquarium proving as fascinating as the nearby, healthy coral reefs.

Mangrove forests like this may be one of the world’s most underappreciated landscapes. They provide important habitat for a wide variety of terrestrial, estuarine and marine species — from fish to birds and manatees — and supply nutrients and sediments for seagrass-bed and coral-reef habitats. 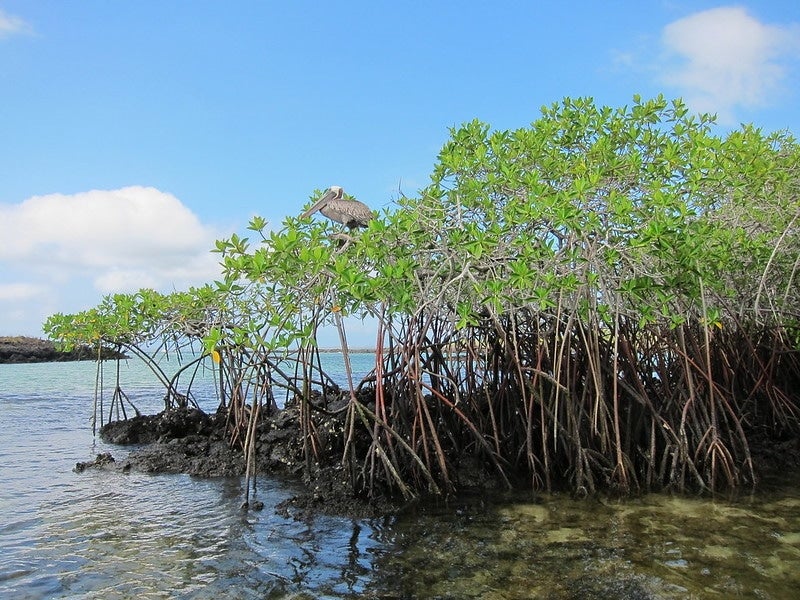 A pelican enjoys a perch in a mangrove stand in the Galapagos. Hans Johnson / CC BY 2.0

These ecosystems also protect the shore. Laura Geselbracht, a marine scientist and coastal restoration expert with The Nature Conservancy Florida, reports that mangroves prevented an additional .5 billion in direct damages in that state from 2017’s Hurricane Irma. An analysis by The Nature Conservancy, University of California Santa Cruz and Risk Management Solutions found that just 100 yards of mangrove trees can reduce wave height by 66%.

And mangrove forests also help mitigate climate change, pulling massive amounts of greenhouse gases from the atmosphere and storing them in their soils — up to four times as much carbon as other tropical forests. A 2018 study calculated that the world’s mangrove forests suck up more than 6 billion tons of carbon a year.

That’s the good news. The bad news: Mangroves face numerous threats — 35% were lost between 1980 and 2000, and since the turn of the 21st century almost 1 in 50 of the remaining mangrove forests has been cut down.

Today, one of the direst threats to their continued existence comes from rising sea levels caused by climate change.

A paper published in Science in June looked at data on thousands of years of sea-level rise and mangrove accretion. (Accretion is the opposite of coastal erosion: Instead of wearing away, soil builds up around the roots and lifts trees vertically, keeping them above water.) While a mangrove’s lower trunk and roots live underwater, its upper trunk and leaves live above the waterline. And when the water gets too high, and the accretion process fails to support mangroves, the trees effectively drown. 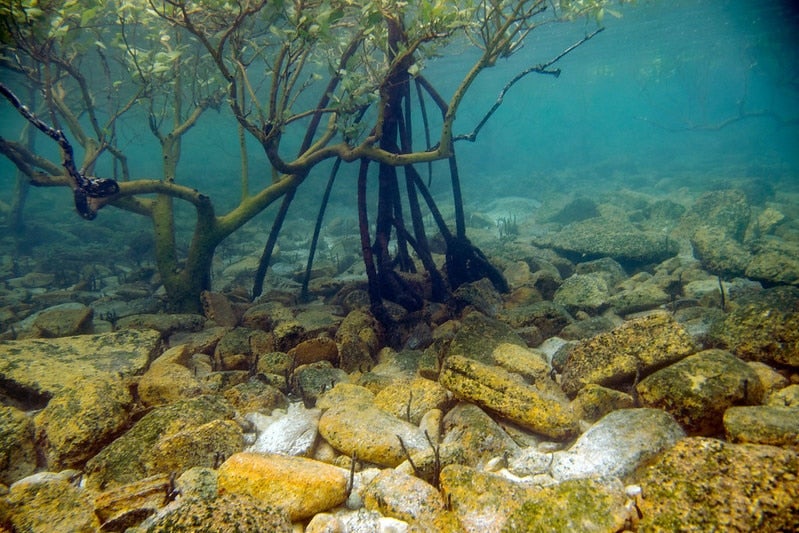 The authors determined that accretion will not keep up beyond sea-level rise of 0.27 inches per year. Rutgers University climate data scientist Erica Ashe, one of the authors, says the current global rate is 0.134 inches, with some areas experiencing much higher rates. In Louisiana, for example, the effect of rising water is compounded by land sinking due to water removal and sediment compaction.

Based on projected rates, mangrove trees could lose their race against rising water within the next 30 years.

“The rate of sea-level rise keeps going up,” says Geselbracht, who was not affiliated with the study. “Every time a study looks at it, the rate is faster than we expected.”

Mangroves could, in theory, adjust to rising seas by migrating landward, but that’s not possible in much of the world because of human development. The trees cannot grow on roads or buildings.

“We need to modify infrastructure, change permitting rules, and come up with other innovative solutions to accommodate that movement,” Geselbracht says.

Recent research supports this. A study on Mexico’s Yucatan Peninsula, published this past April, showed that the mangrove areas most affected by human activity there were also the ones least able to adapt to sea-level rise. In other words, just leaving mangroves alone could help.

But the world isn’t leaving mangroves alone: We continue to actively destroy their forests at an increasing rate, clearing them for development and aquaculture, timber and fuel.

Colombia, which has approximately 1,467 square miles of mangrove forests on its coasts, is experiencing the highest annual rate of loss in South America — roughly 154 square miles in the past three decades. Primary blame goes to human activities, including logging and development, primarily for tourism. 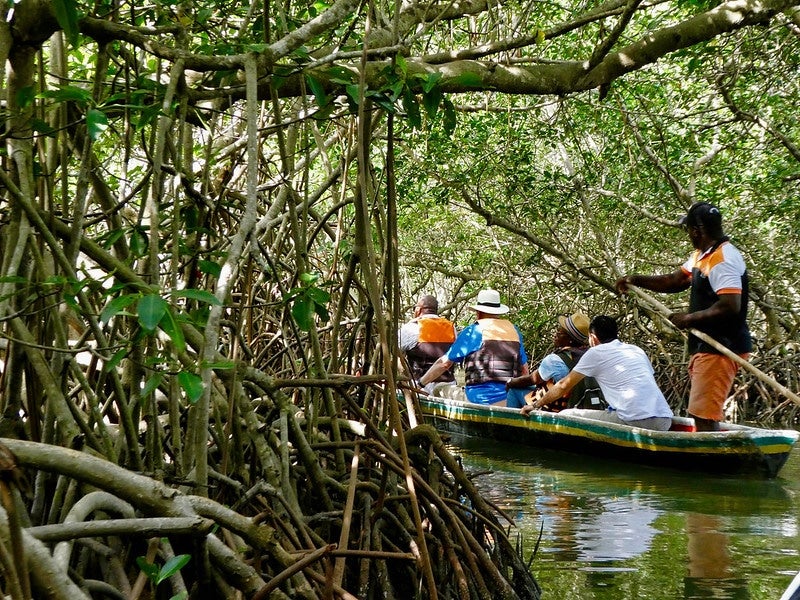 One of the most striking developing threats is in the Sundarbans region of Bangladesh and India, where the biggest mangrove forest on Earth — covering an area of more than 3,860 square miles — houses at least 505 species of wildlife, including 355 species of birds, 49 mammals and 291 fish. It provides critical habitat for Bengal tigers.

Sharif A. Mukul, a research fellow at the University of the Sunshine Coast in Queensland, Australia, warned in a recent letter to Science that construction of a 3.8-mile-long bridge, the largest development project in Bangladesh, could destroy the Sundarbans.

“People anticipate much more tourism and industry activity with the bridge,” he says. “The second to largest seaport [in Bangladesh] is close to Sundarbans. After completion of the bridge, the port likely will be used more frequently, with more factories and that sort of thing.” 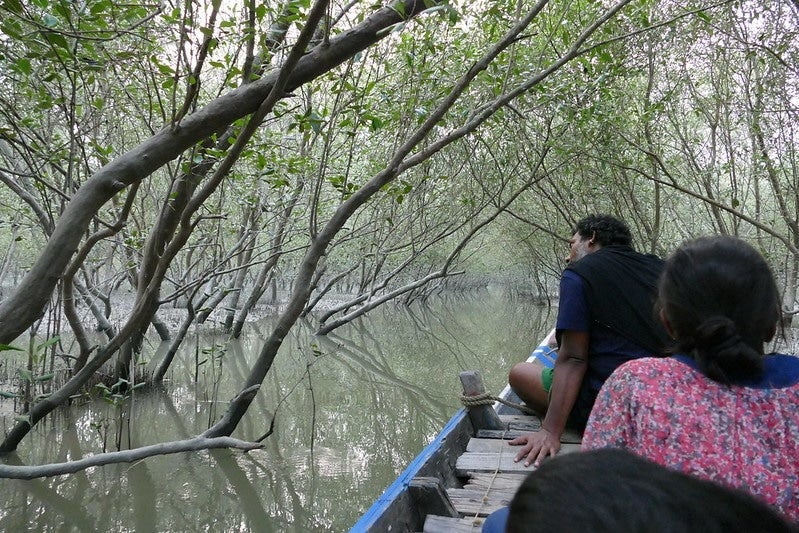 A birding safari in the Sunderbans. Ankur Panchbudhe / CC BY 2.0

The Sundarbans are particularly important for protection from cyclones, Mukul adds, which have increased in number and intensity in the past few years. Fifteen percent of tropical cyclones form in this region. The country’s annual monsoon season has also worsened, including catastrophic floods this summer.

The bridge will bring economic benefits to the region and Mukul does not argue against its construction, but rather for doing it in a way that protects local ecosystems and their services. “The government is definitely focusing only on development and not the environment,” he says. “They should do the project in a more environmentally friendly way.”

The country has company in that regard. The UNESCO Mangrove Biosphere Reserve near Ho Chi Minh City in Vietnam contains one of the world’s largest rehabilitated mangrove forests. That country recently approved a .3 billion tourist development to be built largely on filled-in coastal land within the reserve’s buffer zone. This project also includes a massive bridge. 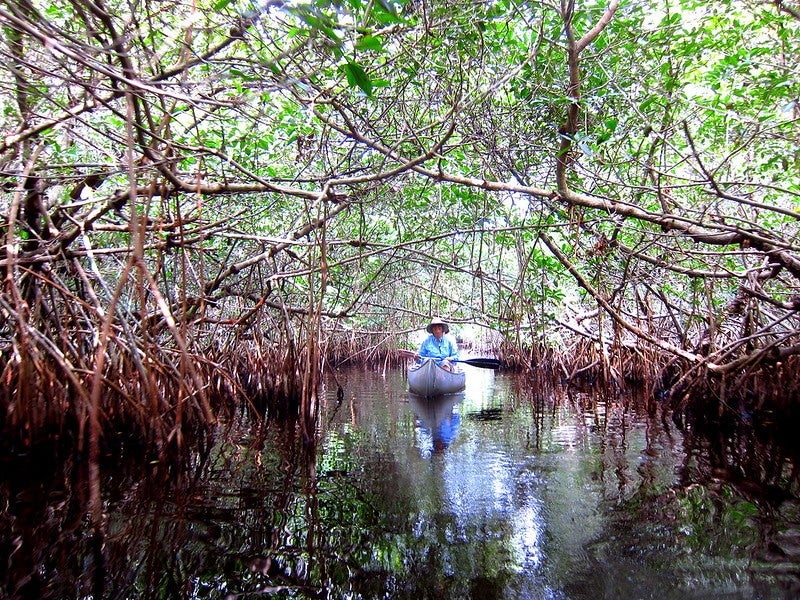 And in the United States, Geselbracht says, Florida continues to lose swaths of mangroves to physical removal.

“People on the coast don’t want mangroves blocking their view,” she says. The state now has laws regulating removal of mangroves, which has slowed their loss. But certain types of removals remain legal, Geselbracht says, including some for storm-retention ponds. “It astounds me that no one does a cost-benefit analysis to show that removing them increases rather than decreases pollution and damages.”

In a particularly vicious twist, taking out mangroves not only eliminates their potential for storing carbon, it releases significant amounts — increasing the threats of climate change and sea-level rise and putting even more mangroves, and the communities and habitats around them, at risk. Between 2000 and 2015 mangrove destruction released up to 122 million tons of carbon — more than two and a half times the amount emitted by California wildfires between 2001 and 2010. Indonesia, Malaysia and Myanmar accounted for more than two-thirds of the released amount.