The Emancipation of Manny-T, the Emaciated Manatee 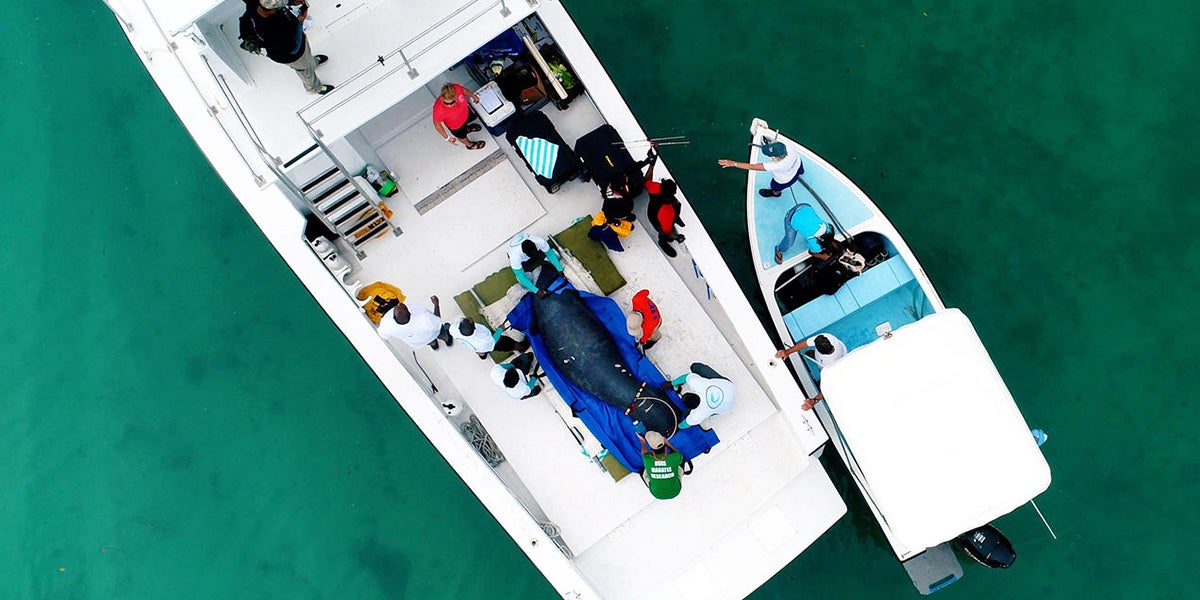 Scientists can identify individual humpback whales by the shape and coloring of their flukes, giant river otters by the white markings under their chins and spotted eagle rays by their freckles.

Would you like to know the best way to ID a particular manatee? Look at its scars.

Manatees can live more than 40 years in the wild, and by the time they reach adulthood, most have acquired a slash or two—or a dozen—from uncomfortably close encounters with propeller blades and ship’s hulls.

Imagine that: Evolving over the course of 60 million years, ditching your hind legs in the process, and then being reduced to a target scored with human-inflicted wounds, thanks to another species deciding that speedboats are fun. 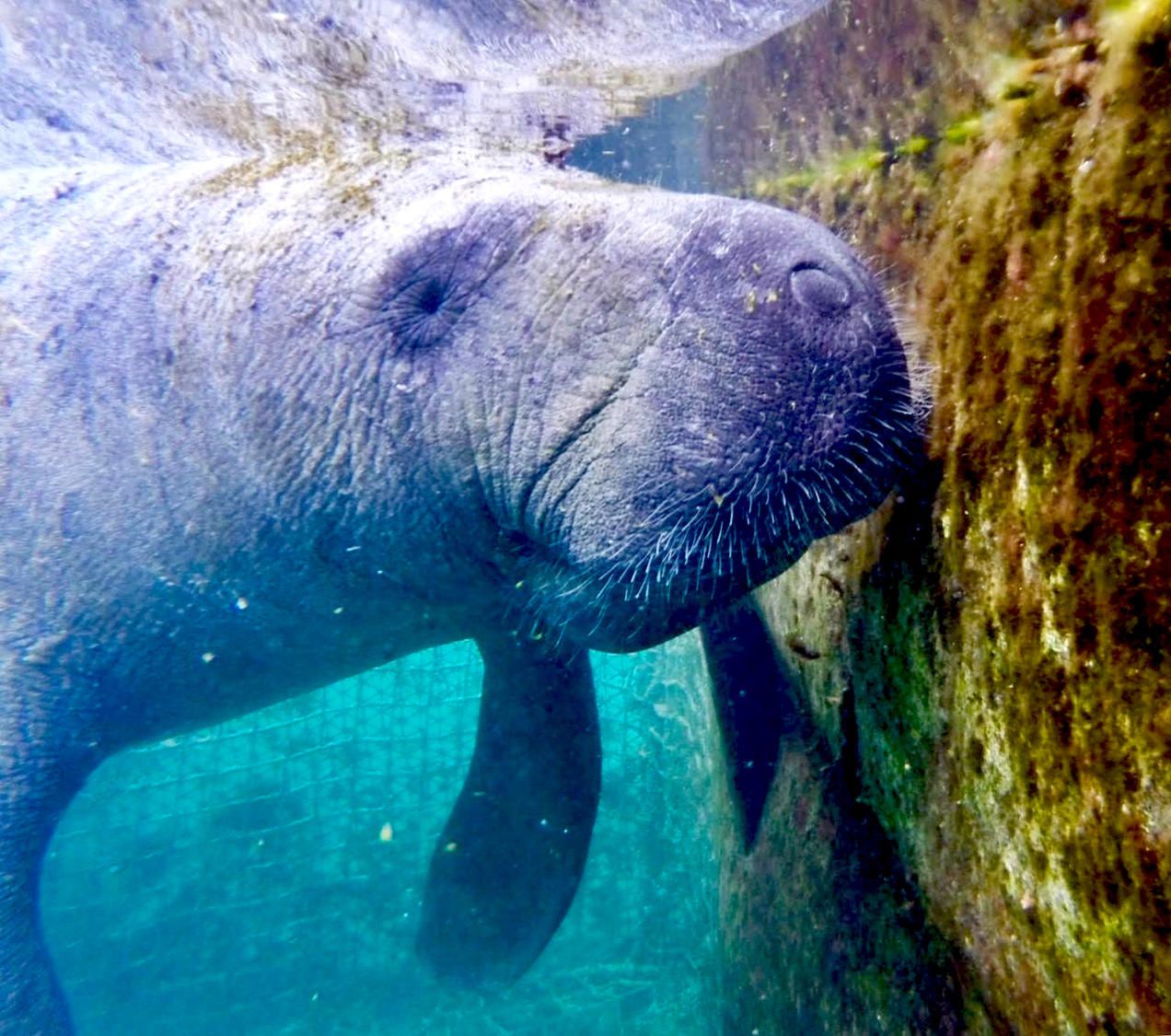 While horrifying to look at, the distinctive pattern of boat-strike scars that a manatee has on its body does help scientists estimate population sizes and keep tabs on the animals’ habitats. By counting the number of scars, for instance, researchers can determine whether a manatee has lived in areas with heavy boat traffic.

Only 6,500 or so manatees remain in Florida, and the species is officially considered threatened under the Endangered Species Act. (Manatees were considered endangered until March of 2017, when the U.S. Fish And Wildlife Service declared that the population had recovered enough to be bumped up a notch. Not everyone agrees with this decision, however.)

When an emaciated manatee showed up in the Bahamas community of Spanish Wells last September, scientists immediately set to work trying to save it. Around two dozen manatees have made their way over to the islands from the mainland over the course of the past few decades, but this one was a startling sight.

“He looked like roadkill that just happened to still be living,” said Ted Turner, vice president of Dolphin Cay Operations at the Atlantis resort on nearby Paradise Island. “I’ve never seen an animal this emaciated that survived.”

There’s no sure way of knowing how the animal wound up in the Bahamas, but Turner and his colleagues suspect Hurricane Irma had something to do with it, since the storm had blown through the Caribbean just 10 days prior to the manatee’s arrival.

Manatees are known for their chubby figures, but this one—nicknamed Manny-T—was skin and bones. The animals eat a limited variety of vegetation that grows along the coasts and inlets of Florida, and those plants don’t grow out in the open ocean. After traveling more than 200 miles at sea, Manny-T was near death.

Because Atlantis is equipped to care for marine mammals, Turner and his crew were perfectly suited to step in and help. They immediately brought Manny-T, estimated to be eight or nine years old, back to Atlantis to begin treatment. Using the scars all over his body as clues, Turner and his team were able to compare notes with other researchers and determine that he originally hailed from Tampa Bay, Florida—some 400 nautical miles away.

If healthy, an animal of his length and age would weigh somewhere in the neighborhood of 840 pounds. But the animal before them was a ghost of his former self, weighing just 365. Manny-T couldn’t even bring himself to eat the food the scientists offered him.

Blood tests revealed that the manatee was hypoglycemic and on the verge of metabolic collapse, said Mike Walsh, a professor of veterinary medicine at the University of Florida who helped in Manny-T’s recovery. Believe it or not, Walsh said that before the manatee could resume eating, he first needed to poop.

During his time at sea, the manatee likely ate whatever he came across—his bowels were compacted with hard, woody material. So the crew set to work administering coconut oil enemas several times a day. At the same time, they pumped glucose and other nutrients into the manatee’s stomach through a feeding tube.

Fortunately for Manny-T, the regimen worked. In just a few days, he was able to start eating again. Soon Turner and his crew were feeding him 144 heads of romaine lettuce, 24 heads of kale and 4 bags of spinach every day. Over Christmas, Manny-T even ate the resort island out of kale entirely.

After a few months of recovery at Atlantis, Manny-T was back to his bulbous, 840-pound self. Turner and his crew released him into the waters of the Bahamas on Jan. 9. Thanks to satellite telemetry and a monitoring device looped around the manatee’s tail, scientists are now tracing Manny-T’s explorations of his new habitat. He’s been checking out the coastline at a rate of about 8.5 miles a day.

What’s more, photos taken by locals reveal that Manny-T may even have a girlfriend—an older female named Gina who has been plying these waters since 2014. “He’s had about the best reintroduction into the wild I could imagine for an animal,” said Turner.

Of course, Manny-T and his kind still face many threats, from boats to toxic algae blooms to cold snaps. The day I spoke with Walsh, he was on his way to recover a dead manatee that couldn’t survive Florida’s recent winter temperature plunge. Around 10 to 15 manatees die from cold each year, said Walsh. But some years are worse than others. In 2010, for instance, as many as 250 to 300 manatees may have perished from the cold.

This is one reason why saving a single animal like Manny-T is important. Conservation is a numbers game, after all. “You can’t predict when that’s going to happen again,” Walsh said, referring to the 2010 cold, “and that’s why there was some concern about delisting the species last year.” Manatees can respond to some challenges, he added, but too many setbacks for too many years in a row can upend the balancing act.

Fortunately, the story of Manny-T is far from over. Now that he’s healthy and seems to be staying put in the Bahamas, he will continue to provide invaluable data about how these animals are able to adapt to new habitats.

“Good care for animals is similar to good care for us. It’s a time-consuming and expensive relationship,” said Walsh. “But the payoff for what we’re going to learn from Manny-T is going to be amazing.”