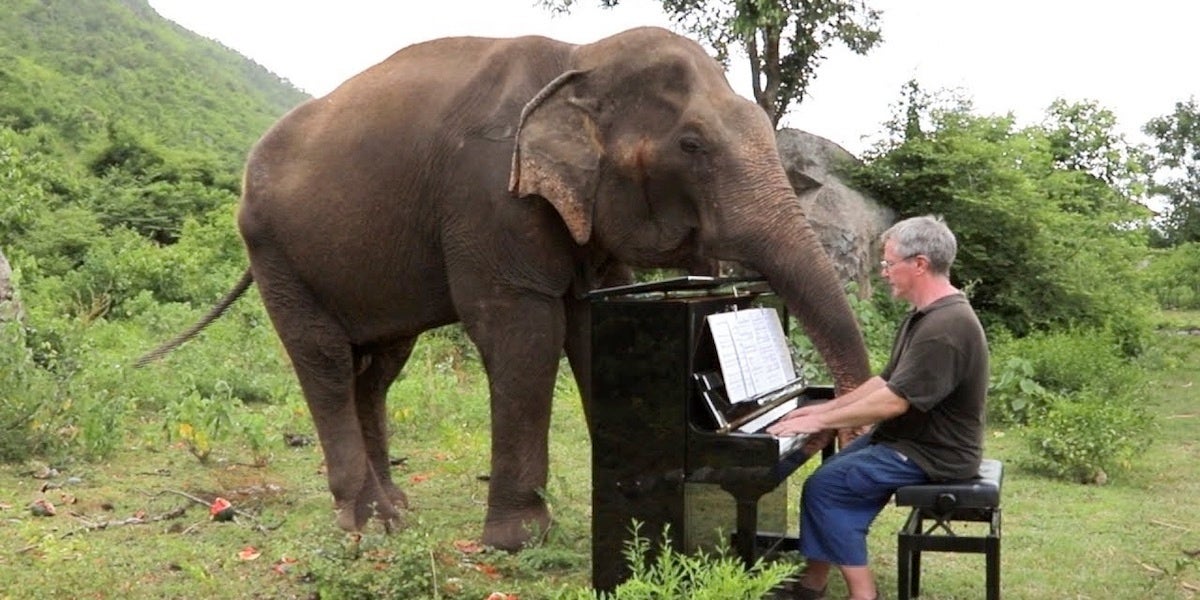 Update, Nov. 7: Following the publication of this post, EcoWatch received feedback from PETA and readers stating that Elephants World is not a sanctuary because its treatment of elephants includes the use of bullhooks and visitors sitting on the elephants’ backs. We contacted Elephants World and a representative said that their mahouts use bullhooks to prevent stronger elephants from attacking weaker elephants or visitors. “For emergencies like this our mahouts still carry the bull hooks. For the safety of the elephants as well as the visitors,” the representative said. They also said that they do not allow visitors to sit on the animals. “This was something we did many years ago, and have stopped doing since we don’t feel it’s completely animal friendly,” the representative said.

Meet
Lam Duan, a blind elephant who lives at Elephants World, a sanctuary in Kanchanaburi, Thailand. Her name translates to “tree with yellow flowers,” she loves corn and jackfruit and she’s got an ear for classical music.

In fact, Lam Duan and her fellow pachyderms often get to enjoy the musical stylings of Yorkshire-born pianist
Paul Barton, who is now based in Bangkok, according to his Facebook page.

Many of the elephants at the sanctuary are aging, or have disabilities or injuries after working in the logging industry.

Barton got the idea of playing piano for the gentle giants after he and his wife came across the elephant sanctuary online.

“We liked the sound of the place being a retirement center for old, injured and handicapped former logging and trekking elephants,” he explained in video, as quoted by CBS News. “So we paid them a visit. I wondered if these old rescue elephants might like to listen to some slow classical music.”

The elephant sanctuary, which is home to more than 30 domestic elephants, agreed to let him bring a piano to the site.

Barton said the first time he played piano for the animals, a blind and ailing elephant stopped eating his breakfast when he heard Beethoven, according to CBS.

“[He] was often in pain,” the pianist said of the elephant in a video. “I like to think maybe the soothing the music gave him some comfort in the darkness.” The elephant eventually died of an infection, which Barton was “heartbroken” over.

The elephants really appear to respond to the soothing melodies of Bach, Chopin, Ravel, Debussy and more. They flap their ears, they edge closer to the piano, and one adorable youngster even tried to clink out a few notes with its trunk.