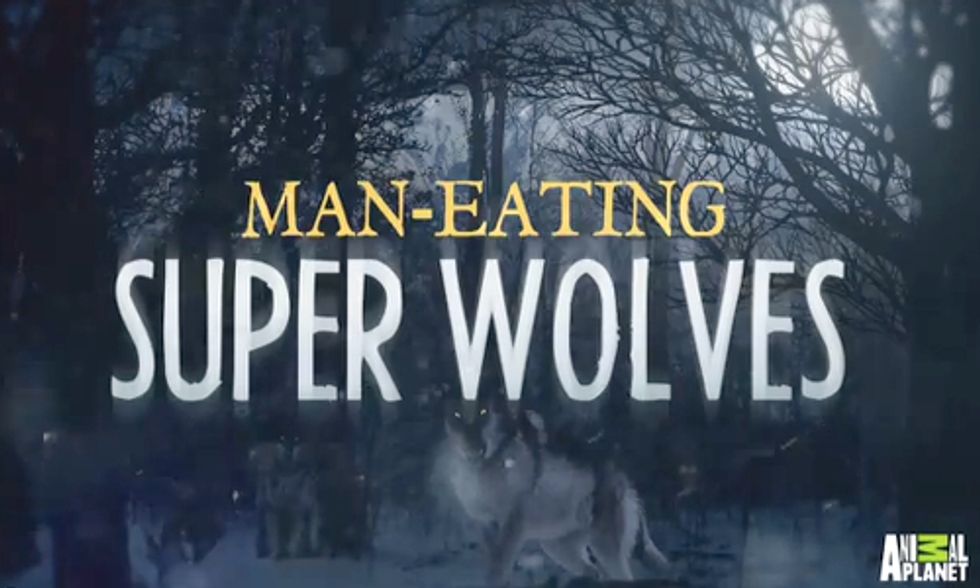 Wolves have been facing a barrage of undue negative publicity lately, from being stripped of federal protection to being prized in glorified wolf-hunting derbies to being victims of state bills that fund their widespread killing under the guise of "management."

In the latest affront to these creatures, Animal Planet featured a segment called "Man-Eating Super Wolves" during their Monster Week line up, prompting sharp public criticism. Defenders of Wildlife and other concerned citizens called on the television station to immediately remove the program from the air.

“There are real-world consequences to airing a fictitious portrayal of wolves based on sensationalism instead of on science,” said Defenders of Wildlife President and CEO Jamie Rappaport Clark in a statement. “Demonizing wolves does serious harm to these imperiled animals and erodes public support for their continued recovery.”

Animal Planet claims that the show was always intended to air only once, and miraculously, all subsequently scheduled air times have been removed from their schedule. But this ratings-grab was attempted at the expense of an important keystone species. Yesterday, an article appeared on their website, Ten Reasons to Love the Wolves, which seemed a transparent attempt to restore a tarnished image. It did not fool many readers, as evident in the comments section of the article. Commenter Elizabeth Huntley wrote:

The very bad damage to wolves has been done, Animal Planet, by your airing of that horrible, distorted and irresponsible program you aired called "Monster Super Wolves." Where is the PUBLIC APOLOGY AND RETRACTION of that trash you aired?

Terrible as they were, these two deaths do not constitute a trend that would suggest wolves are becoming more threatening toward humans. In an attempt to bolster their argument, Michael Hoff, the producer, and his team include several cases in which wolf hybrids apparently killed their caretakers, but in each case the circumstances are murky. In fact, given the way a growing number of wolves have begun to live among people without attacking them, the opposite point could be argued. Humans kill far more wolves than are killed by them—for no reason other than fear.

Animal Planet knowingly presented as fact, anti-wolf myths and inaccuracies that wiped out gray wolves nearly a century ago, despite irrefutable scientific evidence to the contrary, says Defenders of Wildlife. For a network that prides itself on educational content and conservation-minded subject matter, the irresponsible misrepresentation of a still-recovering species could not be more inappropriate.

“We’re glad to see that Animal Planet dropped this show from its schedule and are proud that our members spoke out so forcefully on this important topic,” said Rappaport Clark.

Below is the sensationalized trailer for the now removed "Man-Eating Super Wolves":

Contrary to the demonized imagery perpetuated by some, the video below from Sustainable Man shows the beneficial influence wolves had on Yellowstone National Park when they were re-introduced in 1995 after a 70-year absence. The trophic cascade—an ecological process which starts at the top of the food chain and trickles down to the bottom—caused by the reintroduction of the wolves, brought new life to the park and changed geography.

Americans Speak Out Against Stripping Federal Protections From Wolves