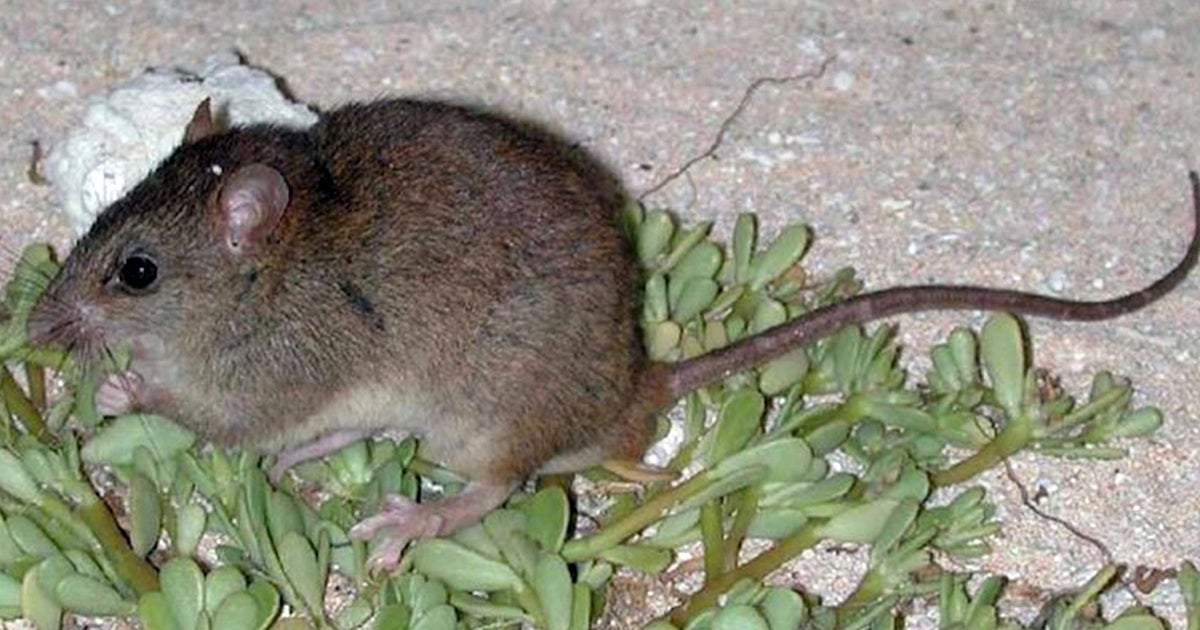 The Bramble Cay melomys. State of Queensland / CC BY 3.0 AU

A small Australian rat that lived on a 12 acre island in the Great Barrier Reef has become the first mammal to go extinct primarily because of human-caused climate change, the Australian Government confirmed Monday.

The Bramble Cay melomys was first declared extinct after a 2014 search on Bramble Cay, its native island in the Torres Strait, between Queensland, Australia and Papua New Guinea, according to a 2016 report by the University of Queensland and the Queensland government.

“The key factor responsible for the extirpation of this population was almost certainly ocean inundation of the low-lying cay, very likely on multiple occasions, during the last decade, causing dramatic habitat loss and perhaps also direct mortality of individuals,” the report authors concluded. “Available information about sea-level rise and the increased frequency and intensity of weather events producing extreme high water levels and damaging storm surges in the Torres Strait region over this period point to human-induced climate change being the root cause of the loss of the Bramble Cay melomys.”

Charles Darwin University professor John Woinarski, who has worked on the species, told the program Hack on Australia’s ABC News that a 2008 recovery plan drafted for the species was never implemented.

“It’s been known for a couple of decades it was in a pretty precarious position,” he told Hack. “It suffered from living a long way away from anywhere else, and being a rat and being not particularly attractive. It didn’t have much public advocacy for it.”

Researchers believe there were several hundreds of the species on the island in the 1970s, but its numbers had fallen enough by the 1990s that it was listed as endangered, CNN reported.

An attempt to save the species with a captive breeding program took place too late. When researchers went to search for the melomys in 2015, they could not find a single rat left, according to Hack.

It’s not a big, iconic or ‘sexy’ species and it won’t get much coverage in the media but this is important. The Bramble Cay melomys is now extinct … the first mammal to be declared extinct due to human-caused climate change. Don’t let this go unnoticed.https://t.co/9XppUNWe8A pic.twitter.com/5hpN5nbv4F

“Bramble Cay melomys’ extinction is an absolute tragedy,” she said, according to CNN. “Labor and Liberal’s addiction to coal is the death warrant for many of our other threatened animals.”

If global greenhouse emissions are not reduced and global temperatures continue to increase, almost eight percent of species could go extinct, according to a 2015 University of Connecticut study. Australia, along with New Zealand and South America, is most at risk for losing its biodiversity due to climate change.

In the same press release that confirmed the melomys’ extinction, Australia’s Minister for the Environment Melissa Price also announced that the spectacled flying fox would now be listed as an endangered species, up from vulnerable, after a 2018 heat wave in Queensland cut its numbers by one third, according to The Guardian.

This is devastating but unfortunately not surprising .The spectacular flying fox is now endangered after a third of its population was wiped out in Queensland’s recent heatwave.#bats https://t.co/NkbnGTYIhn

“The uplisting of the Spectacled Flying-fox reflects the Government’s heightened concern for its future, given that the population has halved in the past decade, and was heavily impacted by a recent heat stress event in north Queensland,” Price wrote.