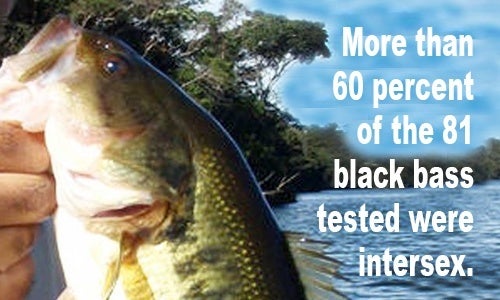 Male black bass and some sunfish in North Carolina rivers and streams are developing eggs in their testes, which can cause reproductive problems and potentially threaten populations, according to unpublished research. 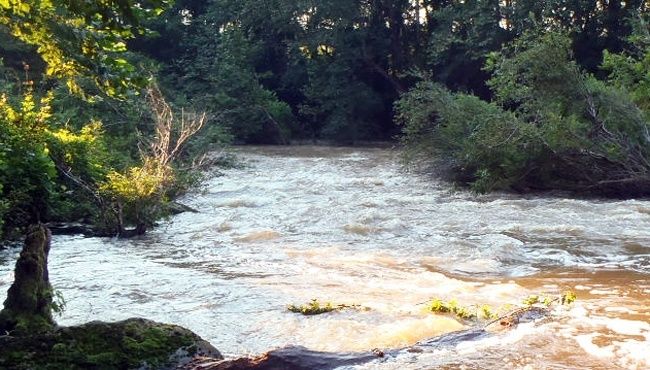 The research adds to growing evidence that exposure to estrogen compounds is feminizing male fish across the U.S. and suggests that North Carolina fish might be particularly at risk.

“It’s a very interesting study and certainly adds to our understanding of what’s potentially going on in our rivers and with the intersex fish,” said Vicki Blazer, a U.S. Geological Survey fish biologist who was not involved in the study.

North Carolina State University researchers tested 20 streams and rivers throughout North Carolina during the 2012 spawning season for contaminants known to disrupt endocrine systems, such as industrial chemicals and pesticides. They also tested black bass—largemouth and smallmouth bass—and sunfish in the rivers for “intersex” characteristics, looking for eggs in the testes of males.

More than 60 percent of the 81 black bass tested were intersex, while 10 percent of the 185 sunfish were intersex. They detected 43 percent of the 135 contaminants they were looking for throughout the state. Crystal Lee Pow, a Ph.D. student at North Carolina State University who helped lead the work, said they are still analyzing differences between waterways so aren’t yet disclosing the impacted rivers.

The results are worrisome. In past studies, male fish with eggs have had reduced fertility and sperm production. In addition, male fish are critical for the survival of developing black bass and sunfish.

“Males guard the nest, create spawning nests for young and guard fertilized eggs,” Lee Pow said. “ Males are crucial for hatching success and their male behavior could be altered by exposure to contaminants and the presence of the intersex condition.”

The research was in part spurred by a U.S. Geological Survey study in 2009 that showed intersex male fish in nine U.S. river basins and found that the Pee Dee River basin—which spans North Carolina and South Carolina—had the highest rate of intersex fish (80 percent).

The suspected culprits of the sex changes are endocrine disrupting compounds. This includes hormones, industrial chemicals and pesticides that are or mimic estrogen hormones. These compounds enter rivers and streams via permitted effluents, stormwater and agricultural runoff and wastewater treatment plants, where excreted birth control and natural estrogens pass through relatively un-altered.

“There are also a lot of concentrated animal feeding operations in North Carolina,” Lee Pow said, adding that previous research at North Carolina State found that waste from pigs, which is held in lagoons, can run off into streams after it is applied to land. “The [pig] waste is chock-full of estrogens,” she said.

It’s unclear why the black bass had such a higher intersex rate, but it’s an important finding that shows not all species are impacted the same, said Dana Kolpin, a U.S. Geological Survey research hydrologist.