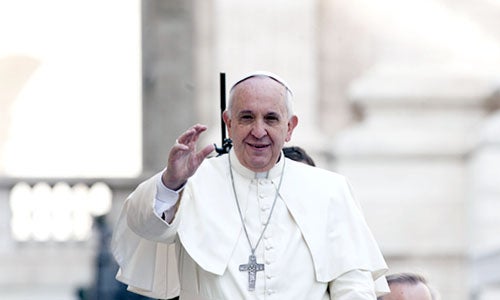 Today marks the day of fast for Catholics in the U.S. as part of the “Lenten Fast for Climate Justice,” a global campaign launched by the Global Catholic Climate Movement in partnership with Fast for Climate Change, Green Anglican Carbon Fast and others to encourage Pope Francis and the 1.2 billion Catholics around the world to take meaningful action in addressing climate change. 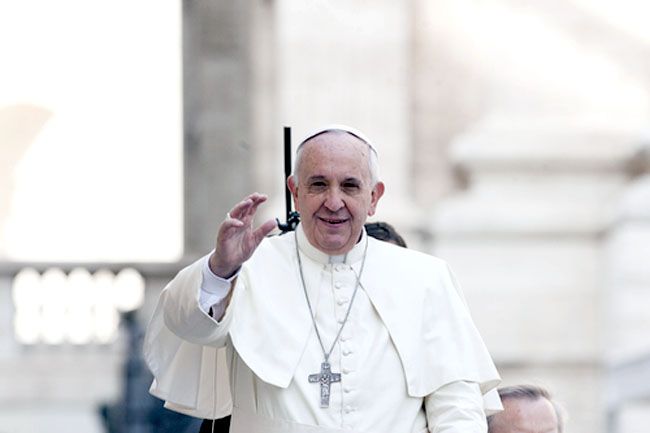 The Lenten fast is partially in response to Pope Francis’s call to action on climate change.

During this Lenten season, Catholics from more than 50 countries have signed up to fast for one day during the 40 days of Lent and today is the U.S.’s designated day. The goal of the fast is to “raise awareness on climate change” and to challenge Catholics to confront what Pope Francis has called “a globalization of indifference,” according to the National Catholic Reporter.

But are that many U.S. Catholics concerned about climate change? There’s now data that says yes, according to a special analysis conducted by the Yale Project on Climate Change Communication. Overall, the organization found that Catholics, who make up 24 percent of all American adults, “are more convinced that global warming is happening, are more worried, and are more supportive of policy action than other Christians.” 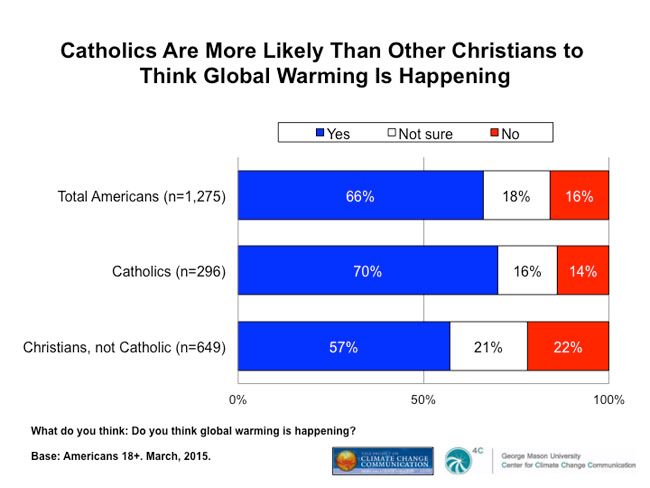 Not only do they believe climate change is happening, but they are also more likely to be concerned about its impacts. “A majority of Catholics (64 percent) say they are very or somewhat worried about global warming—18 percentage points higher than all other Christians (46 percent),” said Yale Project on Climate Change Communication. 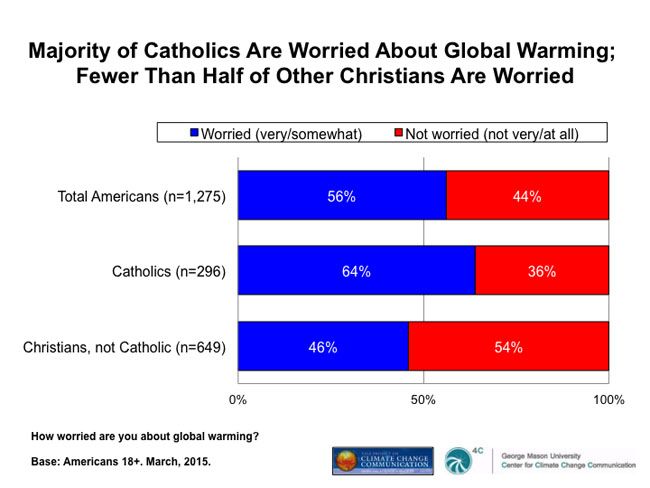 It makes sense then, that more Catholics also express higher support for climate change policies than other Christians. “Catholics expressed the highest levels of support for funding more research into renewable energy sources, such as solar and wind power (81 percent) and providing tax rebates for people who purchase energy-efficient vehicles or solar panels (81 percent),” according to Yale Project on Climate Change Communication.

Why more U.S. Catholics believe in climate change than other Christians is probably a complicated answer, but it certainly helps that their current leader, Pope Francis, who is extremely popular in the U.S. and globally, is an outspoken advocate for action on climate change.

Pope Francis celebrated his second anniversary as supreme pontiff on Friday, “Riding a wave of popularity that has reinvigorated the Catholic Church in ways not seen since the days of St. John Paul II,” according to the Chicago Tribune. A recent poll from the Pew Research Center shows that nine out of 10 U.S. Catholics have a favorable view of Pope Francis, including six in 10 who have a “very favorable” view. The Pope is also viewed favorably by non-Catholics, including those with no religious affiliation. In a pew poll, 70 percent of all Americans and even 68 percent of religious “nones” view the so-called “people’s Pope” favorably.

He’s already more popular with U.S. Catholics than his immediate predecessor, Pope Benedict XVI, and almost as popular as Pope John Paul II, who has already been made a saint by the Catholic Church and is “widely considered one of the most charismatic and impactful pontiffs of the modern era,” according to Pew.

In the last few months, the Pope has made headlines time and time again for his bold statements—saying that acting on climate change is “essential to faith,” blasting “unbridled consumerism” for destroying the planet in a letter to G20 leaders before their annual summit, and calling the destruction of nature a “sin of modern times.” Many Catholics around the world used the Pope’s visit to the Philippines in January as an opportunity to urge the holy leader to take strong action on climate change.

His encyclical on the environment, which is expected to be released in June or July, is highly anticipated. The Pope has said he hopes the encyclical will spur negotiators at the Paris climate talks in December to make “courageous” decisions, according to the Chicago Tribune. He is also scheduled to visit the U.S. in September with a special visit to Congress, 30 percent of whose members identify as Catholic.

Cardinal Peter Turkson, the Vatican official who helped draft the encyclical said at a Lenten lecture at St. Patrick’s Pontifical University in Maynooth, Ireland that 2015 is “a critical year for humanity,” according to the National Catholic Reporter. In addition to the Paris climate talks, Turkson cited the Third International Conference on Financing for Development in July in Addis Ababa, Ethiopia and the U.N. General Assembly’s meeting in September as two crucial global conferences to address climate change.

“The coming 10 months are crucial, then, for decisions about international development, human flourishing and care for the common home we call planet Earth,” said Turkson.