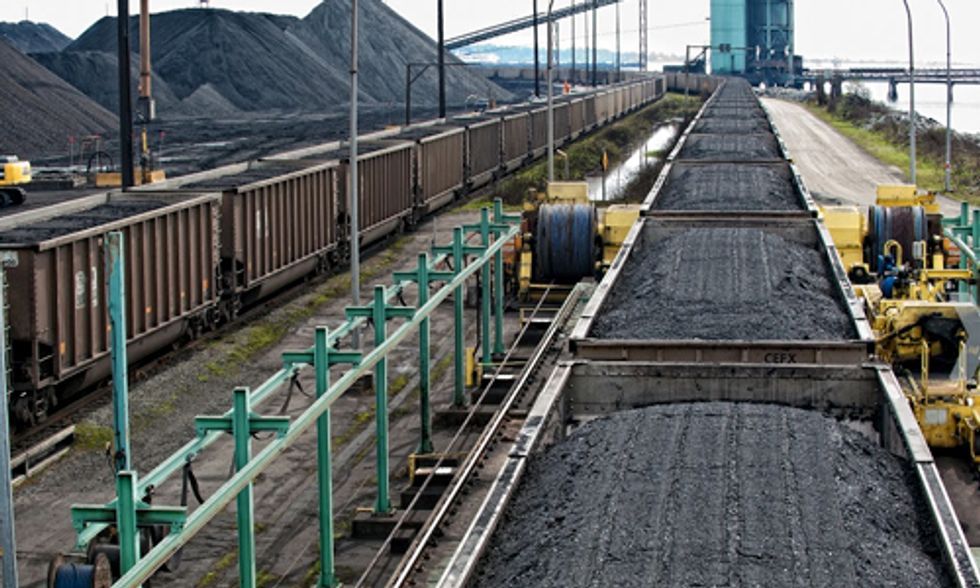 The U.S. District Court for the Eastern District of Washington denied a motion to dismiss, allowing the Clean Water Act case to proceed against BNSF Railway Company (BNSF) for coal contamination of U.S. waterways. The Sierra Club, Puget Soundkeeper, Columbia Riverkeeper, Spokane Riverkeeper, RE Sources for Sustainable Communities, Natural Resources Defense Council (NRDC) and Friends of the Columbia Gorge filed the lawsuit on July 24, 2013, after finding substantial amounts of coal in and along several Washington waterways near BNSF rail lines. A similar case is also pending before the Western District of Washington in Seattle.

According to sworn testimony by BNSF Vice President of Transportation Gregory Fox, "BNSF estimates that up to 500 pounds of coal dust may be lost from the top of each car." The company currently sends four uncovered coal trains through the state every day, each with an average of 120 rail cars. Based on the company's figures, BNSF's trains lose an estimated 240,000 pounds of coal dust  along its route daily.

"This victory is the first step in holding BNSF accountable for their continual pollution of our waterways," said Cesia Kearns of the Sierra Club. "The court's decision to move the case forward is a step in the right direction to stop coal—and its toxic associates, lead, arsenic and mercury—from further poisoning our fish, our water and our families. We take these threats seriously, and after today’s court decision we hope BNSF finally will too."

The conservation groups point to BNSF's long history of violating the Clean Water Act, which plainly states that dumping of any kind into a U.S. waterway without what is known as a National Pollutant Discharge Elimination System (NPDES) permit, is a violation of federal law. Each violation of the Clean Water Act carries a fine of $37,500, and the plaintiffs assert that every rail car that loses coal is considered a unique violation—a hefty number when considering four trains a day, at 120 cars each travel through Washington.

"BNSF should focus on cleaning up its act instead of facing substantial fines for polluting America's rivers," said Morgan Wyenn, NRDC attorney. "We're committed to holding BNSF accountable for its violations of the Clean Water Act and protecting our waterways from toxic coal dust."

The implications of the case are monumental, as the Northwest has become ground zero in the fight to stop three proposed coal export terminals in Washington and Oregon. If built, Washington communities like Spokane would see an increase of 42 additional uncovered coal trains per day. Residents already experiencing the results of four uncovered daily coal trains say that they hope that this lawsuit will teach BNSF a lesson in corporate responsibility.

"BNSF's plans to increase its daily coal train traffic by more than ten times the current amount is a testament to how important it is that they swiftly and responsibly find a solution to their coal pollution problems before further damaging our precious waterways, like the Spokane River," said Bart Mihailovich, director of Spokane Riverkeeper. "If they want to continue to be in the risky business of shipping coal, they need to assume responsibility for all of the costs that go along with it. Washingtonians are fed up with subsidizing their dangerous operations with the health of our families and communities."

“We hope that BNSF will start taking their coal dust pollution problem seriously instead of looking for loopholes,” said Brett VandenHeuvel, executive director of Columbia Riverkeeper, an organization that works to reduce toxic pollution and protect salmon in the Columbia River. “It’s time to put an end to illegal pollution and work to restore our waterways.”

BNSF is the second largest coal shipper in the nation, shipping coal through 28 states and near countless bodies of water. The original Clean Water suit was filed against BNSF in Washington’s Western District on June 5, 3013.

"This milestone in our case sends a clear message to BNSF and the coal companies that communities along the rail line value clean water and corporate accountability over the profits of big business," said Crina Hoyer, executive director of RE Sources for Sustainable Communities.

The plaintiffs are represented by the Law Offices of Charles M. Tebbutt, P.C. of Eugene, OR, Andrea Rodgers Harris of Seattle, WA, Jessica Yarnall Loarie of the Sierra Club Law Program and David Pettit and Morgan Wyenn of NRDC.