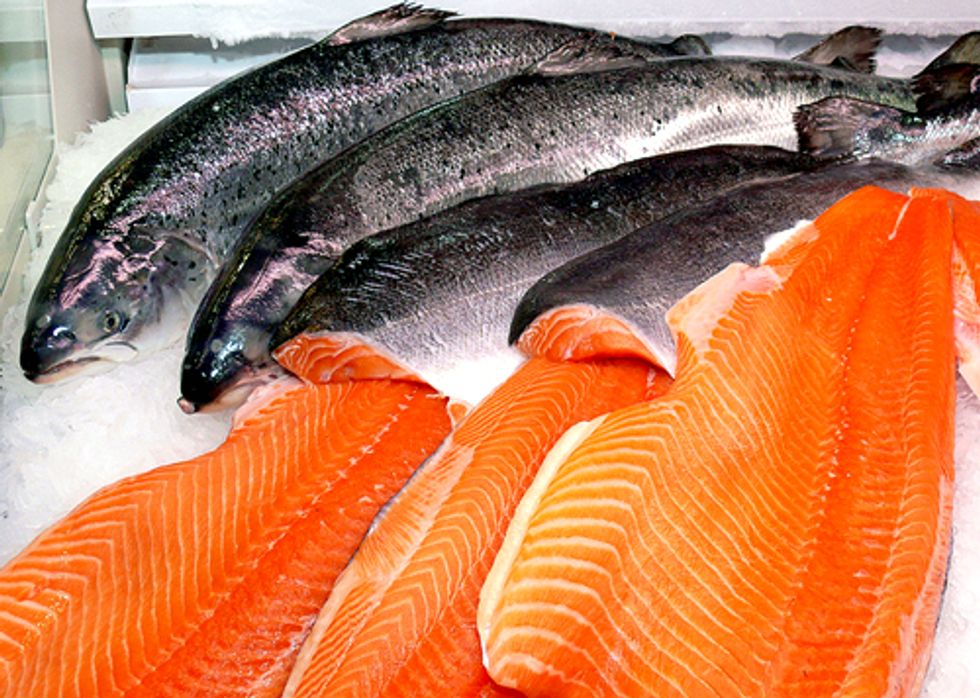 Many stores have already agreed to sign-on to the promise not to sell GE seafood, including Whole Foods, Trader Joes, Marsh Supermarkets, Aldi and PCC Natural Markets. Photo by John Bostock

A coalition of consumer, health, food safety and fishing groups launched the Campaign for Genetically Engineered-Free Seafood by announcing yesterday that several major grocery retailers representing more than 2,000 stores across the U.S. have already committed not to sell genetically engineered seafood if it is allowed onto the market.

Stores that have committed to not offer the salmon or other genetically engineered seafood include the national retailers Trader Joe’s (367 stores), Aldi (1,230 stores), Whole Foods (325 stores in U.S.); regional chains such as Marsh Supermarkets (93 stores in Indiana and Ohio), PCC Natural Markets (nine stores in Washington State); and co-ops in Minnesota, New York, California and Kansas.

“We applaud these retailers for listening to the vast majority of their customers who want sustainable, natural seafood for their families. Now it’s time for other food retailers, including Walmart, Costco and Safeway, to follow suit and let their customers know they will not be selling unlabeled, poorly studied genetically engineered seafood,” said Eric Hoffman, food and technology policy campaigner with Friends of the Earth.

"Consumers Union has serious concerns about the safety of the first genetically engineered fish, a salmon engineered to grow to maturity twice as fast as wild salmon. FDA decided based on data from just six fish that there was no increased risk to people with fish allergies. However, even these meager data suggest that these fish show increased allergic potential," says Michael Hansen, PhD, senior scientist with Consumers Union, the advocacy arm of Consumer Reports.

“We won't sell genetically engineered fish because we don’t believe it is sustainable or healthy. It is troubling that the FDA is recommending approval of AquaBounty’s salmon as a ‘new animal drug,’ subjecting these engineered creatures to less rigorous safety standards than food additives. That’s not a credible safety assessment,” said Trudy Bialic from PCC Natural Markets in Washington State.

“Simply put, this genetically engineered fish is unnecessary and is a problem masquerading as a solution,” said Heather Whitehead, online campaigns director at Center for Food Safety. “We’re excited to see that grocery retailers agree that there is no need to introduce an unnecessary, unpopular and risky new technology to the marketplace without adequate assessment, posing risks to human health, the environment, wild salmon,  and the sustainable fishing industry.”

To avoid confusion in the marketplace and ensure sustainable seafood, a coalition of 30 groups led by Friends of the Earth—including the Center for Food Safety, Food & Water Watch, Consumers Union and Healthy Child Healthy World—are asking grocery stores, seafood restaurants, chefs, and seafood companies to join the Pledge for GE-Free Seafood and publicly commit to not knowingly purchase or sell genetically engineered salmon or other genetically engineered seafood. The Pledge for GE-Free Seafood is another way for grocery stores to let their customers know about their purchasing policies.

“Parents are busy enough without having to worry if they're feeding their kids genetically engineered seafood. That's why we're excited about the Pledge for GE-Free Seafood," said Alexandra Zissu, editorial director of Healthy Child Healthy World, a family advocacy group. "Since the FDA will likely not label genetically engineered fish, this pledge will help parents—and all of us—know where we can safely shop to avoid eating the unknown. Then the focus can return to family meal fun, not risk management."

“Most consumers don't want to eat genetically engineered salmon, but without mandatory labeling it will be hard for them to avoid. That's why the stores who have committed to not to sell genetically engineered seafood are making a smart move and giving their customers what they want—a way to avoid this controversial, unnecessary biotech fish,” said Patty Lovera, assistant director of Food & Water Watch.