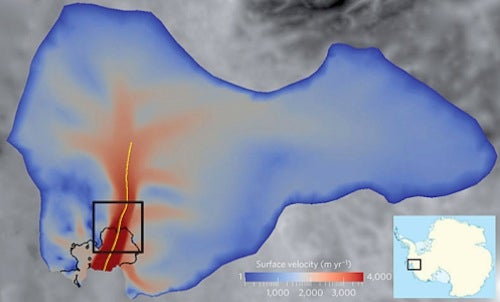 A major Antarctic ice mass, the Pine Island Glacier, is melting irreversibly and could add as much as a centimeter to global sea level rise over the next 20 years alone, according to new research published in Nature Climate Change. 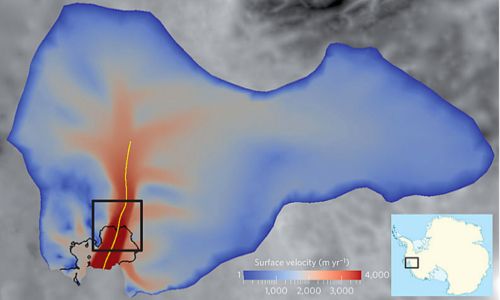 Calculations show that the Pine Island Glacier’s “grounding line”—where land-based ice meets a floating ice shelf that is an extension of the glacier—has retreated roughly 10 kilometers in the past decade. Scientists say that the grounding line is in the process of a 40-kilometer retreat that could push it beyond an important tipping point.

Pine Island Glacier is a major contributor to global sea level rise and has been losing massive amounts of ice for decades, accounting for 20 percent of the West Antarctic Ice Sheet’s total ice loss. An international research team says that the Pine Island Glacier has been losing 20 billion tons of ice annually for the past two decades and could lose 100 billion tons annually over the next 20 years.

The glacier ” has started a phase of self-sustained retreat and will irreversibly continue its decline,” says Gael Durand, a glaciologist with France’s Grenoble Alps University.