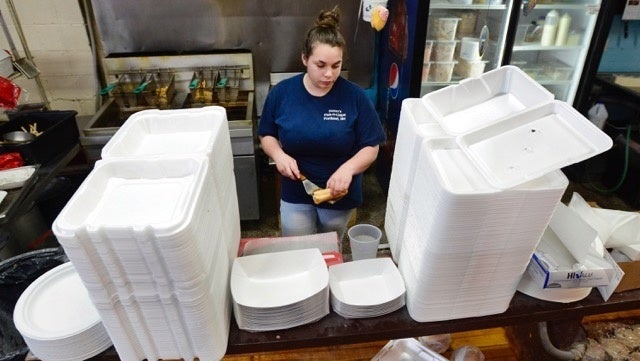 Democratic Maine Governor Janet Mills called the bill an “important step forward in protecting our environment” when she signed it into law, The Associated Press reported.

The bill would ban grocery stores, restaurants, coffee shops, food trucks and other similar businesses from using cups or containers made from polystyrene, otherwise known as Styrofoam, The Portland Press Herald reported. The ban will go into effect January 1, 2021 and would not cover hospitals, seafood shippers or vendors of pre-packaged meat.

"Both Maryland and Maine have passed a ban on styrofoam food containers!

Check out what other states are pursuing similar legislation at https://t.co/uZzUciuLoj" pic.twitter.com/iyeDAleyZE

“Maine has proven itself an environmental leader once again, this time in eliminating disposable foam containers that have become a common, costly, and deadly form of plastic pollution,” Sustainable Maine Director at the Natural Resources Council of Maine (NRCM) Sarah Lakeman told the Portland Press Herald.

Maine is at the head of a growing number of states that are considering bans on the material. Maryland is another early leader: A Styrofoam ban passed its House and Senate in early April with enough votes to override a potential veto from Republican Governor Larry Hogan, National Geographic reported. As of April 24, Hogan had less than a month to sign the bill, or let it pass into law without a signature, according to U.S. PIRG. Once it is officially passed, the Maryland bill will enter into effect July 1, 2020, six months ahead of the Maine bill, according to National Geographic.

Bills to ban foam containers are also close to passing the state legislatures of Colorado, New Jersey and Oregon, U.S. PIRG said. The National Caucus of Environmental Legislators counted 11 states in addition to Maine that are considering legislation on polystyrene.

Municipalities and counties moved ahead of the states in restricting the material, among them Seattle, Washington, D.C., Portland, Oregon, New York and San Francisco, National Geographic reported. In both Maine and Maryland, the state bans followed local restrictions, including in Portland, Maine and Maryland’s most populous Prince George’s and Montgomery counties. In total, more than 150 U.S. cities or regions have banned Styrofoam, MRCM said in a press release.

Brooke Lierman, a Democrat representing Baltimore in Maryland’s House of Delegates, said she introduced legislation banning Styrofoam twice before her third attempt succeeded, in part thanks to a growing movement against plastic pollution.

“I think we’ve reached a tipping point,” she told National Geographic. “People are seeing how ubiquitous single-use plastics are, that they are not recyclable and never going away. People are beginning to understand the importance of living more sustainably.”

Opponents of the bills in both Maine and Maryland said they would impose higher costs on small businesses.

“These types of issues are better dealt with on a regional or national basis due to unbalanced cost impact it will have on Maine businesses,” Maine State Chamber of Commerce lobbyist Ben Gilman told The Associated Press.

Supporters, on the other hand, see the bans as a way to reduce plastic litter in the environment and in waterways. Baltimore’s Mr. Trash Wheel, which collects trash from the harbor, gathers an average of 14,000 Styrofoam containers a month. In Maine, 256 pieces of single-use foam are used a year, but cannot be recycled, MRCM said. Plastic foam containers are also one of the 10 most littered items nationwide.