Magnetic North Pole Is Moving Toward Russia at a Swift Pace, Confounding Scientists 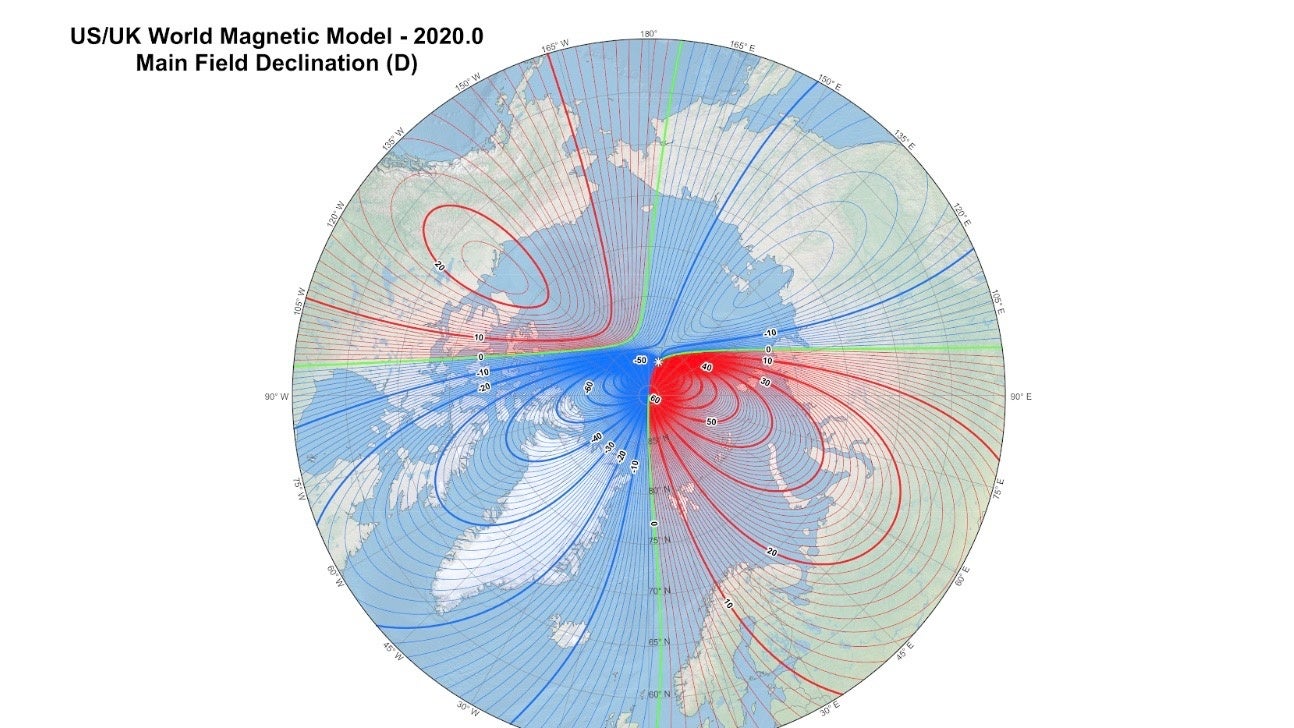 Global map of declination and the dip pole locations for 2020. NOAA NCEI / CIRES

Earth’s magnetic north pole, which serves as an anchor point for our navigation has been actively moving east from the Canadian Arctic towards Russia, as CNN reported.

The magnetic north pole, unlike geographic poles, is capable of moving and has traveled about 1,400 miles since 1831. However, in recent years, the magnetic north pole has moved at a surprisingly swift pace, confounding scientists looking for an explanation, according to CNN.

The rapid movement of the magnetic north pole forced the researchers who create the World Magnetic Model (WMM) to create a new forecast a year ahead of schedule, according to the WMM press release. The WMM is maintained jointly by the National Oceanic and Atmospheric Administration and the British Geological Survey.

The WMM, pictured above, is a portrayal of the planet’s magnetic field that gives compasses dependable accuracy. NOAA NCEI

The magnetic north was moving so swiftly that the WMM released an interim update in February to avoid navigational or operational issues with the discrepancy between where the true magnetic north pole is and where the 2015 model pegged it to be, according to Forbes.

To figure out where the magnetic north is and to create the model, the researchers look at satellite data and data from 160 land-based observatories. The model is updated every five years, so the next one is due in 2025, as Phys.org reported.

The updated model, which is used by the civilian navigation systems the North Atlantic Treaty Organization and U.S. and British militaries, shows the magnetic north pole moving towards Siberia, though it has slowed its pace to 25 miles per year, or 40 kilometers per year, as Forbes reported.

The location of the magnetic north pole stems from geological processes deep under the Earth’s crust. The Earth’s molten iron outer core moves as the planet spins. The flow of molten iron creates a magnetic field that determines the poles. The magnetic field also protects Earth from solar wind and charged particles from the sun, as Forbes reported.

From time-to-time the magnetic poles flip, meaning that the magnetic north pole is near the South Pole. While has happened a few times in Earth’s history, it is a slow and arduous process that takes 22,000 years to complete, which researchers say is much longer than anticipated or expected, according to CNN. The last time polarity reversal took place was 770,000 years ago.

Scientists have figured out these reversals from rock records, ocean sediments, Antarctic ice cores and lava flows. Those samples show researchers how Earth’s magnetic field has weakened, shifted, stabilized and reversed over a million years, according to CNN.

“Reversals are generated in the deepest parts of the Earth’s interior, but the effects manifest themselves all the way through the Earth and especially at the Earth’s surface and in the atmosphere,” said Brad Singer, a University of Wisconsin-Madison geologist to CNN. “Unless you have a complete, accurate and high-resolution record of what a field reversal really is like at the surface of the Earth, it’s difficult to even discuss what the mechanics of generating a reversal are.”

As recently as 2000, magnetic north was moving at just six miles per year. While it has ramped up speed, the movement is unlikely to impact most people, though non-scientists may notice tweaks to GPS applications and runway markers at airports, as Phys.org reported.

Correction: This article has been corrected to reflect that as recently as 2000, magnetic north moved just six miles per year, not six miles per hour.