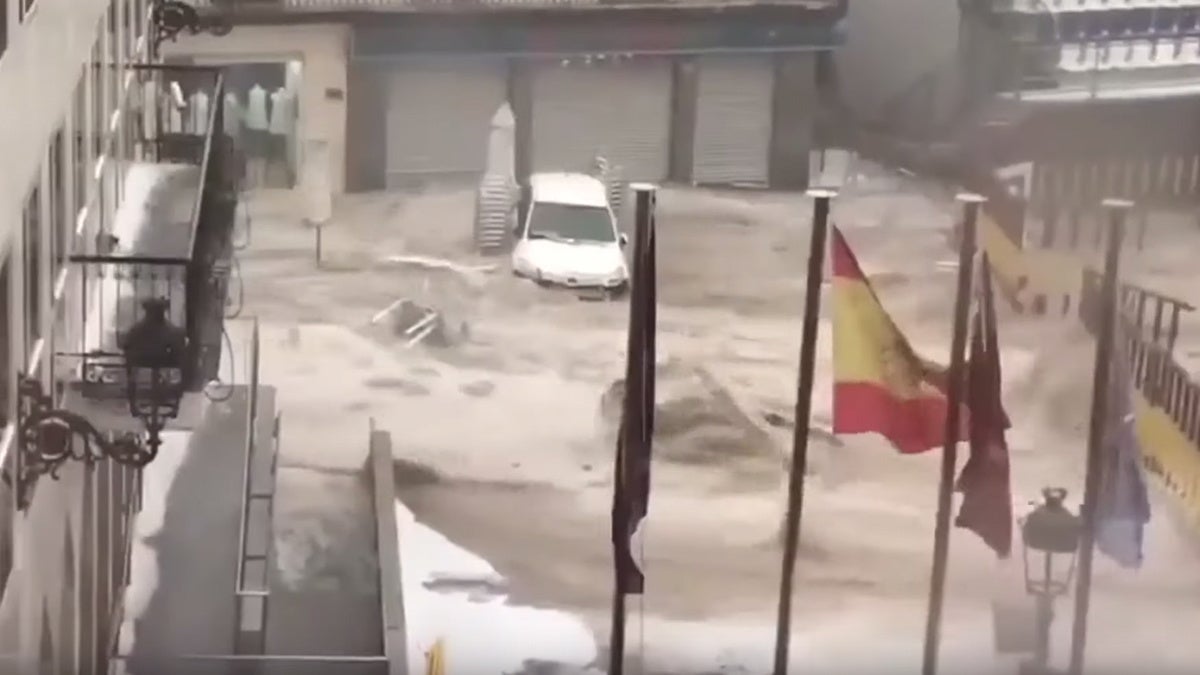 Cars and furniture float down a street during flash floods in Madrid, Spain on Aug. 26. Morning D.E.W. / YouTube

The storm closed roads and subway tunnels that emergency services were still working to clear Tuesday morning. The two major highways that circle the city were closed temporarily, and flights had to be diverted from Madrid’s Barajas airport.

Rain and hail struck hardest in the municipality of Arganda del Rey, southeast of Madrid, El País reported. Flood waters swept parked cars and furniture down the streets of the city, which is located in a valley.

“Trying to stabilize the situation and give an account of urgent requirements. The flash flood has been terrible. All services are working at full capacity to normalize [the situation]. Be alert to instructions,” Pedro Guillermo Hita Téllez, the Socialist Party mayor of Arganda del Rey, tweeted, as El País reported.

While emergency services received more than 1,100 calls Monday and firefighters responded to more than 200, no one was injured in the storm, The New York Times reported.

The spectacle was dramatic, though. Spain’s meteorological agency AEMET reported more than 9,300 lightning strikes in a six-hour period, according to El País.

“The rain has been fairly heavy but it is not unusual for this time of the year. At the end of summer, the atmosphere is unstable, which causes air to rise for dynamic reasons, not thermal ones. This leads to quite strong rainfall and storms,” he said.

But AEMET spokesperson Rubén del Campo told The Guardian that where the rain fell was unusual.

“What happened yesterday is that the Madrid area, which bore the brunt of it, isn’t a region that’s very accustomed to these levels of precipitation,” del Campo told The Guardian. “It’s normally the Mediterranean regions that get the most torrential rain. But it does sometimes happen and we saw very intense rain and hail in Arganda del Rey.”

Del Campo said the climate crisis might have contributed to the storm.

“It’s very difficult to say that what happened in Madrid yesterday was down to climate change, but we are living in a situation where there’s no doubt that these higher temperatures mean there’s more water vapour in the atmosphere — and that’s the fuel that feeds the storms. That’s a fact.”

The rain was predicted to move east and fall on Valencia and the Balearic Islands before heading towards Italy Wednesday morning, The Guardian reported.