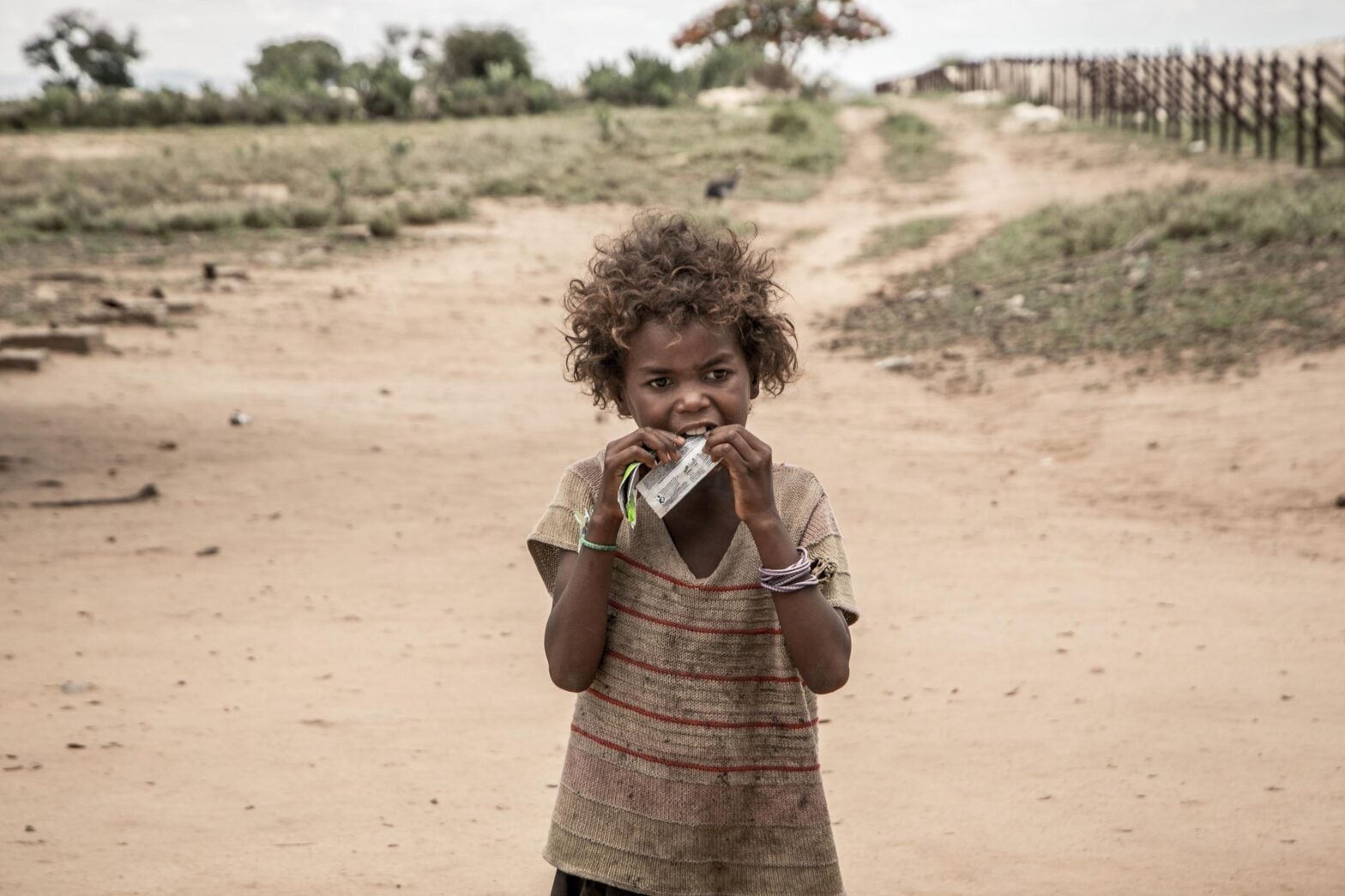 A girl eats a food supplement distributed during a malnutrition screening session organized by the NGO Action Contre la Faim and the World Food Program (WFP) in the municipality of Ifotaka, Madagascar, on December 14, 2018. The entire southern part of Madagascar has been caught up in a drought that has made water increasingly scarce, wrecking even efforts to grow rice—the staple food. RIJASOLO / AFP / Getty Images

Climate experts are warning the current extreme food shortage in southern Madagascar, following a dearth of rain for the last four years, has driven the country to the brink of the world’s first famine driven almost entirely by the climate emergency.

The United Nations estimates that 30,000 people in the country are facing “level five” food insecurity, defined as a “catastrophe or famine” according to the Integrated Food Security Phase Classification. With Madagascar’s regular pre-harvest “lean season” looming, many more are expected to face catastrophic hunger in the coming months.

“These are famine-like conditions and they’re being driven by climate, not conflict,” Shelley Thakral, senior communications specialist for the World Food Program, told the BBC.

“This is unprecedented,” Thakal added. “These people have done nothing to contribute to climate change. They don’t burn fossil fuels… and yet they are bearing the brunt of climate change.”

#Madagascar is on the brink of experiencing the world's first "climate change famine".

We are living in a #ClimateEmergency. Our leaders need to take decisive action to reverse it.#ClimateJustice https://t.co/42QxOHYI1J

In interviews with the press, families in farming communities across the southern part of the country have described foraging for cactus leaves and insects including locusts in order to avoid starvation as they struggle to grow crops.

“I clean the insects as best I can but there’s almost no water,” a mother of four named Tamaria, in the village of Fandiova, told the BBC.

Madagascar was identified in the latest report (pdf) by the Intergovernmental Panel on Climate Change (IPCC) as a country that was expected to face an increase in agricultural and ecological drought, particularly if global policymakers fail to rapidly work to eliminate fossil fuel extraction and reduce the heating of the planet.

Dr. Rondro Barimalala, a scientist from Madagascar who works at the University of Cape Town in South Africa, said the current crisis in his home country is clearly linked to the climate emergency.

“With the latest IPCC report we saw that Madagascar has observed an increase in aridity. And that is expected to increase if climate change continues,” Barimalala told the BBC. “In many ways this can be seen as a very powerful argument for people to change their ways.”

The U.N.’s most senior official in the country, resident coordinator Issa Sanogo, recently described traveling through southern Madagascar and witnessing the crisis:

In the town of Amboasary Atsimo, about 75 per cent of the population is facing severe hunger and 14,000 people are on the brink of famine.
This is what the real consequences of climate change look like, and the people here have done nothing to deserve this. Nevertheless, I have seen that they are ready to take up the challenge, with our immediate and medium-term support, and get back on their feet.
[…]
[T]hese people have been significantly affected by sandstorms; all of their croplands are silted up, and they cannot produce anything.

“We are in danger of seeing people who have endured the prolonged drought enter the lean season without the means to eat, without money to pay for health services, or to send their children to school, to get clean water, and even to get seeds to plant for the next agricultural season,” Sanogo said. “If we don’t act soon, we will face a much more severe humanitarian crisis.”

Considering Madagasans’ “negligible contribution to the climate crisis,” tweeted the Environmental Justice Foundation, the current catastrophe represents “an appalling climate injustice.” “Everyone should have a safe place to live,” the group said. “Wealthy countries must step up and cut emissions now.”