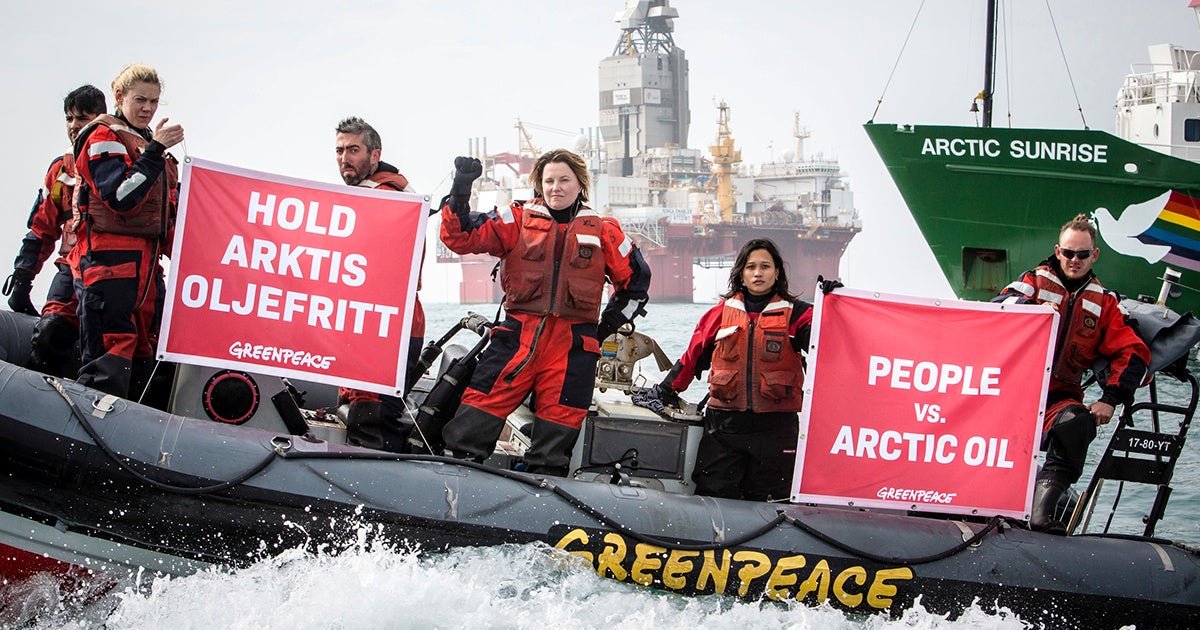 Eleven peaceful activists from the Greenpeace ship Arctic Sunrise have taken to the water in inflatable boats with handheld banners to oppose the Statoil Songa Enabler oil rig, 275 km North off the Norwegian coast, in the Arctic Barents sea.

The banners say: “People Vs. Arctic Oil” and are directed at Statoil and the Norwegian government, which has opened a new, aggressive search for oil in the waters of the Barents Sea.

Climate change survivor and activist Joanna Sustento from the Philippines, and actress and activist Lucy Lawless from New Zealand, are among the 19 nationalities who have traveled to the high Northern waters onboard the Arctic Sunrise. Sustento wants the Norwegian government to take responsibility for its climate commitments and development of a new oil frontier in the Arctic. She lost her entire family, except for her brother, to Super-typhoon Haiyan in 2013 which left large parts of her hometown, Tacloban, in ruins.

“It is hard for me to grasp and accept that a government like Norway’s is opening up new Arctic oil drilling, knowing full well it will put families and homes in other parts of the world at risk. I’m here in the Arctic to see this irresponsibility with my own eyes; share my story about the human consequences of climate change; and call on the Norwegian government to put a stop to this dangerous search for new oil,” said Sustento. 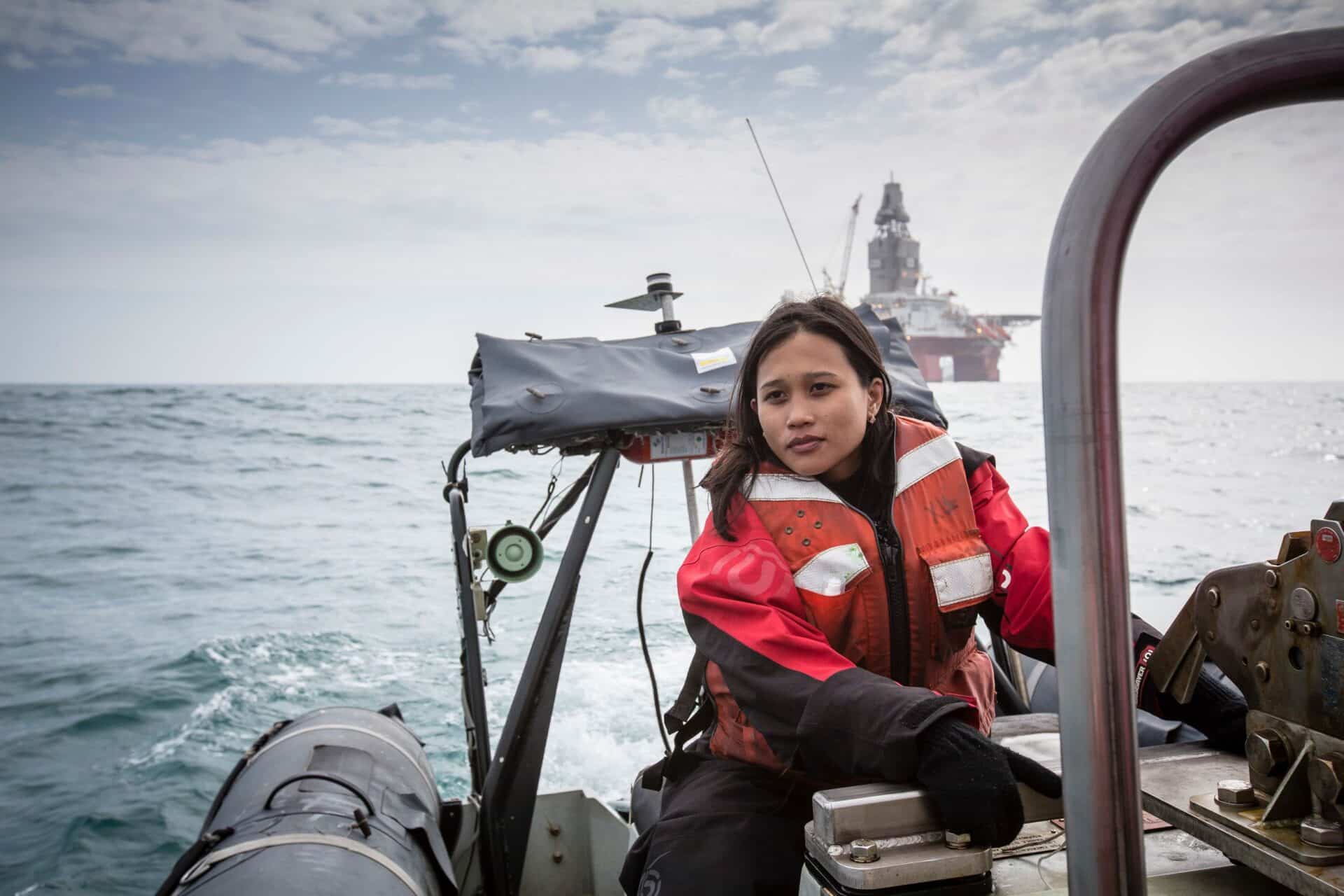 Just two weeks after signing the Paris climate agreement, the Norwegian Government awarded 13 oil companies 10 new licenses in a completely new area, for the first time in more than 20 years.

“It is scary to think that super-typhoons could become the new normal if governments like Norway’s allow more oil drilling. I couldn’t stop the typhoon that destroyed my home, but Norway could play a role in curbing the severity and frequency of these storms right now. It gives me hope to see that right now people are taking peaceful action for the climate all over the world and holding governments accountable,” added Sustento.

Greenpeace and the Norwegian organization Nature and Youth, have also filed a lawsuit against the Norwegian government, arguing that the new oil licenses violate both the Paris climate agreement and paragraph 112 of the Norwegian Constitution, which commits the government “to safeguard the people’s right to a clean and healthy environment for future generations.” 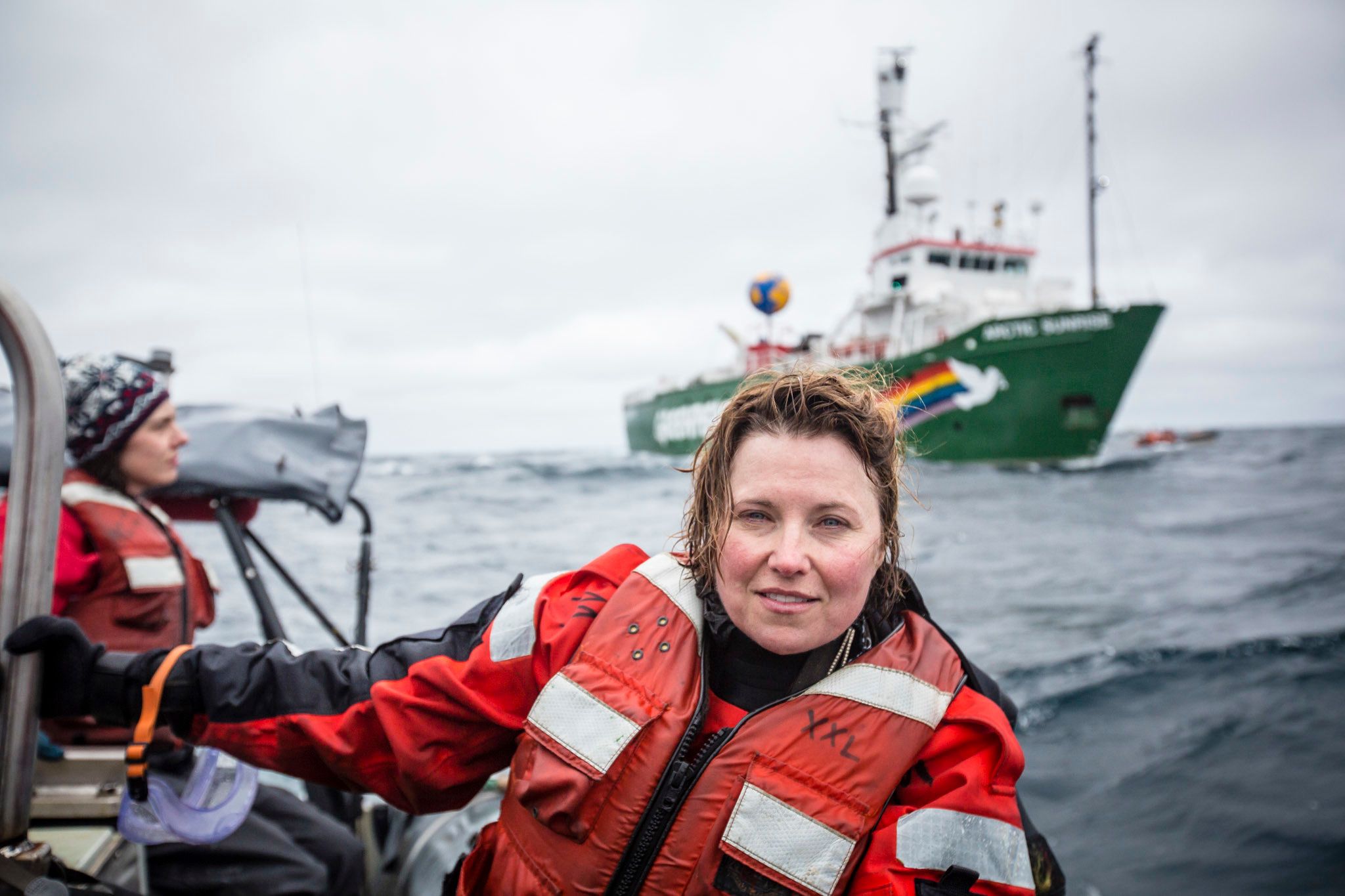 Lucy Lawless in RHIB with Arctic Sunrise in the background.Greenpeace

“I can’t stand by, doing nothing, when we know beyond a doubt that we can’t burn a single barrel of oil from a new well if we are to avoid a climate catastrophe. I don’t ever want to look my kids in the eye and explain why I didn’t do all I could to protect them from climate change. It is beyond my understanding that the Norwegian government is giving Statoil a ticket to drill like mad at the expense of future generations,” said Lawless.

The Statoil rig Songa Enabler is currently looking for new oil at the Gemini North license, and is expected to continue to the Korpfjell license later this summer. Both licenses were awarded in the 23rd licensing round that is subject of the court case filed by Greenpeace and Nature and Youth, scheduled for hearing on November 14. Statoil and the Norwegian government have decided to go ahead with the drillings despite the legal dispute.