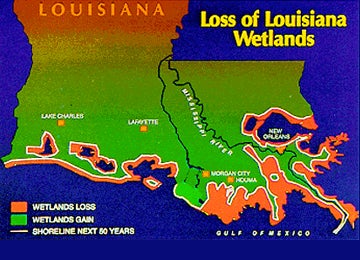 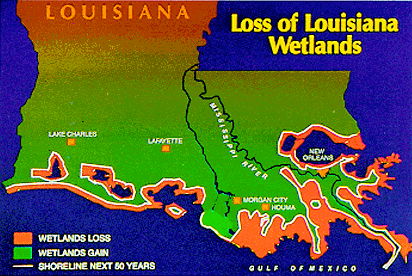 After decades of operating with complete disregard for the environment, the dirty energy industry finally has to face the music for destroying the wetlands that form a natural barrier against storm damage in the state of Louisiana.

The suit, filed by the board of the Southeast Louisiana Flood Protection Authority-East, claims that the oil and gas industry’s irresponsible pipeline placement, drilling and excavation methods have eroded and polluted vital wetlands in Louisiana.

The New York Times has more:

The board argues that the energy companies, including BP and ExxonMobil, should be held responsible for fixing damage done by cutting thousands of miles of oil and gas access and pipeline canals through the wetlands. It alleges that the network functioned “as a mercilessly efficient, continuously expanding system of ecological destruction,” killing vegetation, eroding soil and allowing salt water into freshwater areas.

The suit argues that the environmental buffer serves as an essential protection against storms by softening the blow of any incoming hurricane before it gets to the line of levees, flood walls, gates and pumps maintained and operated by the board. Losing the “natural first line of defense against flooding” means that the levee system is “left bare and ill-suited to safeguard south Louisiana,” the lawsuit says. The “unnatural threat” caused by exploration, it states, “imperils the region’s ecology and its people’s way of life—in short, its very existence.” 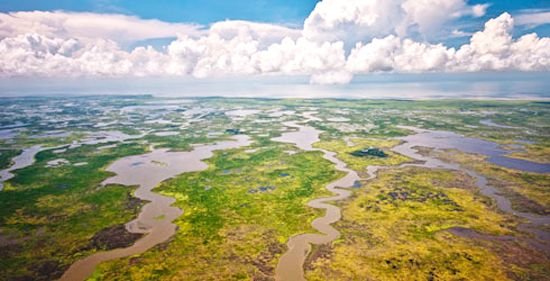 The suit alleges that the wetlands, which took more than 6,000 years to form, provide vital protection for the state from the impacts of severe storms, floods, and hurricanes. The degradation caused by the dirty energy industry’s activities leaves the state more vulnerable to the effects of severe weather.

The lawsuit has been adamantly opposed by Republican Louisiana Gov. Bobby Jindal who, according to The New York Times, claims that the board has “overstepped its authority” in filing the suit. It is worth noting that the dirty energy industry has been a substantial financial backer of Gov. Jindal, contributing nearly a quarter of a million dollars to his campaigns. They also report that Jindal claimed the board had been “hijacked” by “trial lawyers.”

Board member John Barry says that the board took all necessary steps, including conferring with the state Attorney General, before hiring an outside law firm and filing suit against the industry.

In the wake of Hurricane Katrina, the federal government spent roughly $14 billion to repair damaged levees around New Orleans. An attorney for the plaintiffs in the new lawsuit says that it is now time for private industry to pay their fair share for their role in the degradation of the wetlands and subsequent weakening of critical natural protections for the state in an era of pollution-fueled climate disruption.

The civil suit is a major step forward for all American citizens, not just those in the Bayou State. While major politicians like Gov. Jindal may oppose the suit, the necessity of it is clearly undeniable. This suit will serve as a bellwether case against the industry that, if successful, could lead to further lawsuits against the industry for similar damages all over the country.

Pay close attention to this case as it moves forward—it may just set a precedent that could help to hold the fossil fuel industry accountable for the extensive damage caused by their short-term thinking. In particular, it should put an end to the unnecessary destruction of our natural protective barriers against extreme weather damage.