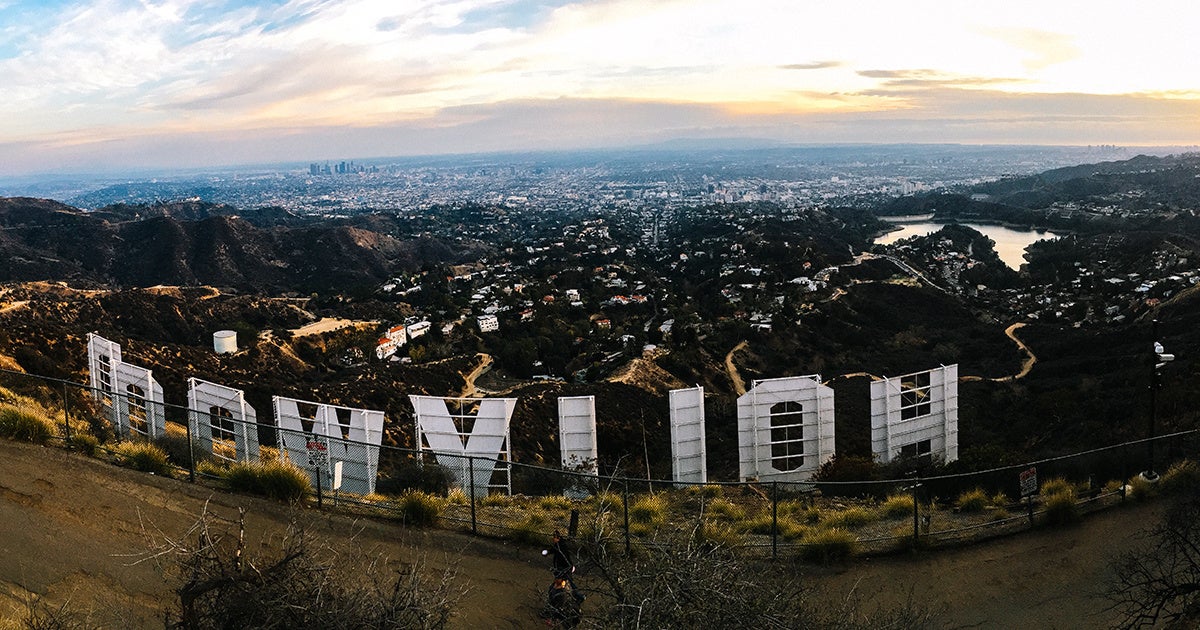 This month the United Nations Intergovernmental Panel on Climate Change released a startling report, which finds that severe impacts of climate change are happening much sooner than previously expected, and that countries must take far more aggressive actions to avoid the most catastrophic impacts. The report finds that the burning of fossil fuels must be curbed sharply.

The harmful role Wall Street banks play in propping up fossil projects around the world is increasingly known. Yet there is much less awareness of the role major cities play when they place billions of dollars of their public funds into these same Wall Street banks. According to L.A. city records, as of July 2018, Los Angeles had banking and/or investment relationships with several Wall Street banks, many of which are notorious for their financing of fossil fuel and human rights debacles around the world, including JP Morgan Chase, Citi, Bank of America and Wells Fargo.

According to Banking on Climate Change, a fossil fuel finance report card, between 2015 and 2017 these Wall Street banks collectively provided over $50 billion in financing for tar sands, ultra-deep water drilling, coal mining, coal power and liquid natural gas projects around the world. These projects contribute vast amounts of greenhouse gases into the atmosphere, and many of them have severe local environmental, social and human rights impacts as well.

But in 2018, cities have more ethical options. Rather than investing the public’s money in environmental and human destruction, cities can establish public banks. When properly structured and operated, public banks can prohibit the use of their funds for fossil fuel and other harmful projects. Instead, they can fund renewable energy and other green enterprises, affordable housing, education and low-cost loans to job-creating entrepreneurs—all while avoiding paying hundreds of millions of dollars in exorbitant fees to Wall Street banks.

When Los Angeles voters go to the polls next week, they will decide whether to approve Charter Amendment B, which amends the city’s charter to enable it to take affirmative steps to establish a public bank. And Los Angeles is a great case study on the need for public banks. According to Public Bank L.A., the city maintains bank accounts with between $4 billion and $12 billion in cash, and manages up to $45 billion in investments through large commercial banks.

The enormous sum of public funds that L.A. entrusts to fossil fuel banks undercuts the climate leadership of city officials. For example, this past August L.A. Mayor Eric Garcetti joined a coalition of hundreds of mayors across the country to condemn Donald Trump’s plans to weaken vehicle efficiency standards and rescind California’s waiver right to set stronger greenhouse gas regulations. In December 2016, Garcetti joined other mayors to denounce Trump’s decision to walk away from the Paris agreement. The city council has shown progressive streaks on banking issues as well. In December 2017, the Council unanimously voted to enforce both federal and state Community Reinvestment Act ratings disqualifying Wells Fargo from submitting a Request for Proposal for the city’s commercial banking services. And yet, the city still banks with Wells Fargo. 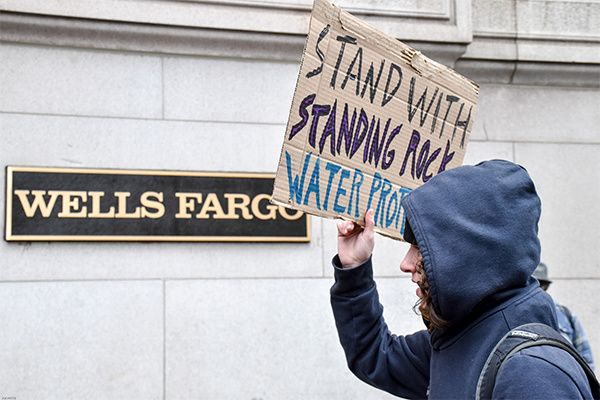 If L.A. voters approve Charter Amendment B, the city will be one step closer to creating a municipal bank and redirecting its billions of dollars of public funds to environmentally sound, fiscally smart, sustainable community needs. In doing so, L.A. will serve as a beacon of progress to inspire the larger national movement to establish public banks.

For a sense of why Los Angeles so badly needs to approve Charter Amendment B, we’ve included descriptions of just a handful of the harmful projects Los Angeles is currently supporting by keeping its money in fossil fuel banks (based on publicly available information). Here is a sample of some of the projects that LA’s banks support:

The Dakota Access Pipeline, or DAPL, extends over 1,000 miles across several U.S. states, damaging Native American ancestral lands and water. Passing within just a half-mile of the Standing Rock Indian Reservation, the pipeline has destroyed sacred sites and threatens the tribe’s drinking water with potential oil spills. Beginning in 2016, Native American water protectors, including Standing Rock Sioux tribal elders and members, led opposition to DAPL. Supported by thousands of allies, this grew into one of the largest and most iconic movements in the world to halt fossil fuel pipelines. In response to peaceful, prayerful resistance, police from several states and agencies, members of the U.S. National Guard and armed private security forces used military equipment and tactics, including attack dogs, to intimidate, assault, arrest and otherwise commit grievous human rights abuses against water protectors and their allies. Opposition to the pipeline expanded far beyond the project site and supercharged the growing global movement against financial institutions that support fossil fuel projects.

The proposed 600-mile Atlantic Coast Pipeline, running from West Virginia through North Carolina, is the third longest gas pipeline in production or in some phase of development over the past 20 years in the U.S. Trees have been cleared along the pipeline route and infrastructure development has begun. Although two lawsuits against the pipeline are now pending in federal and North Carolina courts, federal law allows pipelines to be constructed prior to the resolution of all litigation. The ACP was the only oil or gas pipeline to be on Donald Trump’s list of 50 Priority National Security Projects prior to his election.

According to published reports, the central purpose of the ACP is to enter South Carolina and eventually reach Elba Island, Georgia where gas will be exported from a liquid natural gas facility now under construction. This recognition raises serious concerns regarding the use of eminent domain to take privately owned property for private gain instead of public use. 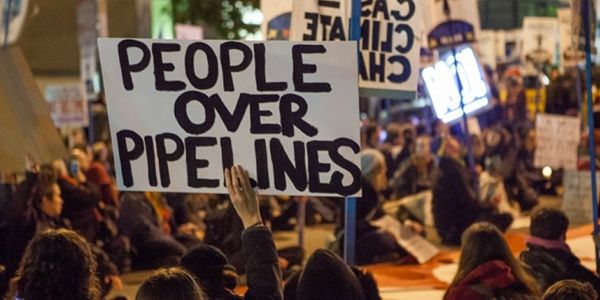 The ACP threatens the livelihood of more than 30,000 indigenous peoples that live along the pipeline route. In May 2018, an alliance of community, statewide and national groups filed a complaint to the U.S. Environmental Protection Agency (EPA) Civil Rights Compliance Office, alleging that the North Carolina Department of Environmental Quality discriminated on the basis of race and color in issuing permits and certifications to the ACP as part of the permitting process. In September 2018, environmental groups filed legal challenges in an appeals court against federal permitting agencies.

Once completed, the 4,800-megawatt Kusile coal plant in South Africa will be one of the largest coal plants in the world. The estimated annual greenhouse gas equivalent emissions of the plant—30 million tons—would increase South African energy sector emissions by 12.8 percent and the country’s total contribution to climate change by 9.7 percent. South Africa already has the distinction of being among the top global greenhouse gas emitters per capita. The Kusile project area already exceeds permitted ambient levels of hazardous air pollutants that create soot and smog, which cause harm to respiratory, cardiovascular and nervous systems, leading to heart disease, cancer, stroke and chronic lower respiratory diseases, according to Physicians for Social Responsibility. If completed, Kusile will increase the cost of electricity for the poor and household consumers to compensate for Apartheid-era “special pricing agreements” that give large industrial users, which consume most of South Africa’s electricity, guaranteed rates that are among the lowest in the world. The cost of Kusile, which in 2007 was estimated by Eskom to be 80 billion rand, had more than doubled to 172 billion rand by 2016. It is “expected to further strain Eskom’s financial resources, and place upward pressure on Eskom’s electricity price trajectory in the years ahead.” In 2015 the U.S. Securities and Exchange Commission charged Hitachi with violations of the Foreign Corrupt Practices Act in connection with contracts to build Kusile and Medupi (another enormous coal plant in South Africa), resulting in a $19 million settlement.

Long Phu-1 in Vietnam would emit an estimated 6.3 million tonnes of CO2 per year. As a “supercritical” coal power plant, Long Phu-1 is prohibited from being financed by most official government export credit agencies (ECA), including the U.S. Export-Import Bank. However, the former director of the EPA’s Air Enforcement Division, Bruce Buckheit, revealed that the project consulting firm Environmental Resources Management doctored the coal plant’s greenhouse gas emissions estimates to make Long Phu-1 appear to be a more efficient “ultra-supercritical” plant, which would be allowed under ECA coal financing restrictions. Analysis of Long Phu-1 by Friends of the Earth U.S. reveals that the project violates other international policies, including requirements to analyze alternatives, identify cumulative and associated risks and impacts, evaluate labor and working conditions, prevent pollution, protect community health, provide safety and security, and ensure biodiversity conservation. In February 2018, the New York Times reported that U.S. Export-Import Bank financing for Long Phu-1 had collapsed after it was revealed that project financiers included Vnesheconombank, a Russian bank that is on the U.S. government’s sanctions list and is part of a federal investigation into possible collusion between the Russian government and the Trump presidential campaign. It was also reported that a top Long Phu-1 project official had been sentenced to prison for corruption. MUFG and JP Morgan Chase, like the U.S. Export-Import Bank, must also comply with U.S. sanctions. However, it remains unclear whether these banks continue to be potential financiers of Long Phu-1.

Doug Norlen is the economic policy program director for Friends of the Earth.