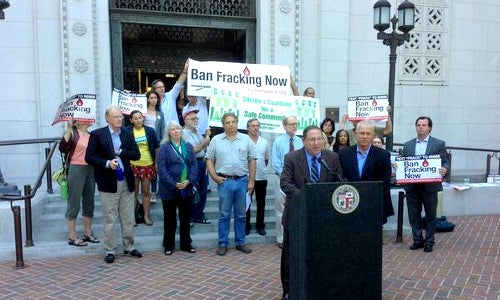 A Los Angeles city councilman is thinking big and long range when it comes to cutting greenhouse gas emissions.

Paul Koretz said the city should target a cut of 80 percent below 1990 levels by 2050, according to the Los Angeles Times.

“The climate crisis is no longer out there in the future,” Koretz told reporters at a news conference Friday. “It’s here. It’s now.” 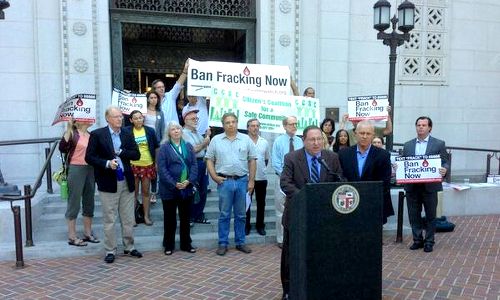 Los Angeles City Councilman Paul Koretz is pictured in 2013. He has shown a track record of environmental concern since assuming office five years ago. His latest example is an aggressive push for cutting greenhouse gas emissions in the city. Photo credit: @KevinTakumi/Twitter

Boston and San Francisco are among the cities with the aggressive target Koretz suggested. He plans on introducing it in a motion during council’s next meeting.

The city is already well on its way to achieving the goal it previously set forth of slashing emissions by 35 percent by 2030. Koretz’s office told the publication that Los Angeles had cut emissions 30 percent below 1990 levels by 2013.

Koretz’s multilayered plan includes installing more solar energy on city rooftops and energy efficiency retrofits across the city. He also wants the Los Angeles Department of Water and Power to meet the same emissions target two decades before the city.

The department’s emissions have dropped 22 percent from 1990’s levels, with “even more dramatic” cuts in store as coal is eliminated from the mix at the Navajo and Intermountain power plants, spokesman Joe Ramallo the Times.

Koretz has displayed a track record of environmental concern since assuming office five years ago. He was one of two members to introduce a motion for a fracking moratorium last year. He also introduced a motion banning the cultivation and sale of genetically engineered seeds and plants.