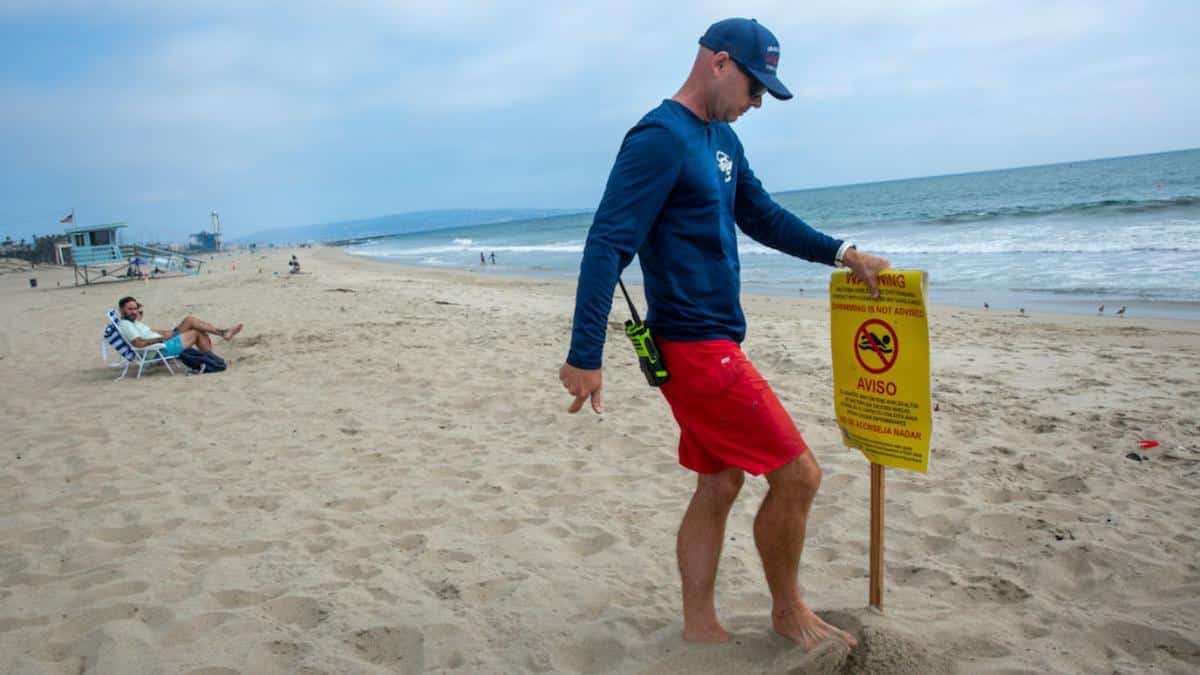 A lifeguard puts out a sign warning that swimming is not advised at Dockweiler State Beach in Playa del Rey as a result of 17 million gallons of untreated sewage spilling into the ocean. Mel Melcon / Los Angeles Times via Getty Images

The spill originated from the Hyperion Water Reclamation Plant, the city’s oldest wastewater plant, located near Dockweiler State Beach, according to CNN.

The incident was prompted by “an unusual amount of debris,” said Elena Stern, a senior public information director for the city’s department of public works, to The Guardian. “To avoid having the entire plant shut down, which would have been catastrophic, we had to discharge some of the untreated sewage to alleviate the system.”

The sewage was discharged for 8 hours, allowing 6% of Hyperion Plant’s daily load to enter the ocean, according to Fox 11 Los Angeles.

The Los Angeles County Department of Public Health advised people to avoid waters at these beaches, as reported by Fox 11 Los Angeles:

An advisory tweet was posted by the public health department on Monday stating El Segundo and Dockweiler beaches were closed due to the spill.

The public health department said they sent out a press release at 5:15 p.m. on Monday, but a copy seen by The Guardian listed the time released as 5:36 pm.

The department also said that workers began posting signage about the incident at 11 a.m., but a captain with the county’s fire department told the Los Angeles Times that his team learned about the spill at 12 p.m. when they saw a county official posting a notice at a lifeguard station.

The delayed communication prompted criticism. Janice Hahn, a county supervisor, said on Twitter, “What happened yesterday off the coast of Dockweiler Beach was irresponsible, unacceptable and dangerous.”

“It took way too long,” said Shelley Luce, head of Heal the Bay, to The Guardian. “There’s a protocol in place that requires immediate closing of beaches when there’s a raw sewage spill, and yet it took hours. When they did close the beaches, they went out and posted signs. There needed to be a much bigger effort to let people know.”

The beaches have reopened as ocean water tested over the past two days has been deemed acceptable, according to ABC 7. The water will continue to be sampled through Thursday.