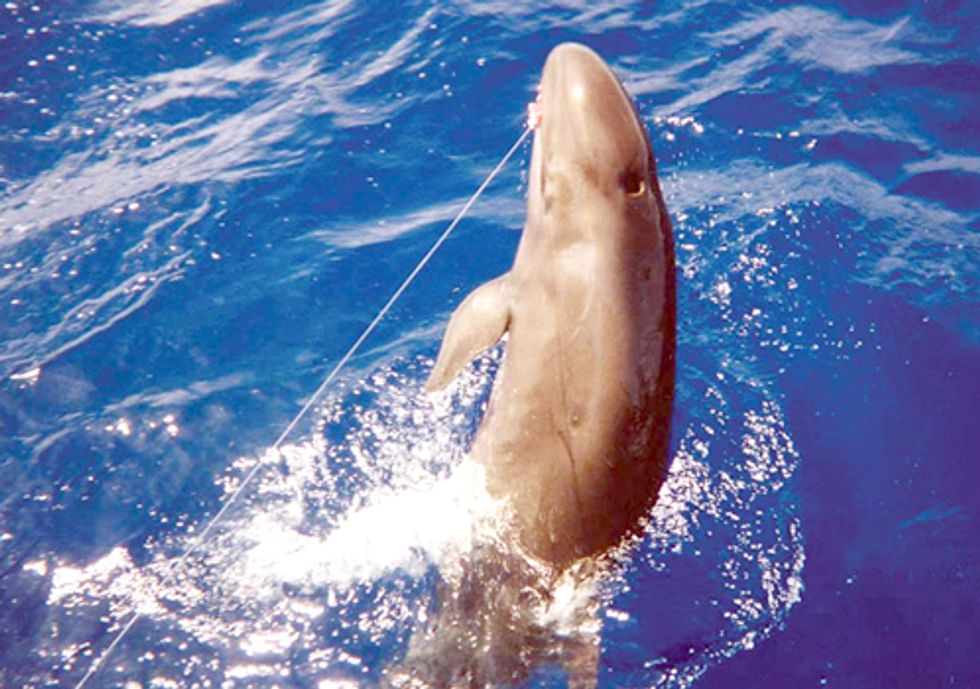 A false killer whale, snagged on a longline, becomes victim of commercial fishing. Photo by NMFS.

The new information highlights the need for NMFS to promptly finalize and implement a plan to protect false killer whales in Hawaiian waters, as required by the federal Marine Mammal Protection Act. In June 2012, Earthjustice, representing the Center for Biological Diversity and Turtle Island Restoration Network, sued NMFS in federal court over the agency’s failure to finalize the plan, which was due in December 2011.

“For years, the fishing industry has been saying that new surveys would show there are plenty of false killer whales and that we shouldn’t be concerned about the animals that are hooked and drowned each year in longline gear,” said Brendan Cummings of the Center for Biological Diversity. “Well, the survey data are now in, and they back up what we’ve been saying all along. If we want to save Hawaiʻi’s false killer whales, we need to take prompt action to stop these animals dying in the longline fisheries.”

Based on the new estimate, NMFS concluded that the Pelagic Stock could sustain nine deaths each year from interactions with commercial fisheries. The agency’s latest observer data show that the Hawaiʻi-based longline fisheries are killing an average of over 13 false killer whales each year, which is a dramatic increase from last year’s figure of nearly 11 whales per year and nearly half again what NMFS has said the population can sustain.

“The evidence is in, and the number of these beautiful animals dying from the longline fishery keeps going up. At this rate, we will lose Hawaiian false killer whales—another victim of unsustainable industrial longline fishing,” said Todd Steiner, biologist and executive director of the Turtle Island Restoration Network. “There is no excuse for inaction by NMFS. I imagine that President Obama wants his kids to see these magnificent toothed whales when they vacation in Hawaiʻi as adults, but that can happen only if the federal government takes immediate action to protect these animals from destructive fishing practices.”

NMFS’s latest report for the population of false killer whales found within 140 kilometers (76 nautical miles) of the main Hawaiian Islands (the “Hawaiʻi Insular Stock”) slightly increased the minimum population estimate, from 110 animals to 129 animals. The new estimate does not change NMFS’s conclusion that the Insular Stock—which NMFS has proposed to list as “endangered” under the Endangered Species Act—has declined by 9 percent per year since 1989. Observer data show that the longline fisheries are killing false killer whales from the Insular Stock at nearly double the rate the population can sustain.

“If we are to have any hope of saving Hawaiʻi’s false killer whales, it is time for NMFS to stop making excuses and to start complying with its legal obligation to protect these unique animals by promptly issuing and implementing a plan to reduce false killer whale deaths in the longline fisheries,” said Earthjustice Attorney David Henkin.