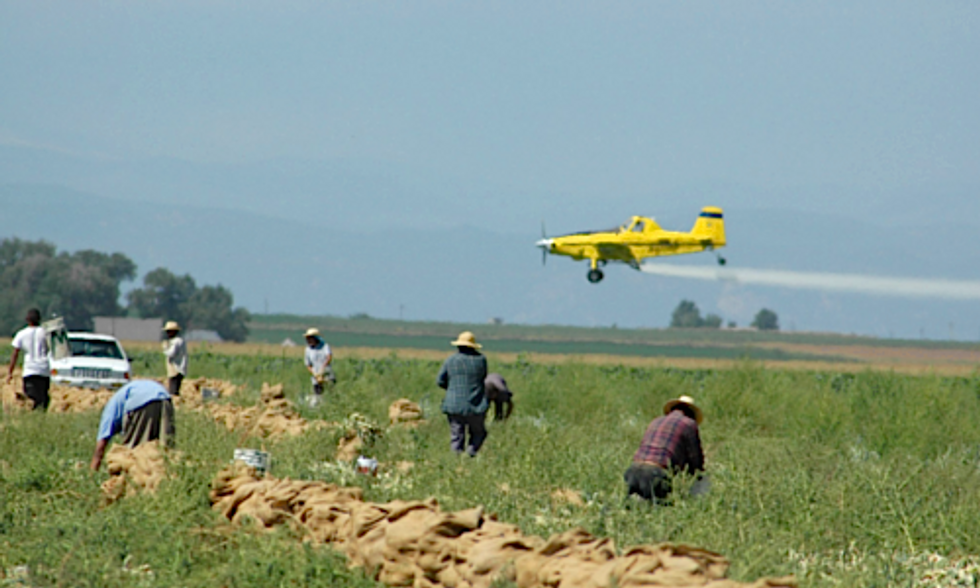 Ushering in what it called “milestone” changes to better protect the nation’s farmworkers from pesticides, the U.S. Environmental Protection Agency (EPA) lask week proposed a slate of updates to its agricultural Worker Protection Standard.

The enhanced protections come 22 years after the EPA last revised the rules intended to safeguard the nation’s 2 million farmworkers from pesticides’ perils. Among other steps, the new rules would increase the frequency of mandatory pesticide training from every five years to every year, and include no-entry buffer zones to shield workers from spray and fumes.

“EPA’s proposal aims to pull farm workers up toward the same level of protection from environmental and health hazards that other professions have had for decades,” Gina McCarthy, the agency’s administrator, wrote in a blog post, A Step Forward: Protecting America’s Farmworkers.

But the long-overdue update falls short of the more sweeping changes advocates envisioned. It fails, for instance, to require medical monitoring of applicators handling toxic chemicals; sets 16, not 18, as a minimum age for those handling pesticides; and eliminates a requirement that growers display in a central location information on pesticides being applied.

“As expected, there are some genuine improvements, but also at least one big step backward … and some real lost opportunities, especially when it comes to protections for pesticide handlers, and most especially teen pesticide handlers,” Eve C. Gartner, a staff attorney with Earthjustice, wrote The Center for Public Integrity (CPI).

In 2012, CPI explored the EPA’s thin layer of protection for farmworkers, describing how pesticides can endanger laborers, but no one knows the full scope of the environmental perils in the fields.

For instance, Gartner and others note, the proposed rule would ban children under 16 from handling pesticides, with an exemption for family farms. The EPA lauds that first-ever minimum age requirement as a step forward. But farmworkers and their advocates had pushed for the minimum age to be set to 18.

The new age limit “is better than nothing but I don’t see justification for wanting to expose 16- and 17-year-olds,” said Virginia Ruiz, director of occupational and environmental health for Farmworker Justice.“Why you would want somebody that young applying chemicals in the workplace is beyond me.”

Setting the minimum age at 18 would mean higher costs for the industry, the EPA said.

“EPA estimates that requiring handlers to be at least 18 years old would cost about $3.1 million annually, or $11 per agricultural establishment and $320 per commercial pesticide handling establishment per year,” the proposed rule says.

Like others who have long pushed the EPA to revise the Worker Protection Standard, Ruiz is heartened that some substantive changes finally came. But, overall, she called the proposal a “mixed bag.”

Another area advocates question: that the EPA would eliminate a requirement that growers centrally post information about pesticides.

The posting requirement, the EPA said, has become the single most frequently cited area of non-compliance with the Worker Protection Standard. Industry and regulators have challenged it, the agency said.

“Keeping the information current at the central location has been problematic for agricultural employers, as records of frequent pesticide applications on an establishment with multiple crops can be difficult to maintain accurately during the growing season,” the EPA wrote.

“Most workers,” the proposed rules say, “do not routinely pass the central posting area because their workplace is at a different part of the establishment. The proposed change would continue to make available at a designated location pesticide application information for workers and handlers. Rather than continue a requirement that burdens employers without clear benefits to workers and handlers, EPA has decided to revise the requirement.”

To the farmworker community, this is a change for the worse. With a central posting place, they say, farmworkers know there is a spot they can turn for information. But now, they say, the burden will fall on farmworkers—many of them working in the shadows—to actively seek out that information.

“It’s going to be the very rare farmworker who’s going to have the courage to ask for that information,” said Pesticide Safety and Environmental Health Project coordinator Jeannie Economos for the Farmworker Association of Florida.

More than half of the employees at the association, Economos said, are former farmworkers.

The EPA’ rationales for cutting the central posting requirement and putting the minimum age to 16 are both “illuminating and disturbing,” Gartner said.

Farmworkers advocates also pushed the EPA to require medical monitoring of applicators who handle toxic pesticides, following the leads of California and Washington. That is not happening, either.

“Those programs have been around for many years, to much benefit,” said Ruiz. “The fact that they’re in these big agricultural states shows that they are feasible to implement … and are very helpful in helping to prevent overexposure.”

The EPA cites other reforms, producing a before and after primer showing how the rules will change. The specific changes include:

“Today marks an important milestone for the farm workers who plant, tend, and harvest the food that we put on our tables each day,” McCarthy said. “Protecting our nation’s farm workers from pesticide exposure is at the core of EPA’s work to ensure environmental justice.”

The changes, the administrator said, follow “more than a decade of extensive stakeholder input by federal and state partners and from across the agricultural community including farm workers, farmers and industry.”

Economos cites the “good and bad” of the proposed changes, which will now go through a public comment period before becoming final.

“We really want to applaud the EPA for all the work they’ve done on this. We know it’s been a long time in the making,” Economos said. “We’ve been waiting a long time.”