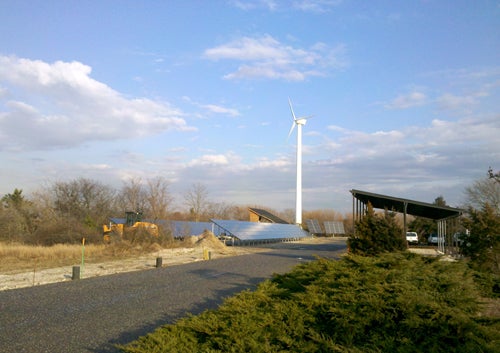 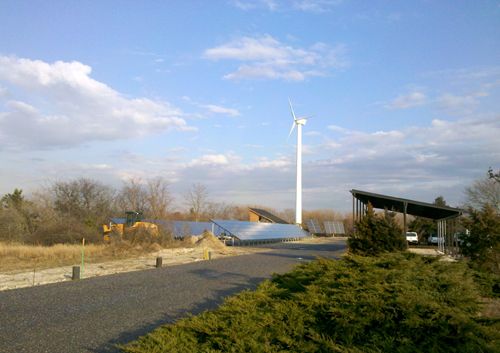 The Town of Hempstead’s energy park.

Question: What do you get when you cross a majestic 100-kilowatt (kW) wind turbine with a hydrogen fueling station, a solar house, a pair of solar trackers (high-tech solar electric panels that follow the sun’s daily path across the sky), a 60-kW solar field, a solar-powered carport and a geothermal energy project?

Answer: A pioneering and unparalleled energy park that will meet the heating and cooling needs of a municipal facility on Long Island while serving as a model for other local governments across the U.S.

The groundbreaking Energy Park is located at the Town of Hempstead’s Conservation and Waterways headquarters in New York.

Settled in 1664, the Town of Hempstead—with a population of approximately 770,000 people—is the most populous township in the U.S. If it were incorporated as a city, it would be the second largest city in New York, ahead of Buffalo and behind New York City.

I live in an unincorporated village within the Town of Hempstead and I’ve eagerly followed the energy park’s evolution and progress, which was underscored by the 100-kW wind turbine that became operational in December. The first time I saw the new turbine, while driving on a nearby parkway, I was delighted beyond words and each time I’ve seen it since it still manages to bring a smile. Even better, within sight of the town’s energy park is the E.F. Barrett Power Station, a fossil fuel-fired relic from the past that has for decades damaged Long Island’s South Shore Estuary from which it withdraws water and returns it at a much higher temperature.

Fortunately, on May 23, I had the pleasure of attending an event hosted by the town to mark a few milestones achieved by the wind turbine. Town Supervisor Kate Murray announced that the wind turbine has generated more than 128,000 kilowatt hours (kWh) in its first 24 weeks. To put the 128,000 kWh into perspective, that’s enough electricity to power 14 Long Island homes for an entire year.

Standing 120 feet tall (excluding the 35-foot blades), the turbine, the Northern Power 100, helps power Long Island’s only hydrogen fueling station, providing electricity to power a water-to-hydrogen conversion process which produces hydrogen fuel. The fuel is stored on site at the fueling station and is utilized by the town’s fleet of fuel-cell vehicles and a hydrogen/compressed natural gas internal combustion engine bus.

“Powered by the winds off Point Lookout, this wind turbine provides an almost constant supply of clean, renewable energy for the town,” explains Murray who received an Environmental Quality Award from the U.S. Environmental Protection Agency (EPA) in April for her leadership and vision on the Energy Park.

According to the EPA, the town “has taken several measures to reduce its energy use while saving its residents money in the process… Supervisor Murray has elevated the Town of Hempstead to a higher environmental standard, promoting sustainability throughout the community and, ultimately, setting an example for others.”

With local residents (and taxpayers) in mind, the town secured a $4.6 million U.S. Department of Energy grant to cover the cost of the wind turbine—estimated at $615,000—and finance the construction of the other components of this unique park. (The park also boasts a neat solar and wind-powered shellfish nursery that we produced a video about a few years ago.)

“The town’s energy park is a model of how local government can provide leadership with clean energy that should be followed by communities across the nation,” says Neal Lewis, executive director of the Sustainability Institute at Molloy College.

“With gridlock on energy policy in our nation’s capital, local governments are taking the lead in retrofitting old buildings, converting vehicle fleets and installing renewable energy systems,” says Lewis, who also coordinates the Long Island Clean Energy Leadership Task Force, which for seven years running has brought together local government officials with environmentalists in order to identify ways that government can lead by example in promoting clean energy. “Among the most active on Long Island are Supervisor Kate Murray and the Town of Hempstead.”

“The Town of Hempstead has been a leader in the pursuit of new, clean ways to generate the energy we use,” noted Michael D. Hervey, chief operating officer of the Long Island Power Authority, which has supported many of the town’s initiatives and provided technical and financial assistance as the town’s investment in its energy park has grown.

I was glad to see that New York City is taking note. At the May 23 event, I was introduced to a New York City Department of Sanitation energy manager who was on hand to see what ideas he might be able to apply in the Big Apple. Like the rest of us, he left inspired.