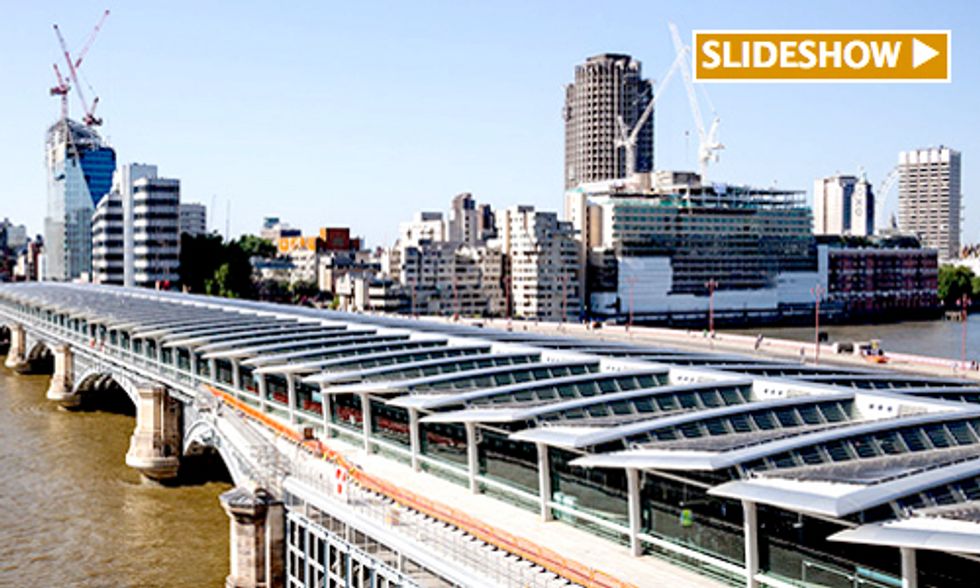 The world's largest solar-powered bridge was unveiled to commuters this morning in London, England.

Half of the energy for Blackfriars Station is now produced by 4,400 photovoltaic panels covering Blackfriars Bridge, which sits atop the River Thames, according to Network Rail, First Capital Connect and Solarcentury, which have been working on the project for about five years.

"Electric trains are already the greenest form of public transport—this roof gives our passengers an even more sustainable journey," David Statham, managing director of First Capital Connect, said. "The distinctive roof has also turned our station into an iconic landmark visible for miles along the River Thames."

First Capital Connect expects the panels to cut the station's carbon emissions by 511 tons a year, or the equivalent of 89,000 car trips. further reducing the carbon footprint of its train routes to the south east of England.

Frans van den Heuvel, CEO of Solarcentury, which installed the panels, called the solar bridge one of the "most complex of engineering projects," but said that it shows that solar can be deployed just about anywhere.

"We had different sections of roof available at different times to fit in with this complicated jigsaw of getting everything up and going," said Gavin Roberts, Solarcentury's senior project manager.

The solar array was part of a larger remodeling project at the station, which includes a new entrance on the south bank of the Thames, four new platforms and a redeveloped underground station.

“The dramatic transformation of Blackfriars station from a small and cramped station to a modern landmark is typical of how we are enhancing one of Europe’s busiest rail routes—using smart, sustainable technology to reduce the cost of running the railway at the same time as giving passengers the longer, more frequent trains that are so desperately needed,” Simon Kirby, managing director of Network Rail infrastructure projects, said.