Logging in the Congo Exacerbates Poverty and Leads to Social Conflicts 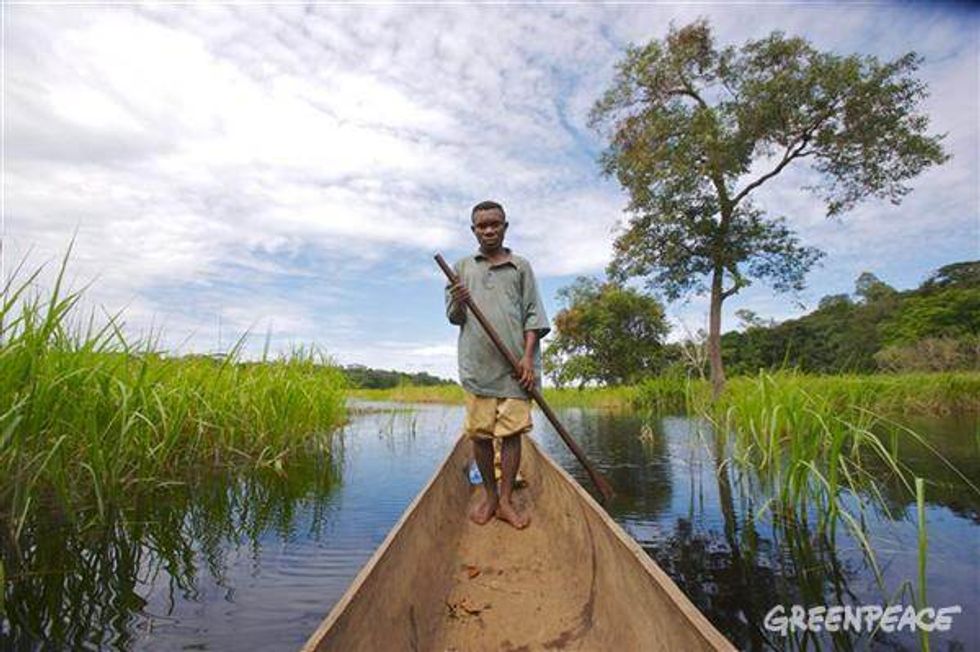 Alfonse Muhindo and Silas Siakor have traveled all the way to Washington, D.C. from the forests of the Democratic Republic of Congo and Liberia. Walking into the enormous atrium of the World Bank, filled with glass and light and a fountain in the center sending endless water flowing down the walls, the visitors are then greeted by big, shiny letters on the wall of the entrance hall—“Our dream is a world without poverty."

Ten years ago, the World Bank initiated a reform of the forest sector in the Democratic Republic of Congo. The country was in shambles, after years of war, with a dysfunctional government and war still raging in the east of the country. The Congo, a country almost the size of Western Europe, has the second largest rainforest in the world. Most of the vast, low land rainforests are still intact. Forty million people depend on the forests for their livelihoods. It provides food, building materials, energy, medicines and more.

We are joined by my friend Reiner Tegtmeyer, from the organization Global Witness who is attending this World Bank event to screen a film from his visits to 67 local communities affected by logging in the Congo, trying to find out what has changed after almost ten years of World Bank sponsored reform. The results he presents in the film are sobering. “They take our trees without leaving anything," an angry man says into the camera. A woman adds, “There have been no positive impacts, only disorder."

Tegtmeyer informs the audience, "We have tons of this material, this is only a snapshot.”

Another woman in the film recalls her village’s worst nightmare, describing security forces—including police—called in by a Liechtenstein-based logging company who raided the place and raped women, including minors. “They even raped a pregnant woman and left her to die," she says. That was in 2006. The children of these crimes have been born in the meantime, but the victims have never seen justice.

This year it happened again, in another area controlled by SIFORCO, a subsidiary of Swiss group Danzer. Villagers were fed up with the broken promises and seized some equipment from the company in order to get them to the negotiation table. In a mission of brutal retaliation, security forces came to the loggers’ assistance, raped women and girls, beat people up and destroyed property. Sixteen people were arrested by police and deported to prison. Company equipment and money was used to help facilitate the crack-down. Siforco is currently preparing for an eco-label certification with the help of the German development bank KfW.

I ask the bank’s senior forest advisor who joined us for the screening, "After ten years of successful World Bank intervention, why are the rights of local communities still being trampled on?" Four years ago, Greenpeace produced a film that has a striking resemblance to the images Tegtmeyer is showing us today. What happened to all that money that was supposed to improve governance and bring transparency and sustainability to the logging industry?

The DRC is not the only and not the first country where the World Bank has been pushing logging reform programs, and there are important lessons to be learned from the past. This is why I focus my presentation on Cameroon, the pioneer of forest reform where a new forest law was introduced already in 1994. The World Bank was instrumental in bringing it about, and hailed it as Africa’s most progressive forest law. The World Bank pushed through changes in the tax regime in order to increase revenues from logging, and a requirement for companies to have an approved management plan for their cutting operations. A regulation to enable community forests was also added. Seventeen years later, it is obvious that the model has failed.

Recent studies are showing that, even if the theory of sustainable management was working—which it isn’t—there is nothing sustainable about it. In fact, it will be only a matter of time until the ancient trees will be gone forever from Cameroon’s sustainably logged forests. Communities in and around logging concessions in Cameroon are still impoverished. The revenues are not reaching them. But the World Bank set out to copy and paste the Cameroonian model in the DRC, despite our warnings.

Gerhard Dieterle has been working in the World Bank’s forest department for many years. He admits that “looking at these pictures is depressing, undeniably deplorable." He agrees that more needs to be done to support community forests and local management. He is personally involved in a couple of small new initiatives at the World Bank with the aim of strengthening local control in the forest sector and supporting indigenous peoples.

“We have learned a lot," he concedes. However, as long as the mainstream operations of the World Bank continue to focus on support for large scale logging concessions, and continue to ignore the needs of local communities and indigenous peoples, these little initiatives on the side remain a drop in the ocean—a fig leaf exercise.

Alfonse from the DRC has a clear message to the World Bank—Change your strategy and shift your support to programs that strengthen and benefit poor local communities. He and the members of his network have started to take things into their own hands. Congolese civil society groups are drafting legislation to regulate the informal logging and charcoal sector, which provide millions of poor with income, but is in desperate need of clear and equitable regulation. They have also started an initiative to measure and improve transparency in the forest sector together with international partners. And they are working hard to finally provide a legal basis for communities to manage their own forests—A national community forest law has been drafted with the help of civil society. It is sitting on the desk of the prime minister, ready to be signed. It would, for the first time, put local communities—at least legally—on equal footing with loggers.

“The World Bank needs to use its influence and get our government to sign this law," Alfonse said. Indeed, the World Bank has proven that it has the power to push through all kinds of conditions in its poor client countries—if it chooses to do so. If World Bankers are serious about helping the poor, they will simply not release any further funds to forest programs unless the government passes a law on community forests. It would be a small step for the World Bank, but a big leap forward for the people of the Congo forest.