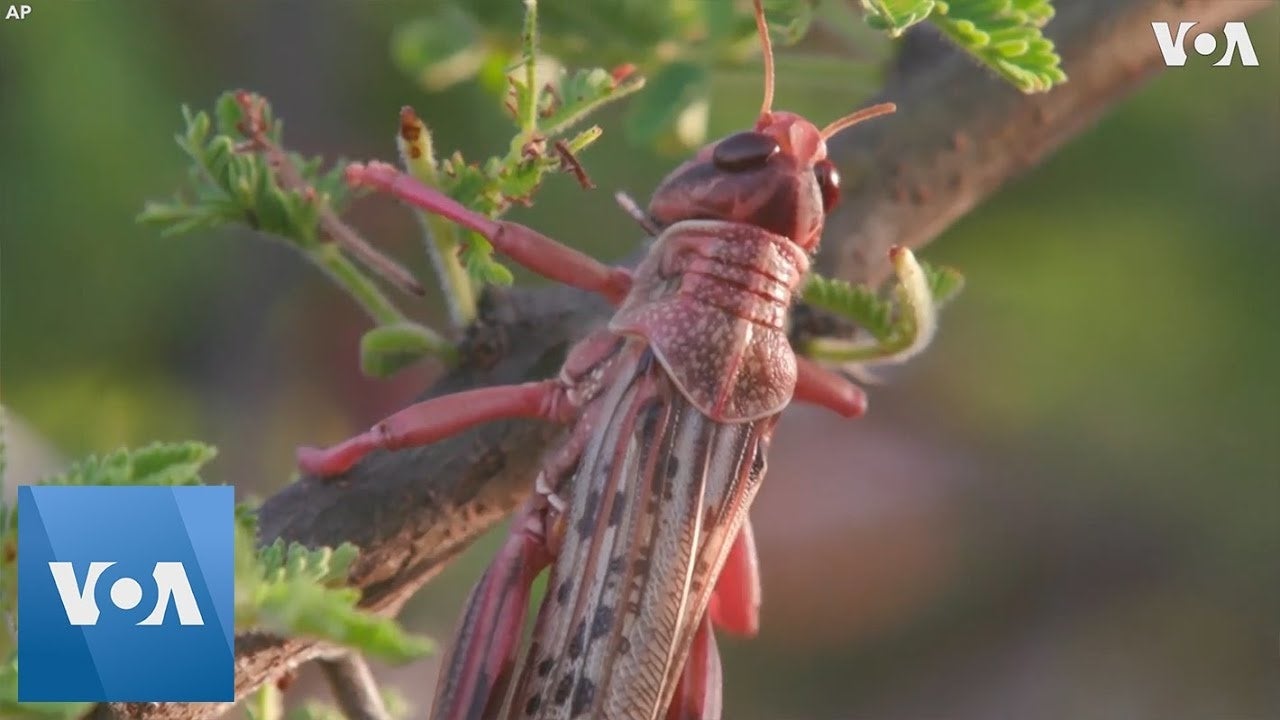 While much of the world focuses on the coronavirus pandemic that has infected more than 1.6 million people across the globe, East Africa is battling the worst invasion of desert locusts in decades — a months-long “scourge of biblical proportions” that experts warn could get worse with a larger second wave already arriving in parts of the region.

The Food and Agriculture Organization (FAO) of the United Nations, which is shepherding the global response to the region’s locust crisis, “estimates that locust numbers could grow another 20 times during the upcoming rainy season unless control activities are stepped up,” U.N. News reported Thursday.

The current situation in East Africa remains extremely alarming as hopper bands and an increasing number of new swarms form in northern and central Kenya, southern Ethiopia, and Somalia. This represents an unprecedented threat to food security and livelihoods because it coincides with the beginning of the long rains and the planting season. Although ground and aerial control operations are in progress, widespread rains that fell in late March will allow the new swarms to mostly remain, mature and lay eggs while a few swarms could move from Kenya to Uganda, South Sudan and Ethiopia. During May, the eggs will hatch into hopper bands that will form new swarms in late June and July, which coincides with the start of the harvest.

The massive swarms, as Common Dreams has reported, are partly fueled by the climate crisis and have affected Djibouti, the Democratic Republic of Congo, Eritrea, Kenya, Ethiopia, Somalia, South Sudan, Tanzania and Uganda. The pests have also been spotted in Yemen, Saudi Arabia, Qatar, Bahrain, Kuwait, Iran, Pakistan and India.

The main method of battling locust swarms — which each can devour enough food to feed 35,000 people in a day — is the spraying of pesticides. Concerns are mounting that locust eradication efforts in the region will be increasingly hampered by pandemic-related travel restrictions and supplies problems.

“Parts of Africa were already threatened by another kind of plague, the biggest locust outbreak some countries had seen in 70 years.

“Now the second wave of the voracious insects, some 20 times the size of the first, is arriving.” https://t.co/tsaWoSbNEi

“Suppliers of motorized sprayers and pesticides are facing major challenges with limited airfreight options to facilitate delivery,” Cyril Ferrand, FAO’s resilience team leader for East Africa, told EARTHER on March 30. “Purchased orders were placed [a] few weeks ago and pesticides expected last week in Kenya have been delayed by 10 days.”

Ferrand said in a statement Thursday that “there is no significant slowdown” in efforts to stop the swarms across the region so far “because all the affected countries working with FAO consider desert locusts a national priority.”

“While lockdown is becoming a reality, people engaged in the fight against the upsurge are still allowed to conduct surveillance, and air and ground control operations,” he said. “The biggest challenge we are facing at the moment is the supply of pesticides and we have delays because global air freight has been reduced significantly.”

“Our absolute priority is to prevent a breakdown in pesticide stocks in each country,” Ferrand added. “That would be dramatic for rural populations whose livelihoods and food security depend on the success of our control campaign.”

The fight against desert locusts in East Africa goes on despite #COVID19 restrictions, @UN's @FAOnews says, the agency leading the effort to defeat hunger.https://t.co/oHSvDgTXKP

FAO has secured about 1.1 million of the 3.2 million it has requested to tackle the locust crisis and is supporting surveillance and pesticide application in 10 nations.

The U.N. agency continues to raise concerns about how locusts could impact the collective 20 million people already enduring food insecurity in Ethiopia, Kenya, Somalia, South Sudan, Uganda and Tanzania — as well as an additional 15 million people in war-torn Yemen.

This is the worst locust invasion that Kenya has seen in 70 years. Quartz Africa reported Friday on current conditions in the country, where hoppers have been maturing into adults over the past month after hatching in February and early March:

These swarms are still immature, and take up to four weeks before they are ready to lay eggs. Kenya is more than halfway through this maturation cycle, and the new generation of locust swarms are expected to begin laying eggs within the week.
In Kenya, the locust maturation is coinciding with the onset of the rainy season. Farmers have been sowing crops of maize, beans, sorghum, barley, and millet during March and April, in hopes that a favorable rainy season will allow for abundant growth during late April and May. With the locust swarms gaining size and strength, experts fear that up to 100% of farmers’ budding crops could be consumed, leaving some communities with nothing to harvest.

“The concern at the moment is that the desert locust will eat under-emerging plants,” Ferrand told Quartz. “This very soft, green material, biomass leaves, rangeland, is, of course, the favorite food for the desert locusts.”

As for the coronavirus pandemic that first emerged in China late last year, Africa has reported 562 deaths and nearly 11,000 COVID-19 cases, according to Al Jazeera, which are relatively low figures compared with other affected regions. However, the U.N.’s World Health Organization (WHO) is warning that some African nations could see a significant spike in cases in the coming weeks.

“During the last four days, we can see that the numbers have already doubled,” Michel Yao, the WHO Africa program manager for emergency response, said Thursday. “If the trend continues, and also learning from what happened in China and in Europe, some countries may face a huge peak very soon.”

As Ferrand said in his March conversation with EARTHER: “How do we respond to the needs of the European countries and North American countries as well as the humanitarian and development assistance that is still so necessary in the continent of Africa? … This is the challenge that we will have to face in 2020.”