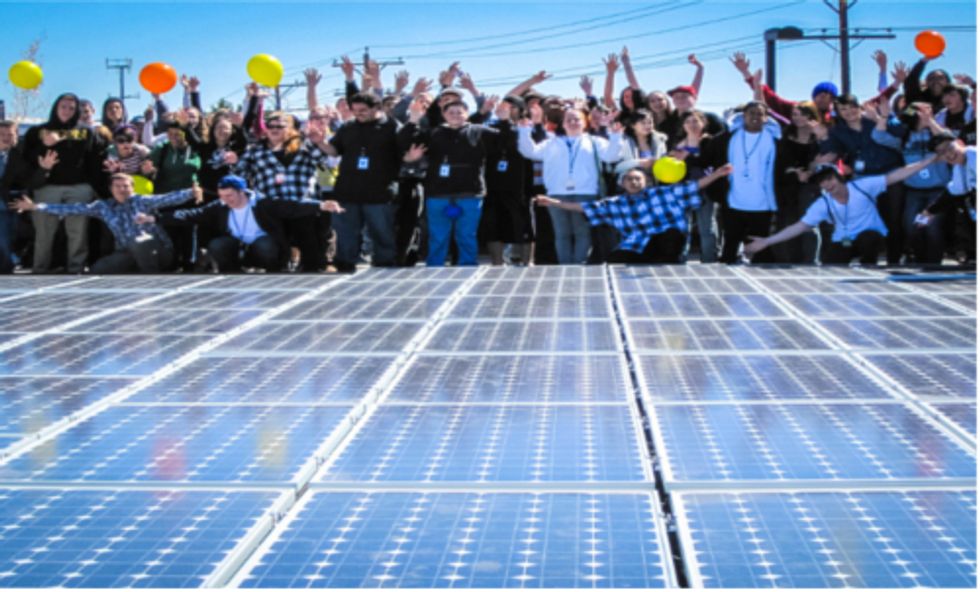 Solar and wind projects can pay off for communities in more ways than just reducing carbon pollution, says a new report from the Washington D.C./Minneapolis-based Institute for Local Self-Reliance.

“Giving up ownership means giving up a big share of the profits of going solar, and it may mean more expensive solar for society,” said lead author John Farrell, director of ILSR’s Democratic Energy initiative.

The report explains how that rather than just opposing big utilities who want to build transmission lines to keep control of the energy—and costs—citizens can keep control in their own hands through local renewable energy ownership. It shows that the return to the community in jobs and economic impact is far greater than with absentee ownership of renewable energy.

"The economic self-interest motivates rapid expansion of renewable energy and builds political support for a low-carbon, more local and economically rewarding energy system," it says. "This report serves as a resource, especially for communities facing the possibility of big out-of-state projects like high-voltage transmission lines."

It also found that local ownership increases overall support for renewable energy and lessens community resistance to such projects. For instance, it found that citizen attitudes toward wind power in two German towns improved dramatically with local ownership. The percentage viewing it positively increased to almost 50 percent from less than 20 percent when the energy resource is not local and negative attitudes shrank to less than 15 percent from nearly 60 percent.

"Local ownership also helps build political support for renewable energy by reducing resistance and building a constituency to support expansion of renewable energy production.," says the report. "Many wind power projects have come under fire from nearby residents in the United States, often claiming ill health effects from the turbine noise or shadow. It's not that people are made physically ill by new renewable energy projects. Rather, they are sick and tired of seeing the economic benefits of their local wind and sun leaving their community."

The report pointed out the challenges to local ownership: the tradition of a centralized electrical grid, the resistance of utilities reluctant to cede control, financial issues including raising capital and complicated cash flow and the ineligibility of the most logical entities for local control—cooperatives or nonprofits—for many tax incentives primarily accessible only to large, wealthy corporations.

It proposed a series of policy solutions for these issues, including removing some of the financial barriers, providing incentives for locally owned projects, changes in the current tax code to allow smaller entities to benefit, simplifying organizational structures and virtual net metering to allow many customers in a community to share electricity output.

Bringing local ownership into the picture will increase pressure for those political fixes, the report asserts.