Earlier this month, we took a deep, data-driven dive into the state of food and farming across the U.S. with the release of our 50-State Food System Scorecard. Although the country as a whole isn’t exactly the poster child for healthy and sustainable food systems (far from it), there’s a lot of variability in what’s happening at farms, grocery stores and dinner tables from one state to the next—and we’re here to learn from it.

Of course, we couldn’t assess the food system without taking a good, hard look at how it impacts its end users: us. The map below shows how states stack up when it comes to diet and health outcomes.

But our food system is complex, and understanding how all of its various parts are connected—for example, mathematically demonstrating how a diet-related disease like hypertension might be linked to something like land use—isn’t easy. There are a lot of factors that influence what, how, and why we eat what we do, and the path from farm to fork is long and winding. Meaning that what a state’s farmers are doing doesn’t seem likely to strongly drive the state’s diet-related health outcomes. But being part of the same system, these two things do have a relationship (status: it’s complicated), and the wide array of data we’ve analyzed just might help us see it more clearly. 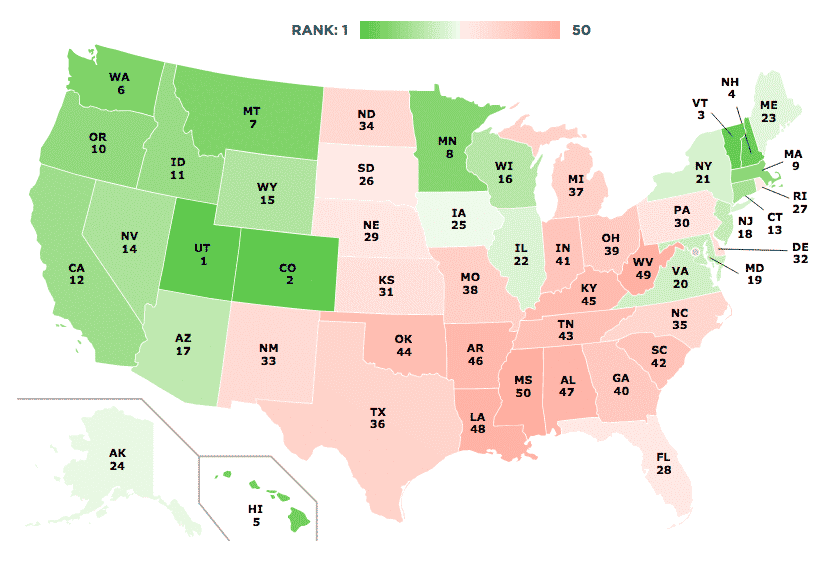 For the most part, we wouldn’t expect to see a strong relationship between the types of food a state produces and the types of food its population consumes—much less any diet-related health outcomes. As I mentioned, there are a lot of things that factor into our dietary decisions, and dozens more that determine how they’ll impact our health in the long run. Plus, much of the food produced in any given state usually doesn’t stay there for long. Take the state of Washington, for example. It produces about 6.7 billion pounds of apples per year—nearly 20 billion apples. That’s enough for every adult, child, and infant in the whole state to eat an apple for breakfast, lunch, and dinner six days out of the week. (Fun to picture, but definitely not happening.) Instead, Washington exports nearly a third of its apples to countries around the world and ships a whole lot more to other states nationwide.

Could local food be changing the game?

However, the local food movement is making small shifts in the way our food system works. There are now nearly 9,000 farmers markets in the US, and facilities like food hubs and cooperatives are making it easier for farmers to join forces to supply food to local institutions like schools, hospitals, and universities. What’s more, many federal programs are working to help make these foods more affordable and accessible to everyone. Many markets now accept benefits from nutrition programs like SNAP or WIC, often offering incentives for fresh fruit and vegetable purchases. In addition to being good for farmers and low-income families, these programs offer data that can help us better understand the connections between farm, food and health.

As I mentioned, we wouldn’t necessarily expect food production and diet-related health outcomes to be strongly related, especially at the scale we looked at. (We call this relationship “correlation,” and a stronger correlation means two variables are more strongly related. And as any good statistician will tell you, correlation does not imply causation.) Data we evaluated from all 50 states show that these variables display some correlation, but it’s nothing to write home about.*

However, when you look at food production, food investments, and local food infrastructure together, it turns out that they’re much more strongly correlated to diet and health outcomes than food production alone. Meaning, when you take into account what a state grows, along with things like food hubs, farmers markets, and investments of federal funds to get more healthy food onto people’s plates, you start to see a clearer connection to diet and health outcomes in that state. Could this mean that the local food movement may meet some of the lofty expectations we’ve set for it, like improving public health by getting more fresh produce to people?

We shouldn’t get ahead of ourselves—it’s possible, and likely, that there’s another variable we didn’t look at that could be partly responsible for driving both. (This is typically called a “confounding variable.” See the classic example of murder rates and ice cream sales for a good explainer of this term.) In our case, a confounding variable could be something like the effectiveness of a state’s government—a well-resourced and high-functioning state government could potentially contribute to higher rankings for all the variables in question.

But it’s worth a second look. Scorecard aside, we’ve heard plenty of anecdotes that suggest these local food programs are working for farmers and families, and there’s a growing amount of evidence to back them up. And intuitively, it makes some sense that achieving better diets and health would require both a healthier food supply and the means to get that food to the people who need it most. Is local food a silver bullet? Definitely not. But if we’re ever going to achieve a food system that is truly sustainable, equitable, and health-promoting, investments in local and regional food systems and in healthy food access will likely be at least one piece of the puzzle.

Say, what else connects farming to food and health?

You guessed it—the farm bill. If you’ve followed this year’s reauthorization of this massive piece of food and farm legislation, you might know that it includes everything from agriculture research that helps farmers to nutrition programs like SNAP (the largest nutrition assistance program, with a correspondingly large target on its back). But it also includes a lot of “tiny but mighty” programs that could help connect the dots between healthy food production and healthy populations.

The ideologically motivated House farm bill, which would heap additional work requirements onto SNAP participants and would reduce or eliminate benefits for millions, passed on June 21—and leaves many of these small local food programs in the dust. The Senate bill passed a week later and, by contrast, makes much-needed investments in a range of science-based food and farm programs. In addition to maintaining the core function and structure of SNAP, the Senate bill also includes many of the local food infrastructure programs that factored into our food system scorecard—like the Food Insecurity Nutrition Incentive program (FINI), the Healthy Food Financing Initiative (HFFI), the Farmers Market and Local Food Promotion Program (as part of the newly created Local Agriculture Marketing Program), and more.

Want to see these programs fully funded in the next farm bill? So do we.

House and Senate negotiators are likely to begin meeting this month to try to merge these two drastically different bills into one that everyone can live with. That process will be challenging, and it will need to be informed by people like you.

If you’re as invested as we are in the future of our food and farming systems, now is the time to act. Sign our petition to House and Senate negotiators today.

Sarah Reinhardt is the food systems and health analyst for the Food & Environment program at the Union of Concerned Scientists.