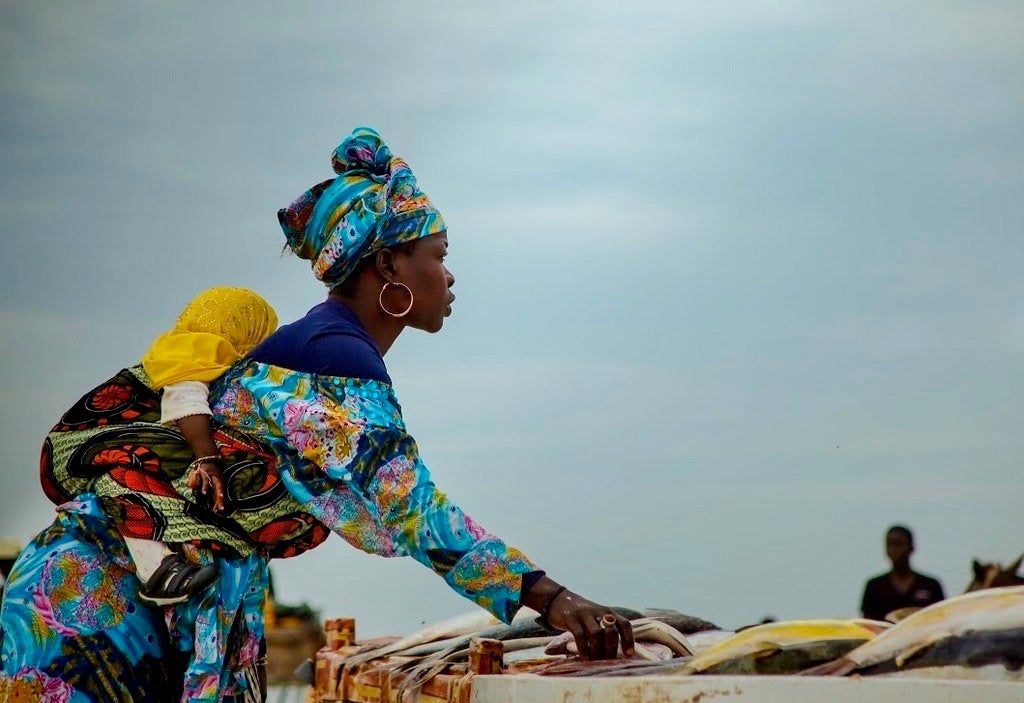 Innovation is happening in the crowded suburb of Dakar, and women are at the forefront of it all. Bioversity International / Flickr / CC BY-NC-ND 2.0

Flying along the coast in Senegal, it’s impossible not to notice thousands of dots below in the water. These are large, planked fishing canoes, the product of centuries of design and tradition, and a vital part of the local economy.

When the fishing crews come home, Senegalese beaches come alive with activity. Women sort the catch and prepare it for sale in the local market or sell it to wholesalers who may put it on a truck to Dakar, the country’s capital. Young people sell drinks or help beach the canoes while others drive carts to carry fish to markets.

The canoes and fishing activities are only a small part of a large chain that begins with boat-building and net-making and ends with marketing and consumption of the catch, often in towns far away.

These types of local fishery economies occur the world over but have often been overlooked or not well understood by policy makers when considering priorities for coastal towns and regions. Yet increasingly, international studies are focusing on local and traditional fisheries and the value they bring to their communities. In many countries, artisanal or small-scale fisheries represent most of the people working in fisheries, and in many developing countries they provide nearly half of the fish caught for human consumption.

We are a research team that includes a scientist, who studies how people in fishing communities solve problems together, and a policy expert, who works with national governments to support local fisheries.

During the two decades we’ve worked with tropical fisheries, our experience and the wider field of research has shown that small-scale fisheries are central to solving many problems in the oceans, such as overfishing or loss of natural habitats, as well as on land by addressing poverty and hunger in places where jobs and quality nutrition are limited.

A Deep Connection to the Ocean

In 2012, researchers from the World Bank, UN Food and Agriculture Organization, and the research organization WorldFish published a report entitled “Hidden Harvests,” which provided admittedly rough first estimates that small-scale fisheries take 38% of the total fish catch from the ocean and, when inland waters are included, almost half of the global fish catch.

According to this report, these small-scale fisheries could account for more than 90% of the world’s commercial fishers, processors, and other people employed along the value chain — roughly 108 million people.

This would make small scale fisheries the ocean’s largest employer — greater than oil and gas, shipping and tourism combined. We suggest that because these small-scale fisheries are often found in coastal waters with high biodiversity but outside formally protected areas, fishers can and have served as traditional stewards of these ecosystems. They are often the first to know when changes occur, such as the effects of the changing climate.

While these diverse contributions to society are significant, they are often not considered or appreciated in policy decisions affecting fisheries and fishing communities.

Small scale fisheries are also estimated to provide more than half the animal protein intake in many of the least developed countries. Beyond this contribution, research shows that the micronutrients, vitamins and minerals, that fish provide are far more important than the protein itself.

Despite their importance to societies around the world, small-scale fisheries are often marginalized from power and decision-making processes.

For example, in Mexico, on the Baja California Peninsula of the Pacific Ocean, members of the fishing cooperative of Punta Lobos rise at daybreak as they have for two generations to fish for tuna and other finfish. Fishermen defy the six-foot waves and launch their boats from the beach in a collective effort.

Increasingly, the Punta Lobos fishers near the touristic town of Todos Santos are struggling to retain access to the beach against encroaching hotel and residential development. The concessions fishermen have made so far have enabled them to keep developers from limiting and closing access to their source of livelihoods, but this may change with future development pressure, if other fishing cooperatives that have lost access are an indicator.

The ‘Hidden’ Power of Local Fisheries

Governments around the world are beginning to recognize the unique and shared characteristics of small-scale fisheries and the challenges they face. In 2014, they agreed to international policy guidelines written specifically to protect them. These guidelines commit governments to recognizing and securing access of small-scale fisheries to ocean resources and coasts in the face of competing interests and, above all, to protect and respect the rights of people to earn a living and feed themselves and their families.

Still, all too often, small scale fisheries are effectively “hidden” from policy makers and researchers. Despite increased attention and study in recent years, there is a great deal that we don’t know. The amount of fish caught by small-scale fisheries worldwide is not consistently monitored, and it is not well understood how many jobs that fish catch provides, such as building and repairing boats, or processing and selling the catch. Another important question is the strength of the safety net that fishing creates for those who need to fall back on this work.

This may sound absurd in an age when we can track fishing activities via satellite. But typically, small-scale fisheries are not well documented because they are neither taxed nor monitored by the government, they are not counted in official statistics, or they are counted but mixed together with larger, industrial fisheries.

We are part of an international effort — led by the UN Food and Agriculture Organization and WorldFish — that is working to update and expand the 2012 report in a new global assessment of small-scale fisheries. The assessment, being compiled by researchers in more than 45 countries, will provide policymakers with the best data possible about small-scale fisheries and their diverse contributions to society, and why they should be a high priority in decision making.

If policymakers can empower small-scale fishers and their communities to secure their fishing grounds and diverse uses of the ocean, it could represent a sea change for the environment and the people who depend on fishing. Elevating the importance of this sector can contribute to the universal goals of good jobs and income to help reduce poverty and increase the supply of nutritious foods to communities suffering from hunger and malnutrition.