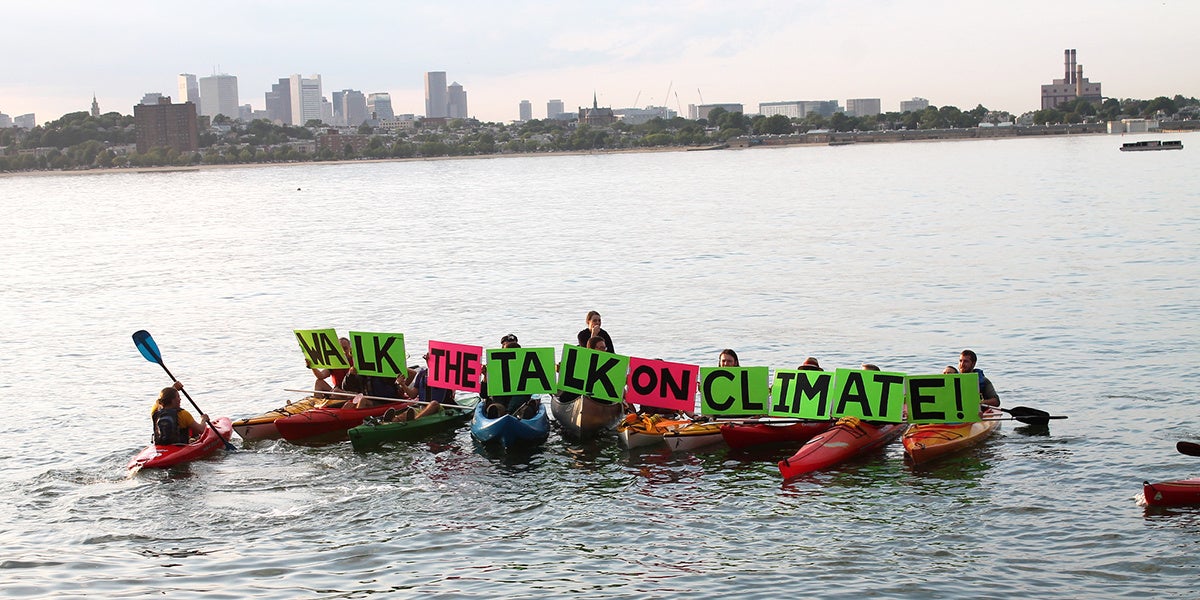 Yes, yes—it can feel daunting. The climate crisis is more urgent than it’s ever been. Some days we feel like we’re making good progress, when we hear of countries powered by 100 percent renewable energy or a big commitment to take on fossil fuel corporations from a city like New York. But other days, it’s a heavy burden knowing there’s so much more that needs to be done to unseat the fossil fuel industry and move to a just, Fossil Free, renewably-powered world.

Last weekend, we saw how national and international leadership keeps failing to meaningfully address the problem. While the Paris agreement rightly acknowledged how much damage we’ll see in a 2-degree warmer world, it’s not clear that process is going to be enough to stop it from happening.

So people are trying something new. The We Are Still In coalition in the U.S. unites local governments, businesses, civil society and non-state actors to work together and overcome limited national means. In the international C40 Cities network, mayors of iconic cities around the globe are pushing for fossil fuel divestment. Gov. Jerry Brown of California is hosting a summit in San Francisco in September to bypass the national and “take ambition to the next level.” And of course, grassroots movements, from Kenya to the Philippines to Brazil, are securing important wins.

All these local efforts—and so many others of varying form and size across the globe—give us hope. People power is keeping us in the game. By speaking truth to power and working tirelessly in our communities and with local governments, we can create the change we want to see. We’re not falling for empty words. We know the solutions are simple: ambitious and just renewable commitments, “no” to all new fossil fuel projects, and an end to finance for the fossil fuel industry.

So, don’t get discouraged. Here’s what you can do right now for an injection of hope:

1. Start or Join a Fossil Free Group Near You

Often, we only catch the headlines—but behind the scenes, groups of people are learning together how to effect real change in their communities with targeted, local campaigns. Start here—and check out some of the amazing tools and the network of groups already out there to help you get started.

2. Join or Organize a Local Rise for Climate Action Where You Live on September 8

Ahead of the Global Climate Action Summit in San Francisco, the climate movement is gearing up for a huge day of action. With 3 months still to go, 100 actions around the world are already organized—but we know we can scale it to more than 1,000. This is a chance to get creative and come together with friends and your community: All you need to know is here.

3. Spread the Word About #RiseforClimate on Social Media

Don’t underestimate the power of keeping the conversation going, sharing personal stories and amplifying other inspiring voices from around the world. Find sample graphics, video, text and lots more to help you spread the word here. And if you’re in California, join the in-person mass mobilization.