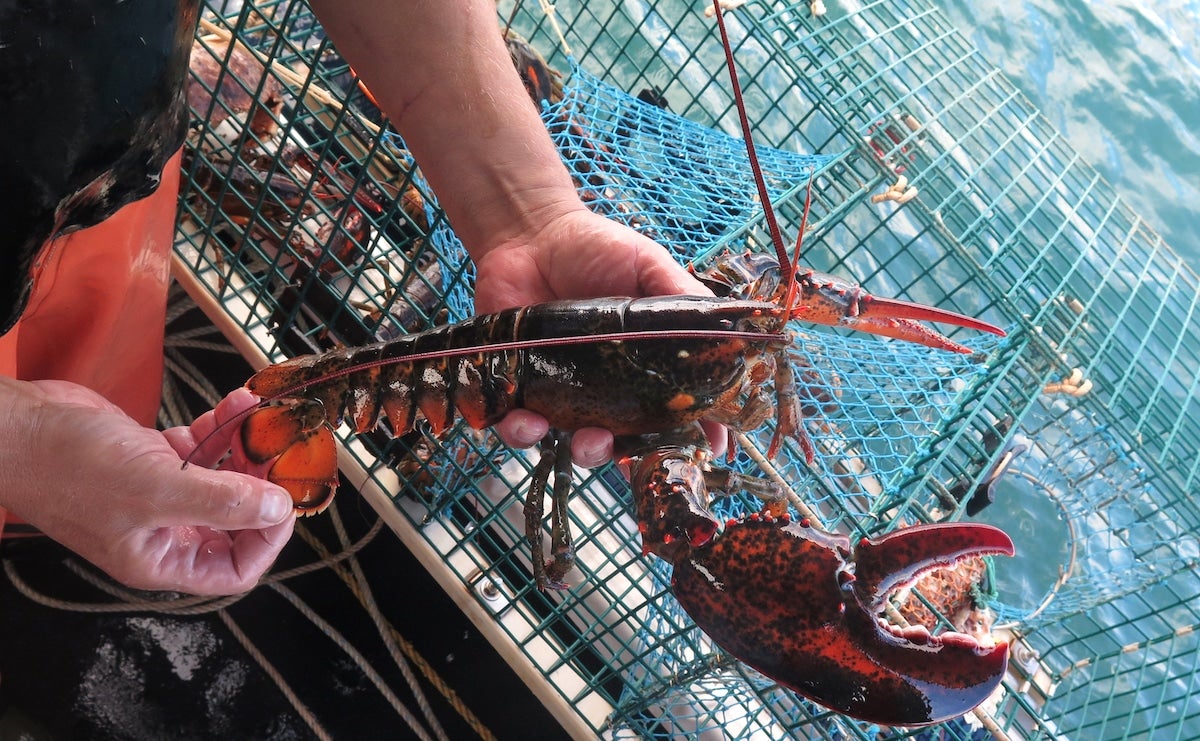 If you want to eat only sustainable seafood, American lobster (Homarus americanus) is now off the menu.

The Monterey Bay Aquarium’s influential consumer and retail guide Seafood Watch has added the crimson crustaceans to its “Red List” of seafoods to avoid because of the dangers that lobster pots pose to critically endangered North Atlantic right whales (Eubalaena glacialis).

Since 2017, North Atlantic right whales are in the midst of what the National Oceanic and Atmospheric Administration (NOAA) calls an Unusual Mortality Event (UME). So far, a total of 34 whales have been confirmed dead, and the two main causes of death are entanglement in fishing gear or vessel strikes. Further, 20 whales have been seriously injured, which means they were alive when they were spotted but were likely to die from their wounds.

At the same time, the whales’ reproductive rates have declined, in part because the climate crisis relocated their chief food source around 2010, causing them to lose weight from lack of food and then to follow their food into less protected waters. In the last decade, their numbers have shrunk by 28 percent and there are now fewer than 340 whales left and only 80 breeding females, The Guardian reported.

Catching lobsters and other animals by pot or gillnet can end up hurting the whales because the ropes from the pots and nets dig into their skin and make it harder for them to fish or swim. Yet the whales must swim a gauntlet of more than one million vertical lines from pots or traps as they migrate from their calving grounds in Florida to their feeding grounds in Canada.

“Every vertical fishing line and gillnet is a threat to the remaining whales, which face the risk of entanglement every day,” Oceana campaign director Gib Brogan said in a statement.

The new Seafood Watch listing, updated September 6, applies to all lobsters caught by pot or gillnet along the whales’ route. It also includes more than a dozen fisheries that use pots or gillnets, including the Jonah crab fishery, according to Oceana.

Seafood Watch’s listings have the potential to make a difference because Whole Foods, HelloFresh, Blue Apron and more than 25,000 grocery stores, food distribution services and restaurants have promised to follow its advice and avoid red-listed fisheries. When it added Louisiana-caught shrimp to its list of foods to avoid because the fishery posed a risk to sea turtles, the fishery successfully lobbied for better state protections in order to get off the list again.

In response to the latest round of listings, HelloFresh said it would now avoid American lobster.

The lobster industry pushed back against the watchdog group’s recommendation.

“Lobster is one of the most sustainable fisheries in the world due to the effective stewardship practices handed down through generations of lobstermen. These include strict protections for both the lobster resource and right whales,” Maine Lobstermen’s Association executive director Patrice McCarron said, as AP News reported.

However, Oceana said that the fishery would only be truly sustainable if the federal government improved protections for North Atlantic right whales. The conservation group recommended publicly tracking fishing vessels, pausing fishing in areas when whales are present and moving from traps and gillnets to alternatives like ropeless gear.

“It’s unfortunate that the government’s failure to update the safeguards to protect North Atlantic right whales is having such serious consequences on these fisheries,” Brogan said in a statement. “Both fisheries and whales can thrive if the National Marine Fisheries Service takes immediate action and creates effective measures for these whales. Ordering lobster or crab should not mean jeopardizing the future of critically endangered North Atlantic right whales — the National Marine Fisheries Service has delayed stronger protections for long enough. It’s time to update the rules.”