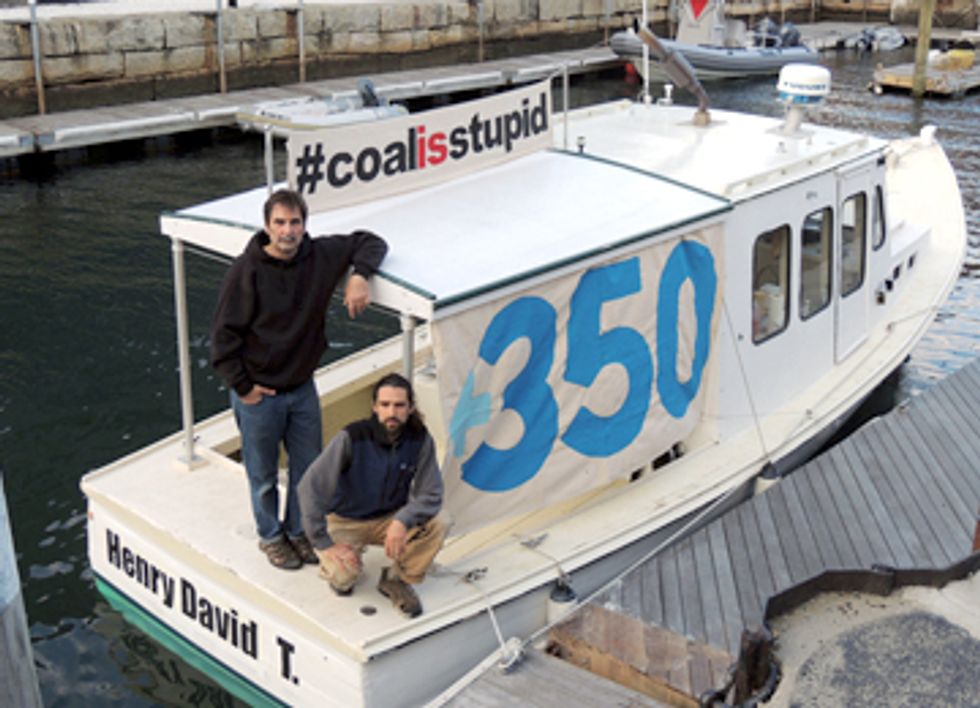 The reality that my nearly 20 years of climate activism has taken a dramatically different tack was crystallized in an instant with the metallic sound of a rifle being chambered. My friend, Jay O'Hara, and I had anchored our 32-foot, Beale Island lobster boat, the Henry David T., off Brayton Point power plant in Somerset, MA, with the intention of blocking delivery by the Energy Enterprise coal cargo ship.

Shortly after anchoring in a dredged ship channel off the Brayton Point pier, I called the local police to let them know where we were and to emphasize that our protest was peaceful. The police told us that they didn't see any concerns, so long as we weren't too close to the power plant. I indicated that might be a problem.

The Energy Enterprise is classified as a self unloading coal cargo ship, measuring 689 feet in length and carrying 40,000 tons of coal. The ship runs a circuit between Brayton Point and Hampton Roads, VA, the largest coal export port in the world, through which most West Virginia coal is shipped.

The captain of the Energy Enterprise called us on the radio shortly after we spoke to the police. He said the ship was carrying American coal from West Virginia, and he didn't understand what we were protesting. After Jay explained that burning domestic coal was as much a problem as imported coal, the captain said he would call the Coast Guard, and shortly thereafter, several high speed Coast Guard vessels arrived. Our boat was boarded by three guards, who questioned us about the seaworthiness of our boat and conducted a safety inspection.

Ken Ward, a handyman from Jamaica Plain, MA, and Jay O'Hara, a sailmaker from Pocasett, MA, aboard the Henry David T.

We were informed that continuing at anchor would be considered a violation of federal navigation regulations, and we were asked to move the vessel or be hit with a $40,000 per day fine. After considering the matter, we agreed to move. Having moored the Henry David T. with a 200 lb. mushroom anchor, however, it was not easy to comply. Jay and I tried a variety of approaches—manhandling the anchor chain by brute force, improvising levers and line pulleys, to no avail. After several hours of work, we got on the phone and were able to find a salvage barge in the area which, for a fee of $1,600, hauled up our anchor.

The Coast Guard issued us a warning for failure to have a fog horn aboard, and we do not know what action may be taken by federal, state or local governments, but understand that discussions are underway.

Brayton Point power plant owner Dominion Energy, after investing nearly $1.5 billion in upgrading the plant over the last six years, has announced its sale to Energy Capital Partners, a private equity firm in New Jersey, for a fire sale price estimated by analysts at $100-200 million. If the deal goes through, the new owners plan to continue plant operations as a hedge against rising natural gas prices.

The decision to sell Brayton Point makes sense to both parties within the current business context, but from a global perspective, it is stupid. Poised at the edge of climate system tipping points—on the very brink of the point of no return—the only reasonable action, if we are concerned about a future in which civilization remains possible, is a rapid shift away from fossil fuels and the immediate cessation of coal burning.

There is no means to argue for that common sense course of action in a private sale, so we choose to take the only avenue available to us: acting directly to block the process that is destroying our world.