The bill, titled “Small Scale LNG Access Act,” was introduced on Oct. 18 and calls for amending the “Natural Gas Act to expedite approval of exports of small volumes of natural gas.” The proposed legislation follows in the footsteps of the U.S. Department of Energy’s (DOE) proposed rule which would assume that all U.S. small-scale exports of LNG, with the gas mostly obtained via hydraulic fracturing (“fracking“), is in the “public interest” as defined by the Natural Gas Act.

The public commenting period for the DOE’s proposed small-scale LNG rule ended on Oct. 16, with 81 comments posted on Regulations.gov. DOE, alongside the U.S. Federal Energy Regulatory Commission (FERC), oversees the regulatory process for LNG exports and the industry has long complained that the process is too onerous.

“We write in support of the Department of Energy’s (DOE) proposed rule to expedite the approval of small-scale exports of natural gas,” they wrote. “We appreciate this proposal and the series of steps the Department has taken to decrease burdensome regulations and increase the United States’ energy security. The current permitting process for LNG export facilities is expensive, and small-scale projects often are not cost effective under current conditions.”

The Rubio-Cassidy bill also calls for small-scale LNG exports to be considered by default in the “public interest,” as defined in Section 3(c) of the Natural Gas Act.

Small-scale LNG does not refer necessarily to the actual amount of LNG which will be exported from the site, but rather the size of the tankers carrying the natural gas. Meg Gentle, CEO of Tellurian, said so herself in a March interview.

“So people have started talking about small-scale and mid-scale and we’ve sort of chuckled at that. As you would imagine, there is nothing small scale about LNG,” Gentle said. “It’s just making the refrigerator component itself a little bit more modular, repeatable and standardized. But we’re still using the largest [General Electric] turbines, the largest storage tanks ever built.”

In June, Cassidy also introduced the License Natural Gas (LNG) Now Act, which calls for expedited permitting for conventional large-scale LNG export projects. On the U.S. House side, Cassidy’s bill was introduced by U.S. Rep. Clay Higgins (R-LA), whose district sits in a major planned hub for the LNG industry.

Rubio and Cassidy both represent states which have companies interested in jump-starting the so-called small-scale LNG business. For Rubio, the company Eagle LNG has plans to export LNG from a small-scale facility in Jacksonville, Florida and Carib Energy intends to export LNG from Martin County, Florida. Cassidy’s state, meanwhile, is home to Cheniere’s Sabine Pass LNG terminal and Tellurian’s planned Driftwood LNG site.

In January, Eagle LNG received DOE authorization to export small-scale LNG from its site in Maxville, Florida, in September. Eagle LNG is owned by Ferus, Inc. and financed by Energy & Minerals Group. John Raymond, son of former ExxonMobil CEO Lee Raymond, serves as the CEO and co-founder of the Energy & Minerals Group. Lee Raymond also serves as a senior partner at the firm.

“As a streamlined and nimble operation, we’re able to respond quickly to the changing tides within the industry and swiftly develop solutions to any challenge, but the valuable resources and years of experience that Ferus holds give us the ability to turn our visions into realities,” Eagle LNG explained of its business model.

“Combining the know-how of the Ferus group of companies with the financial strength and commitment of our sponsor, the Energy & Minerals Group, Eagle LNG is unmatched in its capability to provide solutions to clients considering LNG for fueling and small-scale utility requirements.”

In June, Eagle LNG signed an agreement with ExxonMobil and the Jacksonville, Florida-based Crowley Maritime Corporation “to collaborate on the development of LNG as a marine fuel.” Crowley also owns Carib Energy, the first company ever to receive a small-scale LNG export permit from the DOE.

“ExxonMobil will provide its technical support and expertise to help the parties carry out safe bunkering operations and sell LNG bunker fuel to vessel operators,” explained the press release. “Eagle LNG Partners will supply the LNG and will design, build, and operate small-scale production and storage facilities as well as coordinate land-based LNG transportation. Crowley will provide bunker logistics and ensure safe and reliable operations.”

Rubio has taken over $1.1 million in campaign contributions from the oil and gas industry during his U.S. Senate career, which began in 2010. During his 2016 re-election run, Rubio took $10,000 from ExxonMobil, $5,000 from the American Petroleum Institute, $5,000 from Independent Petroleum Association of America (IPAA), $1,000 from Cheniere, and $7,500 from American Fuel & Petrochemical Manufacturers (AFPM).

Rubio also received $2,700 from Crowley for his 2016 race, while taking $68,340 from Koch Industries throughout his political career, the latter a company which has its own vested interest in small-scale LNG exports. Koch subsidiary Flint Hills Resources received a permit to ship batches of small-scale LNG from the DOE in 2016.

Like Rubio, Cassidy also became a senator in 2010 and has taken $62,200 in campaign contributions from Koch Industries throughout his Senate career. Cassidy received $3,500 from Cheniere during his 2016 re-election race, $2,000 from IPAA for his 2010 race, and $5,500 total from Exxon during both of his Senate races.

As another sign of his commitment to the cause, Cassidy asked Perry if the DOE intended to expedite the regulatory process for LNG exports in questions sent to the agency in July regarding its proposed 2017-2018 budget. 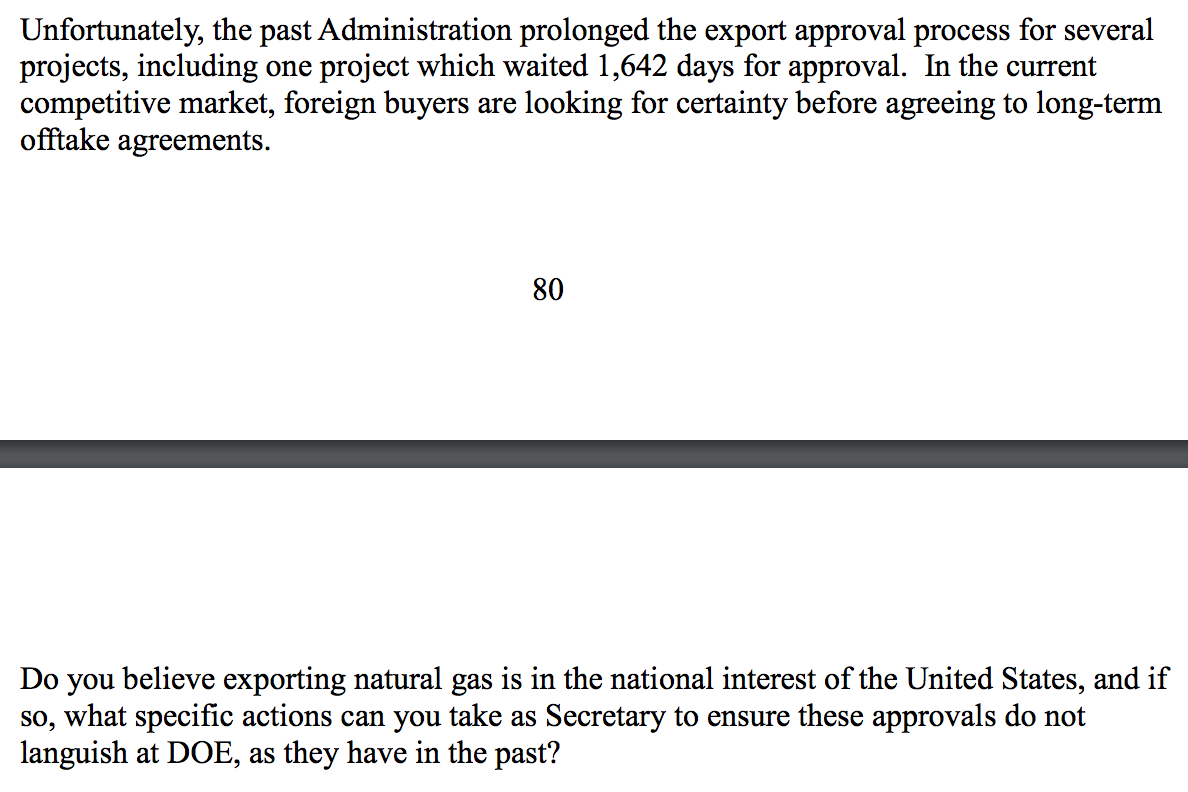 In response, DOE affirmed its commitment to LNG and exporting it in a robust way.

“Ultimately, the market will determine how much U.S. LNG export capacity is built and utilized,” wrote DOE. “In addition to promptly reviewing LNG export applications as part of our regulatory responsibility, DOE is working with the Administration, industry, other Federal and state government agencies, and our international partners to help U.S. companies maximize opportunities in the global LNG market.”

Both Rubio and Cassidy discussed explicitly how the industry will reap the benefits from the move in their respective states in the press release announcing the bill’s introduction.

“Expedited approval of small-scale natural gas exports would strengthen an emerging sector of Florida’s economy,” Rubio stated. “In addition to the economic advantages for Florida, this measure would bolster our existing ties with Caribbean and Latin American nations while ensuring that bad actors in the region, including Cuba and Venezuela, do not reap its benefits.”

Cassidy echoed Rubio in discussing how the bill’s passage would impact his own state, Louisiana, and the oil and gas industry located within it.

The Trump administration has also made its stance clear on small-scale LNG and its rationale behind the proposed DOE rule.

“The Trump administration is focused on finding ways to unleash American energy and providing a reliable and environmentally friendly fuel to our trading partners who face unique energy infrastructure challenges. The Department of Energy and this Administration are wholeheartedly committed to strengthening the energy security of the United States and our allies,” Perry said in a September press release announcing the proposed rule.