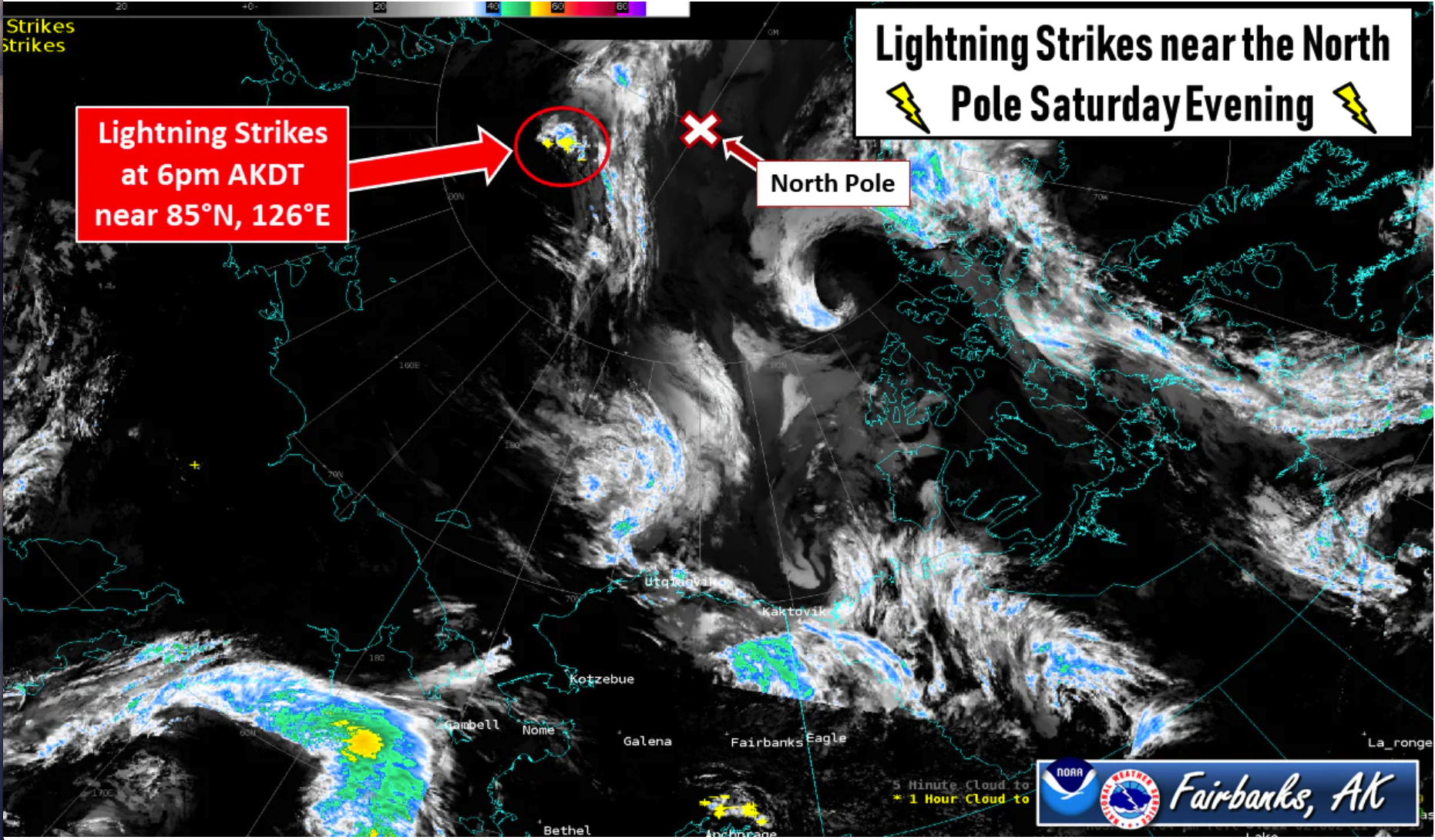 Lightning strikes within 300 miles of the North Pole on Aug. 10. NWS Fairbanks

Forty-eight lightning strikes were detected within 300 miles of the North Pole on Saturday, The Washington Post’s Capital Weather Gang reported Wednesday. The event was so unusual that the National Weather Service (NWS) published a statement.

“This is one of the furthest north lightning strikes in Alaska forecaster memory,” NWS Fairbanks, Alaska said.

Lightning is less likely near the North Pole, as National Geographic explained, because it forms when warm, wet air sits under cold, dry air, destabilizing the atmosphere. Warm air isn’t common in the high Arctic. But this has already been an unusual summer for the far North as it feels the effects of the climate crisis: Alaska is free of sea ice, Greenland‘s ice sheet melted at record rates and a wildfire continues to burn in the West of the country.

The lack of sea ice means warmer sea surface temperatures, which may have made the Arctic atmosphere unstable enough for the lightning to form, The Washington Post speculated.

Saturday’s lightning was detected by the Vaisala GLD360 network, which picks up on lightning through a global network of radio receivers, according to National Geographic. The strikes were first reported in a tweet from NWS Fairbanks, which located them at around 85 degrees North.

A number of lightning strikes were recorded Saturday evening (Aug. 10th) within 300 miles of the North Pole. The lightning strikes occurred near 85°N and 126°E. This lightning was detected by Vaisala's GLD lightning detection network. #akwx pic.twitter.com/6jdxeMPBdH

Inventor of the GLD360 network and Vaisala research scientist Ryan Said told National Geographic that lightning occurs almost every summer in parts of the Arctic circle like Siberia and Northern Alaska, but is rare north of the Arctic Ocean coastline. He dug into the archives to see just how rare, and found that, between 2012 and 2018, there were only three times when lightning was detected north of 85 degrees. A maximum of seven discharges were detected per storm, according to The Washington Post.

“For comparison, in the storm last weekend, we observed over three times that number (over 1,000 [discharges]) north of 80 degrees, with 48 discharges north of 85 degrees,” Said told The Washington Post in an email.