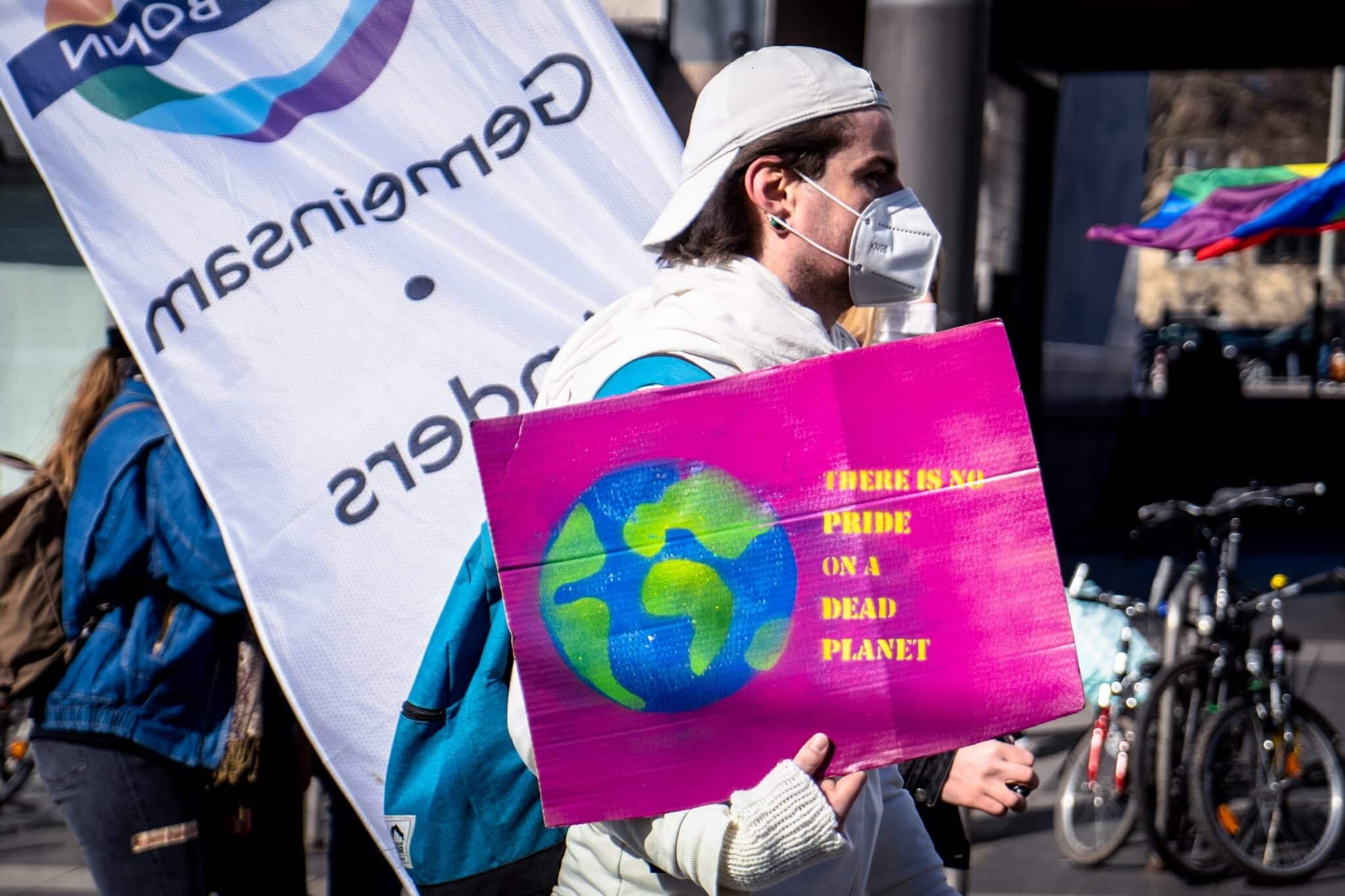 Photo by Mika Baumeister on Unsplash

The climate crisis affects all of us who live on planet Earth. But, it doesn’t affect us all equally.

According to the findings of the Intergovernmental Panel on Climate Change (IPCC), marginalized populations — including the queer community — will experience the greatest impacts of climate change.1

Research shows that marginalized communities are more susceptible to discrimination, exclusion, and violence, which too often leads to homelessness or inadequate housing in areas more likely to feel the impact of air pollution or flooding.2 A report by Princeton also found that low-income and minority communities are more likely to live near industrial facilities, and therefore are at a higher risk for chemical exposure.3

As we work to combat climate change, we must also work to fight the hatred and stigma the lesbian, gay, bisexual, transgender, queer (LGBTQ+) community faces every day. So this Pride Month, EcoWatch has chosen to highlight some of the individuals in this community that are using their platforms to do both of those things.

Fortunately, there are hundreds of LGBTQ+ environmental activists working hard to eradicate these inequalities and work toward a more sustainable and equitable future. While Pride Month may only last 30 days, these climate leaders work 365 days a year to better the planet and all those who inhabit it.

Rose Marcario (she/her) served as the CEO of Patagonia for more than a decade and is credited with leading the outdoor retailer through record profits and new environmental commitments.

She left the company in 2020 in an effort to pursue more direct ways to fight climate change, including becoming a board member for Meati Foods (a plant-based meat-alternative company) and Rivian (an electric vehicle company). Most recently, Marcario became a partner at RenGen Ventures, a company that funds “regenerative technologies” — or innovations that work with nature instead of against them.

If you didn’t think it was possible to rock climb in heels, Pattie Gonia will prove you wrong. Drag Queen and environmentalist extraordinaire, Pattie Gonia first rose to fame on TikTok in December of 2020.

She’s known for bringing attention to environmental mistreatment with clever quips on everything from climate change to littering while strutting in beautiful dresses made out of trash, leaves and other zero-waste items. Out of drag, the gay man behind Pattie is Wyn Wiley, a photographer and self-proclaimed intersectional environmentalist from Nebraska.

Deseree Fontenot (she/her and they/them) is the co-founder of the Queer Ecojustice Project (QEP). The platform creates collaborative projects focused on ecological justice and queer liberation to catalyze culture, consciousness and community.

Fontenot is a queer black organizer, farmer and grassroots ecologist with a passion for land and liberation, climate justice and ecological education. Before co-founding QEP, Fontenot was a co-organizer of the People of Color Sustainable Housing Network and is currently part of the staff collective for the Movement Generation Justice and Ecology Project in Oakland, California.

Vanessa Raditz (they/them) co-founded QEP alongside Fontenot and they, too, have an extensive resume. Raditz is a queer biocultural geographer, educator and storyteller. They’re dedicated to community healing, opening access to land and resources, and fostering a thriving local economy based on ecological resilience.

Raditz co-organized the Queers4ClimateJustice movement, serves on the board for OUT for Sustainability and directed a documentary called “Fire & Flood: Queer Resilience in the Era of Climate Change,” after their own experience with the 2017 Tubbs fire.

Oh, and Raditz is also currently working toward a Ph.D. at the University of Georgia, so that’s soon to be “Dr. Raditz ” to you.

Joseph Toolan (he/him) is a Guatemalan-American who raises environmental awareness and stewardship in his role at the Chesapeake Bay Trust — a nonprofit grantmaking organization in Annapolis, Maryland. Toolan leads the Diversity, Equity, Inclusion and Justice work for the Trust and focuses on the management of conservation and youth environmental education.

Toolan’s advocacy goes way beyond the Trust, though. He’s also Chair of the Board of Annapolis Pride, Chair of Maryland’s LGBTQ Affairs Commission and is involved in several other organizations, including OUT for Sustainability.

Rachel Kyte (she/her) made history as the first female dean at the Fletchers School at Tufts University after teaching as a professor in sustainable development. She’s also the former CEO of Sustainable Energy for All (SEforALL), an international organization that works in partnership with the United Nations and leaders in the private sector, philanthropies and other organizations to create equity around sustainable energy.

Paul Gestos (he/him) is a New York-based environmental activist who is focused on encouraging others, especially marginalized communities, to join the climate movement.

He served as the national coordinator for the People’s Climate Movement and co-authored the book “Tools for Radical Democracy: How to Organize for Power in Your Community.” Currently, Getsos is project director for United Today, Stronger Tomorrow, an organizing project to help improve inequalities that were brought forward by the COVID pandemic.

Isaias Hernandez (he/him) is a Mexican-American environmental educator and founder of Queer Brown Vegan — an Instagram account with more than 100,000 followers aimed at teaching others about environmental justice, veganism and how to live a zero-waste lifestyle.

Hernandez has grown beyond the social media platform, attending climate summits and speaking at events about how environmentalism and sustainability have helped him with his identity. Growing up in a low-income household, Hernandez uses his platform to bring awareness to climate inequalities faced by low-income and marginalized communities.

HUG is focused on food independence, partnering with community organizations to produce and distribute fresh, affordable, healthy, sustainable and culturally appropriate food to lower-income families. Through HUG, Jackson has also hosted a Black Earth Day event and worked to build a Food School to teach minority communities how to garden.

You may recognize Christine Hallquist as the first trans majority-party candidate for governor in the U.S., but she’s made great strides for climate change outside of politics.

Hallquist served as the CEO of the Vermont Electric Cooperative for more than a decade, helping to transform the energy company into a leader in the renewable electricity space. She continues to work to fight climate change and bring more sustainable energy solutions, including solar energy, to her home state of Vermont.

Looking for ways to support the LGBTQ+ community in the fight against climate change and inequalities? Here are a few organizations dedicated to the cause, some of which are founded and/or supported by the climate leaders mentioned in this article. We’ve included their mission statements below and encourage you to get involved.

Meet the Women Leading and Shaping the Solar Industry

How to Be a Solar Advocate