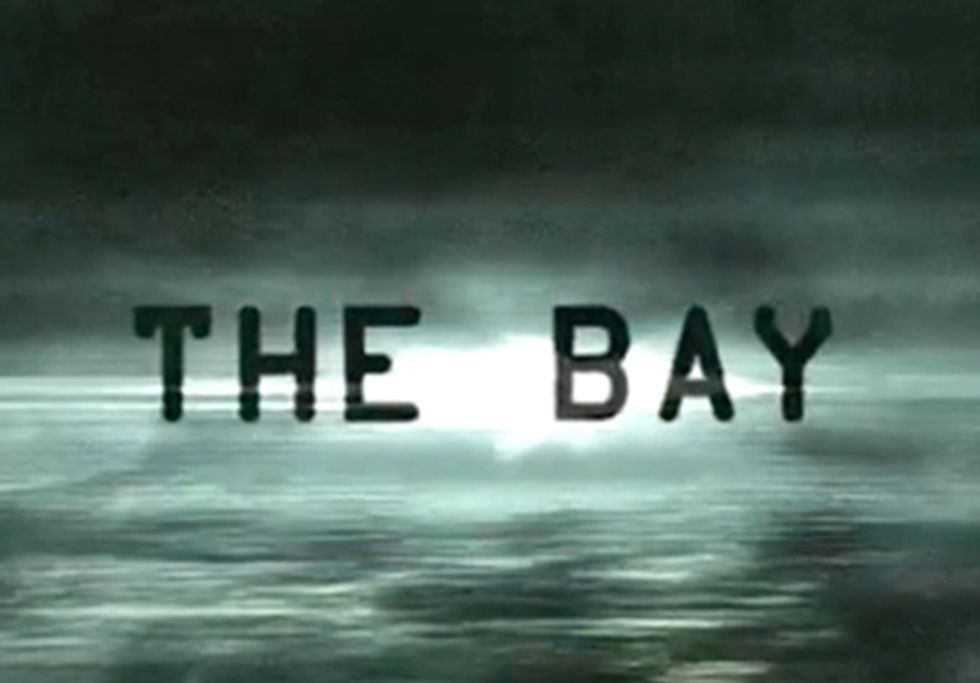 911. What are you reporting?  There's something really wrong. Help me!

Fourth of July. A quaint, idyllic, small town on the Chesapeake Bay, the largest inlet on America's Atlantic coast, prepares for annual Independence Day festivities. Little does the quintessential American town know something is seriously wrong with the water. First there are dead fish floating everywhere in the bay as isopod parasites eat the fish from the inside out.

Next the isopods get into the towns drinking water supply, and swimmers and people drinking the water start getting infected. Suffice it to say, the rest of the story isn't pretty.

The Bay, Oscar-winning director Barry Levinson's new film inspired by the plight of the Chesapeake Bay opening in theaters tomorrow, lies somewhere between the mesmerizing horror film 28 Days and AMC's The Walking Dead. It echoes Steven Soderbergh's realistically haunting, nowhere is safe film Contagion, and makes the audience think, yes, this could happen to us.

Importantly, the creative genesis of the film was when Levinson was asked to direct a documentary about the environmental crisis affecting the Chesapeake Bay, which as a local Baltimore, Maryland native he knows well. But, instead of making a documentary, Levinson thought making an eco-horror film might have more of an impact on raising consciousness about the fragile health of the Chesapeake Bay. Despite wanting to entertain as a filmmaker, the acclaimed director is not hiding his eco-agenda: a title card in The Bay states that the Chesapeake Bay is 40 percent lifeless.

While The Bay is certainly an exaggeration meant to frighten people, like any good horror flick should, the water we swim in, fish in or drink from can make people sick. Levinson says 85 percent of the film is drawn from scientific facts.

“We certainly don’t think the conditions described in the film are within the realm of possibility,” said William C. Baker, president of the Chesapeake Bay Foundation in a New York Times article. “But they are a literary exaggeration of real issues that the Bay does confront.”

The Chesapeake Bay is the largest estuary in the U.S. and the third largest in the world. Its watershed encompasses the District of Columbia, as well as six states, including Delaware, Maryland, New York, Pennsylvania, Virginia and West Virginia. Massive pollution in the Chesapeake Bay is seriously degrading the environment and adversely impacting the health of people and other species in the region. Pollution comes from industrialized agriculture and urban sprawl. Besides run off from roads, pesticide and herbicide laden lawns, toxic manure waste from factory farms leech into the environment containing a foul mixture of pathogens, antibiotics, cleaning fluids, heavy metals and pesticides.

The movie is presented as a whistle blower documentary depicting the town being infected by the flesh eating organisms which take control of the inhabitants minds and bodies. The horrific story unfolds as pieces of information are strung together from digital recordings, cell phone videos, voice mails, surveillance cameras, police dash-cams and footage from a young journalist, all of which was confiscated by the government in attempts to cover up the incident.

The trailer of The Bay ends with the words of a character saying: "I am going to show the world what happened here. If you find this tape, please get it out."

In a way, Levinson might have meant these words as a message about revealing the truth and showing the world we must clean up the grossly polluted Chesapeake Bay.