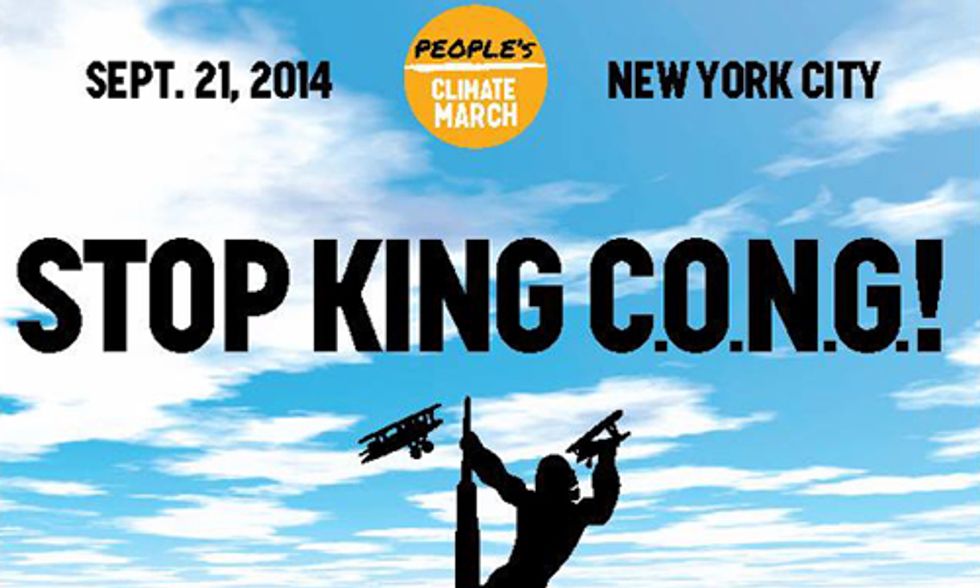 Above all, the worldwide People's Climate March on Sept. 21 must bury King C.O.N.G.: Coal, Oil, Nukes and Gas.

Which also means abolishing corporate personhood and saving the internet.

The fossil/nuclear corporations have been given human rights but no human responsibilities. They’re about to gut our most crucial means of communication.

They’re programmed to do just one thing: make money. If they can profit from killing us all, they will.

Ironically, we now have the technological power to get to Solartopia—a socially just, green-powered planet.

But our political, economic and industrial institutions answer to Big Money, not to us or the Earth.

On Sept. 21 some of us will carry to the UN a petition with more than 150,000 signatures, demanding that Fukushima be turned over to a global authority.

Meanwhile, Tokyo Electric Power makes huge profits from the “clean-up” at Fukushima.  It’s turned much of the labor force over to organized crime.  And more than 300 tons of radioactive liquid still pour into the Pacific every day, while downwind children suffer a 40-times-normal thyroid cancer rate.

So do coal, oil and gas.

March organizer Bill McKibben says fracked gas is just as bad for global warming as coal. Oil is even worse.

But we’re in the midst of a great revolution. Solartopian technologies—solar, wind, tidal, geothermal, ocean thermal, sustainable bio-fuels, mass transit, increased efficiency—are all plunging in price and soaring in efficiency. They can completely green-power our Earth. They can allow individuals and communities to control our energy supply, democratizing our society.

But they can’t come without transforming the corporation.

As long as our chief economic engine has no mandate but to make money, dominates our political system, claims legal personhood and is not held accountable for the damage it does, our species is doomed.

Congress is now debating a constitutional amendment to strip corporations of their illegitimate, illegal personhood. This must happen to save our democracy and our eco-systems.

But the debate appears virtually nowhere in the corporate media ...

...Except for the internet, which the Federal Communications Commission may soon gut by killing net neutrality.

Without a free and open internet, and without ending corporate personhood, our efforts to stop King C.O.N.G. and save our ability to live on this planet will go nowhere.

So as we march to stop climate chaos, as we contemplate divestiture campaigns, as we demand a global take-over at Fukushima, as we work to win a Solartopian future ... we must see the whole picture.

The corporate beast that’s killing us all draws its power from a lethal mutation with no basis in law or sanity.

Without a free and open internet to bring it down, our struggle to survive is in serious jeopardy.

But to do so we must preserve net neutrality, transform the corporation and bury King C.O.N.G. in the Solartopian compost heap.

Harvey Wasserman edits www.nukefree.org and wrote SOLARTOPIA!  Our Green-Powered Earth, where King C.O.N.G. made its literary debut, at last brought to visual life by Gail Payne at www.nirs.org .