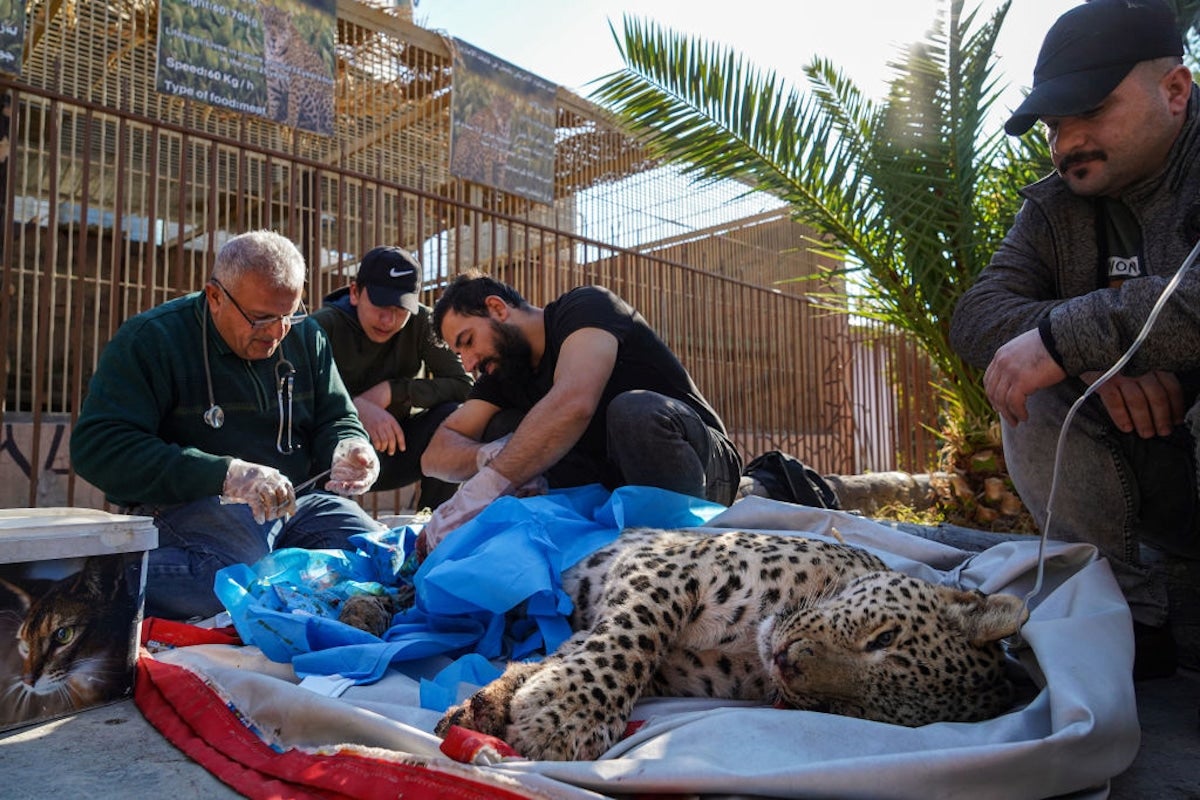 A Persian leopard lies unconscious while a veterinarian with the Kurdistan Organization for the Protection of Animal Rights amputates one of his hind limbs at the Duhok Zoo in Iraq on Dec. 31, 2021. Ismael Adnan / picture alliance via Getty Images

Six weeks ago, a rare Persian leopard caught its leg in a trap set by a villager in the Batifa area in the autonomous Kurdistan region of Iraq. The leopard has since had to have its leg amputated, and wildlife experts say it cannot return to the wild. Currently held in a zoo in Iraq, the leopard may face further challenges as the region doesn’t have the resources necessary to rehabilitate the animal.

After an evaluation, Tameer estimated that the leopard was caught in the trap for about 10 days and likely lost a lot of blood as well as faced broken bones and a punctured artery. The vet amputated the lower part of the leopard’s leg as quickly as possible.

Then, the International Union for Conservation of Nature (IUCN) assembled a team of experts to help the leopard, which underwent a second amputation that removed the leg from just below the hip joint.

Although the leopard is on the path to recovery, its missing leg means this animal cannot be returned to the wild. Estimated to be about 5 or 6 years old with a lifespan of 10 to 15 years, the leopard can no longer hunt without its hind leg.

For now, the leopard remains in the zoo, but wildlife experts hope to find someplace more suitable for it, as the sounds and smells of the zoo are stressful to the leopard.

“The best is to go to a rehabilitation centre, otherwise it will be a captive animal and in a zoo all its life,” Tameer told The Guardian. The vet also said that there are unfortunately no rehabilitation facilities anywhere nearby.

The Persian leopard is an endangered subspecies with less than 1,000 in the wild. There are estimated to be only 20 to 25 of the leopards left in Iraq. Removing this rare leopard could put the local population at risk, but at this time, the region does not have the resources to breed the leopard and conserve its numbers.

Some experts suggest moving the injured leopard to European facilities for care and breeding, but at this time, the local government plans to keep the animal in the region under vet supervision.