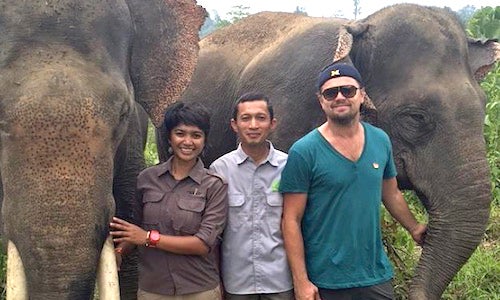 Leonardo DiCaprio is using his clout to protect the struggling Leuser Ecosystem, a precious rainforest in Sumatra, Indonesia that’s under threat from industrial development for palm oil.

The Oscar winning actor and prominent environmental activist spent the weekend in the forest with fellow actors Adrien Brody and Fisher Stevens. According to The Jakarta Post, the crew toured Mount Leuser National Park on Sunday where they stopped by the park’s research facility and met three Sumatran orangutans.

During his visit, DiCaprio also posed for a photo with two conservationists and two endangered elephants. The Revenant star posted the image onto his Instagram page and in the accompanying caption, he warned that the expansion of palm oil plantations are “fragmenting the forest and cutting off key elephant migratory corridors, making it more difficult for elephant families to find adequate sources of food and water.”

He added that his philanthropic foundation, the Leonardo DiCaprio Foundation, is supporting local partners to establish “a mega-fauna sanctuary in the Leuser Ecosystem.”

🐘 Together we can save the Leuser Ecosystem. The last place on earth where elephants, tigers, rhinos and orangutan… https://t.co/GhNYEUaoip

The iconic Leuser Ecosystem, located in the provinces of Aceh and North Sumatra, consists of 6.5 million acres of tropical lowland rainforests, mountains and peatlands. As DiCaprio noted, the area is the last place on Earth where Sumatran orangutans, tigers, rhinos and elephants coexist in the wild. Without protection, these wildlife species are likely to be pushed to extinction.

On his Twitter account, DiCaprio posted the same photo from his trip and tweeted, “Stand with @haka_sumatra to #SaveLeuserEcosystem,” referring to his support of Forest, Nature and Environment of Aceh (HAkA), a Sumatra-based NGO which works to protect and restore the priceless ecosystem.

In January, Aceh citizens filed a class action lawsuit against the Aceh provincial government’s Spatial Land Use Plan, “which would open Leuser’s forests up to clearing for logs, mining and oil palm,” Mongabay reported.

This fight has been going for years, and had involved many people and organizations in Aceh. The Governor and Aceh Parliament has been ignoring us. I wish that you could hear our aspiration and take action. What I wish is not a complicated matter, and has a clear legal standing. If you and your officials in The Ministry of Domestic Affairs can implement the Minister of Domestic Affairs Decree No. 650-441/2014, by canceling the Aceh Spatial Plan 2013-2033 that excluding the Leuser Ecosystem in to the National Strategic Area. The cancellation will become an important beginning for developing the spatial plan that inline with our interest, the people of Aceh.

Leuser is not only a biodiversity hotspot, it provides more than 4 million people with water, clean air and disaster mitigation. The ecosystem is also critical in helping to regulate the Earth’s climate by absorbing and storing carbon in its lowland rainforests and peatlands.

The lawsuit and the movement to protect the Leuser Ecosystem is captured in this video:

DiCaprio’s support of Leuser coincides with his speech at the World Economic Forum in Davos earlier this year, where he announced his foundation’s $15 million commitment to environmental projects, including one that protects the Leuser Ecosystem from what DiCaprio described as the “invasive and destructive practices” of the palm oil industry.

“We are in a race against time to stop the extinction of the Sumatran orangutan, tiger, rhino and elephant,” Rainforest Action Network’s program director Ginger Cassady said in a statement. “Companies like PepsiCo that profit from conflict palm oil connected to the destruction of the Leuser Ecosystem must act immediately to break the link between the products they sell and rainforest destruction, labor abuses and climate pollution.”

The organization noted in a press release that PepsiCo consumes more than 427,500 tonnes of palm oil per year and its consumption of this controversial commodity is on the rise.