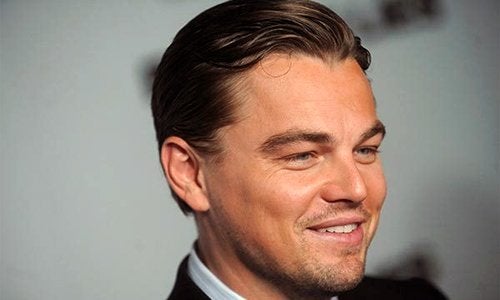 The book, written by Kayla Olson, has not yet been published, but attracted DiCaprio because of its environmental themes, The Hollywoood Reporter said.

Set in 2049, the book chronicles Earth at a breaking point due to climate change, coastal flooding and overpopulation. As humanity struggles to survive, a radical faction known as the Wolfpack overthrows the government and takes control.

“The story centers on a young woman named Eden who escapes a Wolfpack labor camp, joining three others fleeing to an island,” Variety explained. “During her journey, she will find clues as to what happened to her missing father and find out that she is the key to bringing down the Wolfpack.”

Many have noted the novel’s parallels to the wildly successful Hunger Games series.

Olson took to Twitter to express her excitement about the news, though it’s not clear when her novel will be published. She said on Twitter that it would not be out “for a while yet,” but there would be “news on that coming soon.”

Oh my goodness—I so appreciate you all being so excited with me! Thanks, everyone, for your kindness and support. ?

As for DiCaprio and his team, Appian Way is a “serial purchaser of rights to promising Hollywood projects, not all of which see the light of day,” The Guardian said. But it’s not surprising that DiCaprio wanted to take a chance on The Sandcastle Empire, given his passion for environmental issues.

Through his charity foundation, the film star has donated millions to environmental causes around the world. Last month, he announced that his organization would donate another $15 million to various environmental projects. He has repeatedly called for action on climate change and a transition to 100 percent renewable energy.

Last week, DiCaprio met with Pope Francis to discuss, as the Vatican put it, “how they can work together to address the immediate need for major action to stop the devastating impacts of climate change from leaving permanent scars on our planet.”